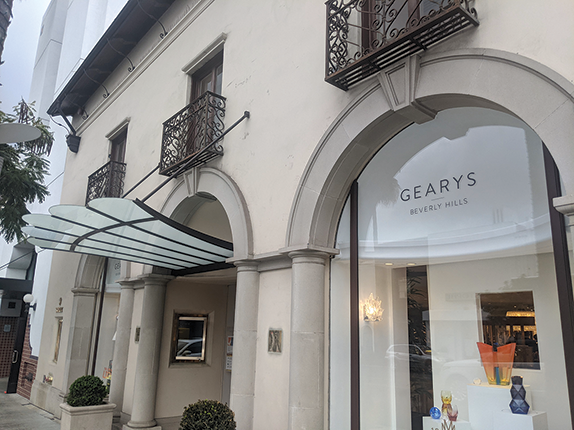 Gearys Beverly Hills has been open for more than 90 years. (photo by Justin Sayers)

The program, which started in 2019, venerates locations that have cultural significance in the city. The first three Golden Shields were awarded that year to the Doña Maria Rita Valdez de Villa Homestead at Sunset Boulevard and Alpine Drive, the original Lawry’s Restaurant on North La Cienega Boulevard and the original Giorgio Beverly Hills on Rodeo Drive. This month, the fourth, fifth and sixth Golden Shields were awarded to Nate ‘n Al’s delicatessen on North Beverly Drive, Gearys Beverly Hills on North Beverly Drive and the site of the former Gershwin residence on North Roxbury Drive.

“I see them as icons and truly like the heart and soul of our community. Really why we love our city is for reasons like Gearys Beverly Hills, a family business, beloved, who has been in our community for over [90] years; and Nate ‘n Al’s and a home like the Gershwin residence,” Councilwoman Lili Bosse said.

The council can ultimately grant Golden Shields to three sites per quarter, for a total of 12 per year, and Mayor Lester Friedman praised the current nominees and encouraged more sites to be put forth for consideration.

“I think the choices are excellent,” Friedman said. “Nate ‘n Al’s, as well as Gearys, have been institutions in our community, and the Gershwin home area is worthy of recognition. I’m sure there are other locations the Cultural Heritage Commission is looking at, and I look forward to them bringing those forward.”

City staff and council members lauded the luxury boutique store Gearys Beverly Hills, which has operated in the city for more than 90 years, and Nate ‘n Al’s, which opened in 1945 and is the third-oldest Jewish deli in the Los Angeles area.

“The delicatessen also represents the rise of the Jewish population in Los Angeles in the 1940s and rapidly became a gathering place for the Jewish community,” said Mark Odell, urban designer for Beverly Hills’ Community Development Department.

While the deli and boutique were unanimously praised, the Gershwin residence drew some scrutiny, as the house in which George and Ira Gershwin composed some of their biggest hits – which was later home to singer and actress Rosemary Clooney for many years – was torn down, and a new home has been built on the site.

“I think it’s important that people understand that something different was there before, and we’re recognizing the contribution of the men and not the house that’s currently sitting there, regardless of what you think of that house,” Gold said.

“It was a tragedy in many ways when the Gershwin house itself was torn down. We did not have this commission, and perhaps if we had, it would still be there with an owner who loves it for what it is, and that was sad. That said, this is a way for us to sort of remember it,” Councilman John Mirisch said.

Mirisch proposed that the bronze plaques could be tied to geolocators, where visitors on a walking tour could pull up information and photographs of the sites through the years.

“It’s a way to tie our history and make it living,” Mirisch said.

With six Golden Shields now approved, city staff will work toward an installation ceremony, which was delayed for the first three shields by the ongoing coronavirus pandemic.

“We’re working on, how do we get the first ones installed and, when it is safe to do so, have some sort of a ceremony,” Community Development Director Ryan Gohlich said.

“We’re ready to install as soon as the health guidelines allow,” Odell added.