Asian American leaders call for an end to hate 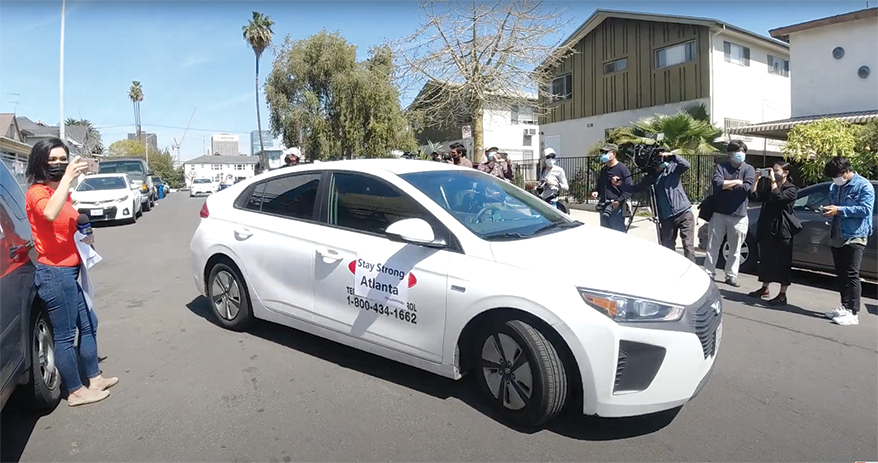 Approximately 100 cars participated in a parade on March 19 to raise awareness about hate crimes targeting Asian Americans. (photo courtesy of the KAFLA)

Local public officials and community leaders have denounced a recent increase in hate crimes targeting members of the Asian American and Pacific Islander community. Attacks against the AAPI community have steadily increased during the COVID-19 pandemic, authorities said, and public outcry was heightened after a mass shooting on March 16 in Georgia claimed eight lives, including six women of Asian descent. On March 19, dozens of people participated in a car parade on the streets of Koreatown to raise awareness about crimes against the AAPI community and to send a message that hate will not be tolerated. Organized by the Korean American Federation of Los Angeles, the parade included approximately 100 vehicles.

“Enough is enough,” said James An, president of the Korean American Federation of Los Angeles. “For more than a year, our society has failed to properly acknowledge thousands of documented attacks on Asian Americans and Pacific Islanders. The Atlanta killing spree is only the latest and most vicious of these hate crimes. It is very clear this was a targeted killing [at] three Asian-run businesses. We need to call it like it is – a hate crime involving Asian Americans. Innocent people went to work one day and didn’t come home.”

“The LAPD stands by the AAPI community and the community organizations taking a stand and putting out the united front that hate has no place in our society,” LAPD Deputy Chief Blake Chow said. “Our message to the community is we have an intolerance of hate crimes and hate incidents. I want to encourage people, encourage the community, that if you see something, say something. I know we have used that mantra many times, but if you see an incident that rises to the level of a hate incident or a hate crime, we need you to call 911 or flag down an officer, because we will send an officer out to do an investigation. We need you to report it. We need the public to call us if they see something.”

“After what happened a week ago in Atlanta, I am not only angry, our community is angry. This comes on the heels of 2020 when we saw an increase in hate crimes in the Asian-American community,” said Los Angeles City Councilman John Lee, 12th District. “We cannot be quiet about the injustices that happened to our community or any other community. We need change, and that change begins with all of us.”

Los Angeles City Attorney Mike Feuer also stood by the AAPI community and said he will do everything he can to address the problem.

“With pandemic-fueled hate incidents surging against Asian Americans, it’s vital to stand with our AAPI community and commit ourselves to confronting aggression and discrimination in all its forms,” Feuer said. “From the early days of COVID, my office has worked to protect our Asian-American neighbors, and we’ll continue to collaborate with community members and law enforcement partners to tackle this disturbing trend head-on. I want to emphasize that my office’s Hate Crimes Unit will thoroughly review any case referred to us and, when it’s warranted, aggressively prosecute.”

The city of West Hollywood also condemned the attack in Georgia, and ordered that flags in the city be flown at half-staff through March 22 in commemoration of the victims.

“Horrified by the news of the mass shooting in Atlanta,” Lieu tweeted on the day of the murders. “Our hearts go out to the families of all the victims of this terrible act and the entire AAPI community. Enough is enough. We must join together in the fight to stop AAPI hate.”

Authorities said anyone who is a victim or witnesses a hate crime should call 911. If the crime occurred previously, people should contact police in the city where the crime occurred. Crimes may be reported to the LAPD by calling (877)LAPD247, the Beverly Hills Police Department by calling (310)550-4951, and the West Hollywood Sheriff’s Station at (310)855-8850.