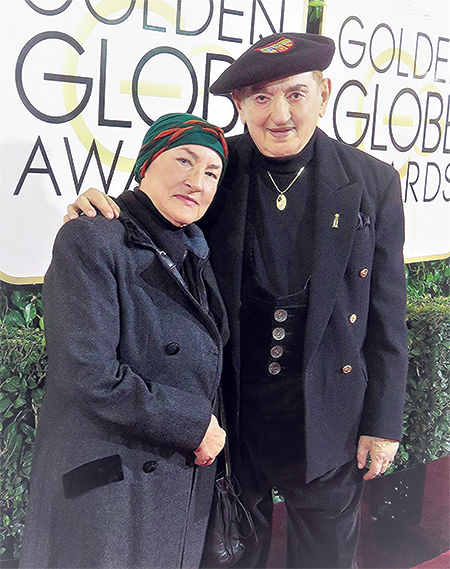 Ray Arco, right, died on Christmas Day after he contracted COVID-19 while in a coma. (photo courtesy of Yoram Kohana)

Ray Arco, a long-time member of Hollywood Foreign Press Association, died on Christmas Day, his family recently disclosed. He was 91.

The long-time West Hollywood resident slipped and fell in September, suffering a concussion and brain hemorrhaging that put him in a coma. He died in the hospital just weeks short of his Feb. 2 birthday.

He was born Raul Alteresco in 1929 in Bucharest, Romania to a middle-class Jewish family. With the rise of Nazi Germany and the looming threat of a war, Arco, aged 12, was brought to California by the Red Cross. He later enrolled to study acting at the Pasadena Playhouse and motion pictures at UCLA in 1956. He minored in education and journalism.

He spent the early part of his career in public service work. His master’s thesis dealt with issues of education, environment and identity focusing on emerging nations’ struggles with basic education, health and self-government. He was invited to present his findings at the Agency for International Development in Washington, D. C.

He brought his knowledge and ideas to Native American organizations in Arizona and Colorado, working on youth leadership, poverty, environment and economic growth issues, responding quite early to the zeitgeist. Even before they became popular, he studied and wrote about ecological issues, especially as they impact marginalized societies in Africa, the United States and Canada, working with Native American and Canadian First Nations councils and organizations. He met with Sen. Robert F. Kennedy to discuss forming a Youth in Service of Humanity NGO and an affiliated Global Youth Awards program.

He meanwhile teamed with another HFPA member, French journalist and the late cinematographer Gerard Alcan, to work on several documentary and feature films ranging in places like Iran, Germany and Mexico.

He also tried his hand in importing films, coordinating symposia and managing concert tours. Drawing on his connections and knowledge, he brought music and film productions to his native Romania, including working with a German concert promoter on a TV special, “Halloween Variety Music Carnival with Hollywood Stars,” from the original Dracula fortress in Transylvania.

After the Romanian revolution and overthrow of the communist dictatorship, Arco worked with the new government to promote tourism and entertainment production. That included the Romania stop in Michael Jackson’s “Dangerous” World Tour on October 1, 1992, which sold out the 90,000-seat Bucharest National Stadium; HBO’s documentary of the event became its most-viewed program.

His most successful visit to Romania was in July 1974, when he met Ileana Matac, the daughter of an impoverished Romanian Gypsy couple, who later worked her way to a doctorate in art history. She was a museum curator in Bucharest, where he met her during a press trip. She was engaged to be married to a colleague. But after a whirlwind four days of courtship worthy of a Hollywood romantic movie script, Arco proposed and brought his bride to Los Angeles.

It was a match made in heaven both romantically and professionally: Ray, a polymath, created a steady stream of prose, poetry, scripts, music and art, and Ileana became his editor, curator and archivist.

By her count she has catalogued some 3,000 poems, 51 books, 36 scripts and numerous essays, interviews and articles. Only one slim book of poetry, “Exotic Spirited Poems” (1967), has been produced.

Ray Arco joined the Hollywood Foreign Press Association in 1960, and has written for publications in a number of countries over his six decades, including in his native Romania, Israel, Hong Kong, Singapore, Thailand and Denmark. He was appointed 12 years ago to be the Hollywood correspondent of Observaterul (The Observer), a Romanian language magazine published in Toronto, Canada, for the Romanian diaspora worldwide.

He took his frustrations and disappointments in stride, living for some 50 years in the same modest apartment, crammed floor to ceiling with his unpublished work, never losing his optimistic frame of mind.

In a poem he wrote for Ileana, on their 45th and last anniversary on July 4, he said:

“THANK YOU SO MUCH!…

For being in my Life,

For translating my nonsense comments,

For editing my lunacy,

For organizing my silliness,

For guiding my foolishness,

For denying that I’m totally mad,

For contributing to our Life’s Symphony!”