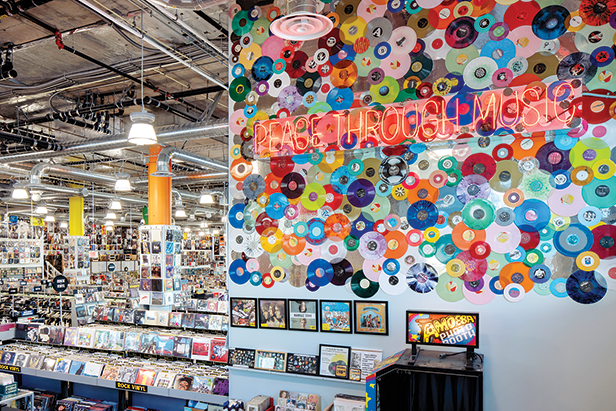 The new Amoeba location in Hollywood will offer DVDs and Blu-rays, posters and books in addition to music and merchandise. (photo courtesy of Amoeba)

Famed records store Amoeba Music Hollywood will reopen in its new location next week. Amoeba, which closed a year ago in response to the COVID-19 pandemic, has readied its new location at 6200 Hollywood Blvd. for an April 1 grand opening, said Kara Lane, the marketing/events director for Amoeba.

“With all the anticipation, [April 1] was the soonest we could be ready to open the doors. There’s no April Fools’ association intended, but we’ve been answering many social media questions, and it for sure is real,” Lane said.

The opening event, which is being held on a Thursday so the store can test its systems with less demand than presented by “a potentially busier weekend,” will feature limited edition posters as a gift with purchase, Lane said.

She added that Amoeba is “already being overwhelmed by the positive response to picking an opening day” for its new location, which is in the ground floor of the El Centro complex near Hollywood and Vine.

Amoeba, which was located at Sunset and Cahuenga boulevards for two decades, has a passionate fanbase, many of whom were disappointed when the Sunset site was approved for a 26-story mixed-use building in 2019.

However, the move to a new location comes with benefits for customers, especially when it comes to transportation. Not only can customers drive – parking validation is included with purchase – but bus lines and the Metro Red Line subway serve the new Amoeba home, which is near the Pantages Theatre, Funko Hollywood and the Fonda Theatre.

“Being right in the heart of Hollywood was the main goal,” Lane said. “The neighborhood in general has been great for us, visitors and locals being able to get to us. We preserved that while making it easier in some ways with the Metro right there.”

Kristopher Larson, president and CEO of the Hollywood Partnership, the nonprofit that oversees the Hollywood Entertainment District, said in a statement they are “so excited for the teams at Amoeba Music and at the El Centro community for this great addition to Hollywood Boulevard.”

“It is such a statement to the brand power and positioning of Hollywood that Amoeba made staying in the community a priority as they sought out a new home,” Larson said. “Additionally, the reopening comes at an important turning point for the recovery of the storefront economy in our community, as months of closures and quarantine are giving way to reopening, the return of tourism and an improved outlook on the resiliency of Hollywood.”

Entertainment industry stars have joined the business community in welcoming Amoeba back to business in Hollywood. Famed artists such as Flea of the Red Hot Chili Peppers and actor, comedian and drummer Fred Armisen expressed excitement about the new Amoeba location in a statement released by the store.

“There are very few things on this Earth that could make me happier than leafing through rows and rows of records, marveling at all the music, the artwork, the worldwide family of musicians that are all brought together in a great record store,” said Flea, who attended Fairfax High School. “Since I earned my first pennies as a teenager, I’d spend them carefully after hours of researching through the records at my local record store. There is no better place for this sacred search than Amoeba. I am thrilled they are reopening and will spend untold hours there digging through their treasures.”

Beyond serving customers, musicians and artists will also eventually return for in-store signings and performances, Lane said. The store will comply with COVID-19 restrictions – reduced capacity limits and mask requirements, among other measures – when it reopens, and once it’s safe, performers will once again take the in-store stage.

“Like live music venues everywhere, we’re not sure exactly when that will be, but the place was built with a permanent stage, so it remains part of what we’ll be able to do again,” Lane said.

Asian American leaders call for an end to hate