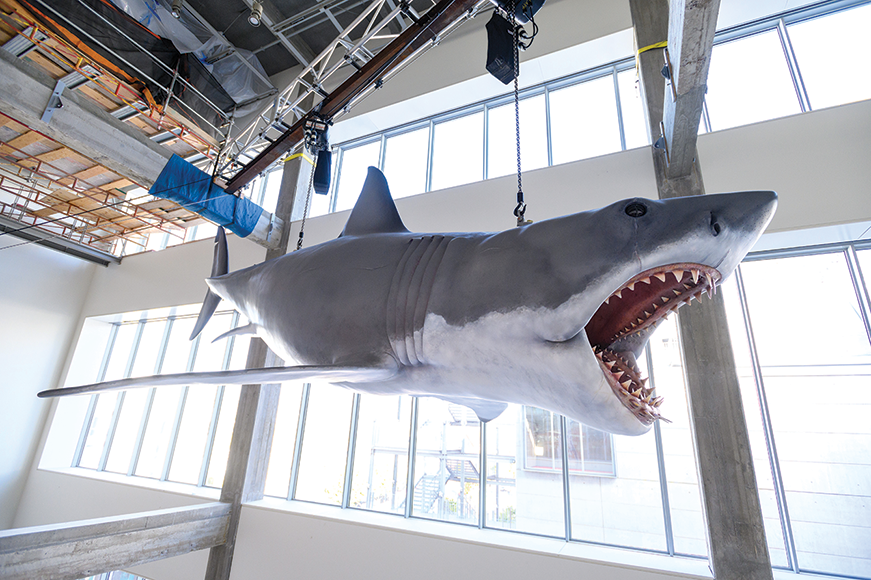 Bruce, one of the sharks from “Jaws,” is the biggest object in the Academy Museum’s collection. (photo by Todd Wawrychuk/©Academy Museum Foundation)

The Academy Museum of Motion Pictures is coming into focus as the curtain rises for its Sept. 30 opening date.

On March 10, the museum hosted a virtual presentation to provide a glimpse into plans for the initial exhibitions, which include films as a whole and their components, such as costumes, sound design, sets, props and the people who make movies. In addition to two theaters where films can be shown – the 1,000-seat David Geffen Theater and the 288-seat Ted Mann Theater – the 300,000-square-foot museum will cover multiple genres and filmmaking types, from blockbusters to animated classics and documentaries.

“The Academy Museum of Motion Pictures is set to be the world’s premier museum dedicated to the art and science of movies,” said Academy Award-winning actress and museum trustee Laura Dern, who hosted much of the presentation.

The museum building was designed by Pritzker Prize-winning architect Renzo Piano, and the exhibit spaces were done by Culver City-based wHY Architecture. During the presentation, wHY founding partner and Creative Director Kulapat Yantrasast highlighted the ability for visitors to travel through the exhibits at their own pace and seek out what they find most interesting while also learning more about aspects of films and filmmaking they may not have focused on before visiting the museum.

“There are moments of surprise and discovery throughout,” Yantrasast said.

The Academy Museum also plans to allow visitors to experience for themselves some of the magic of being in the film industry, Dern said. A portion of the museum will be devoted to the Academy Awards, which will include 20 authentic Oscar statuettes, including one won by filmmaker Barry Jenkins for “Moonlight,” and visitors will be able to use “augmented reality to illustrate … the experience of walking onto the Dolby stage and accepting an Oscar,” Dern said. 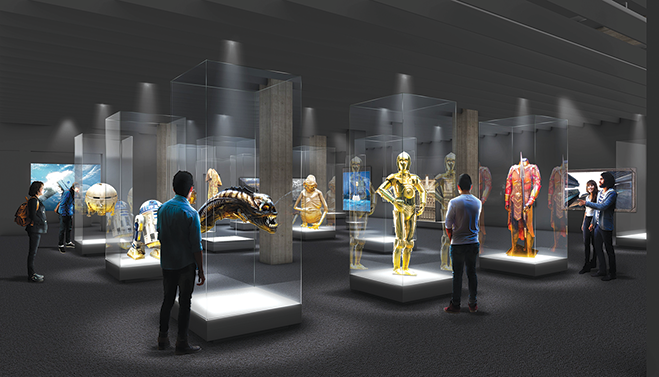 The Encounters Gallery at the Academy Museum features well-known costumes and props from blockbuster films from Marvel and “Star Wars.” (rendering by wHY Architecture/©Academy Museum Foundation)

The exhibit will also explore troublesome parts of the Academy Awards, including the 2015 #OscarsSoWhite controversy and the treatment of Hattie McDaniel, who won Best Supporting Actress for “Gone with the Wind” in 1940 but was forced to sit at a segregated table at the ceremony and was denied entry to the afterparty at an all-white club.

“We will not shy away from problematic histories,” Dern said.

That attitude of confronting past injustices will extend to the rest of the museum as well, such as the hair and makeup portion exploring the role makeup played in reinforcing negative stereotypes.

The museum also will seek to uplift diverse voices, including those who have found success in the film industry. Some of the previously announced exhibits include a look at Japanese filmmaker Hayao Miyazaki, known for animated works like “Spirited Away” and “My Neighbor Totoro,” which will be followed by “Regeneration: Black Cinema 1900-1970.”

“These are the spaces the Academy has long dreamed of, the spaces that will tell the diverse and powerful stories of cinema,” Dern said.

Other exhibits focus on individual filmmakers in concert with the artists, such as Spike Lee, who donated items from his museum-like office.

“My collection is a sneak peek into my loves, my influences, and it’s for the whole world to see. It’s got to go to a museum,” Lee said.

At the end of their museum excursion, guests will be presented with a vision of the future of film from some of the most prominent voices in modern cinema, Dern said.

“Visitors will leave with a sense of where leading filmmakers think cinema is headed,” Dern said.

This year’s Oscars will be held on April 25, and between April and the September opening, the museum plans to host discussions and educational events for the public, many of which will focus on gender, race, sexuality and other aspects that have contributed to inequality in the film industry.