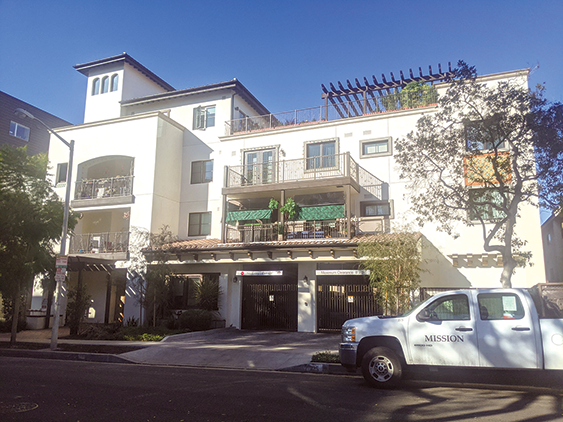 Blue Hibiscus, which has 22 units, is a low- and very low-income special needs housing complex that opened in West Hollywood in 2018. (photo by Justin Sayers)

The vote at the Feb. 16 meeting came after the California State Legislature adopted a pair of bills in 2020 – Assembly Bills 1763 and 2345 – in addition to Senate Bill 330 in 2019 that have impacted local housing regulations around the state.

West Hollywood’s move was “in direct response to state law,” according to Rachel Dimond, senior land use planner for the city.

“Anything that is required by state law, no matter what changes we make on our end, are in effect in our city,” she said.

As part of the changes, there are now new regulations on 100% affordable housing projects; amendments to density bonus regulations, including parking requirements; thresholds for concessions, or things developers can ask for to make their project viable, like reduced parking; and the percentage of density bonus allowed (going to 50% maximum).

The staff also recommended modifying their incentive threshold so that moderate units are afforded the same threshold change to qualify for concessions.

The regulations allow for 100% affordable housing projects – where all units, except manager units, are designated as low income, with up to 20% as moderate – to have no cap on the number of units, four concessions plus a three-story height concession and no required parking.

That ultimately means that housing developers in West Hollywood will be able to build approximately 15% more units – but they won’t necessarily be taller, just larger, according to staff.

The move also eliminated parking requirements, but City Council members, including Councilman John D’Amico and Councilwoman Lauren Meister, pushed to make sure that the applications on projects ask how many spaces are planned and how they came up with that number. That would mitigate the impact to and concerns of surrounding neighborhoods.

“I think that will help with transparency,” Meister said.

“This is going to help our city in many, many ways,” she said, adding that affordable housing development is part of a larger goal that fits with other programs, like a push to bring Metro rail through West Hollywood. “I think it’s going to give us opportunities in the future to be creative.”