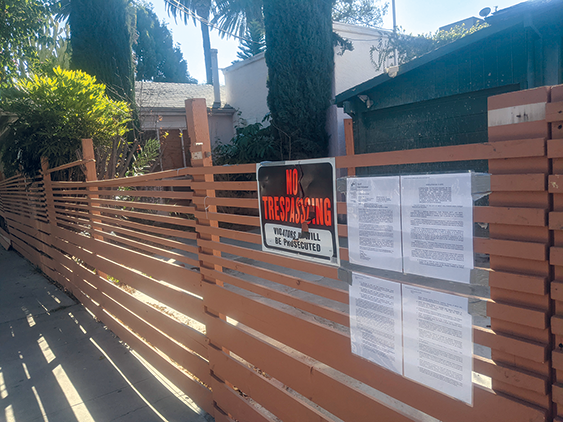 The home at 739 Westbourne Drive was declared a public nuisance by the West Hollywood City Council on Feb. 16. (photo by Justin Sayers)

The West Hollywood Council has declared a home a public nuisance after neighbors and city staff expressed frustration over the residence attracting squatters and the owner ignoring multiple citations to bring the home up to municipal code.

The unanimous vote during the Feb. 16 council meeting instructs city staff to order the owner of the 6,172-square-foot quadruplex at 739 Westbourne Drive to abate the nuisances or potentially face additional consequences, including a tax lien and potential foreclosure.

The homeowner has refused to comply with fixing multiple code violations found during a half-dozen site visits over the last year – and additional police and fire calls for service that have resulted in two arrests and a fire being put out at the property, all since Dec. 2020, according to documents provided by city staff.

“We don’t want people to move out of the city because a negligent property owner won’t follow the law,” Councilman John Erickson said.

The vote came after a public hearing, during which roughly a dozen neighbors expressed frustration about the property since it was purchased six years ago. They detailed seeing transients breaking into and entering the home, using drugs and starting fires.

“I know in hearing the frustration that was expressed tonight, our city is doing everything we can legally as quickly as we can,” Mayor Lindsey Horvath said.

The home is owned by SEJ Properties, and its managing member is listed as Elias Shokrian. He did not attend the public hearing, despite a notice being placed on the property, as well as first class and certified mail being sent to his address, according to Danny Rivas, the city’s code compliance manager.

“We’ve done everything we could to inform the property owner of this hearing,” he said.

A receptionist at Shokrian’s office said he was busy and would call back, however, he did not return the call or respond to a request for comment.

The city’s attempts to deal with the home date back to September 2020, when staff sent a letter to Shokrian notifying him of a new city vacant property ordinance, which went into effect in Jan. 2020, according to the city documents.

Representative’s from the West Hollywood Code Compliance Office and West Hollywood Sheriff’s Station conducted an initial site visit the next month and issued 11 violations. Additional follow-up site visits were conducted through January, with more violations found. The owner did not fix the issues, according to city documents.

During the Oct. 28, 2020, site visit, Shokrian was present at the property. City and sheriff’s staff attempted to educate him about the new vacant property ordinance and other nuisance conditions, but he was not cooperative, became verbally belligerent with staff and left the inspection stating “he would repair the property on his terms and not the city’s,” according to the documents.

At least a dozen calls for service were made to the property over the last 12 months, including for a fire that was extinguished at the site by the West Hollywood Fire Department in December. Code compliance officers also found clothes and food debris in the home when conducting an evaluation, according to documents.

A notice to abate was issued in January, scheduling the public hearing during the Feb. 16 meeting. Pursuant to West Hollywood code, “any condition caused or permitted to exist in violation of any of the provisions of this code shall be deemed a public nuisance and may be summarily abated as such, and every day such condition continues shall be regarded as a new and separate offense.”

A nuisance is defined as “anything which is injurious to health or safety, or is indecent or offensive to the senses, or an obstruction to the free use of property or injurious to the stability of real property so as to interfere with the comfortable enjoyment of life or property and affects at the same time an entire community or neighborhood, or any considerable number of persons, although the extent of the annoyance or damage inflicted upon individuals may be unequal,” according to the city’s code.

The council’s vote additionally appropriated $150,000 to clean up the site – while also ordering staff to attempt to recoup that amount. That total includes estimated costs to improve the structures, landscaping and hazardous waste removal, as well as on-site security at the property.

“I walk that neighborhood all the time and it’s really a horrible situation,” said Mayor Pro Tempore Lauren Meister.

She asked if there is anything more they can do about the property. City officials said there are further steps that can be taken, should they be necessary, including placing a lien on the property or administering a tax assessment – and foreclosing on the property should those go unpaid.

“This is the first step in pursuing any remedies against the property,” Assistant City Attorney Lauren Langer said.