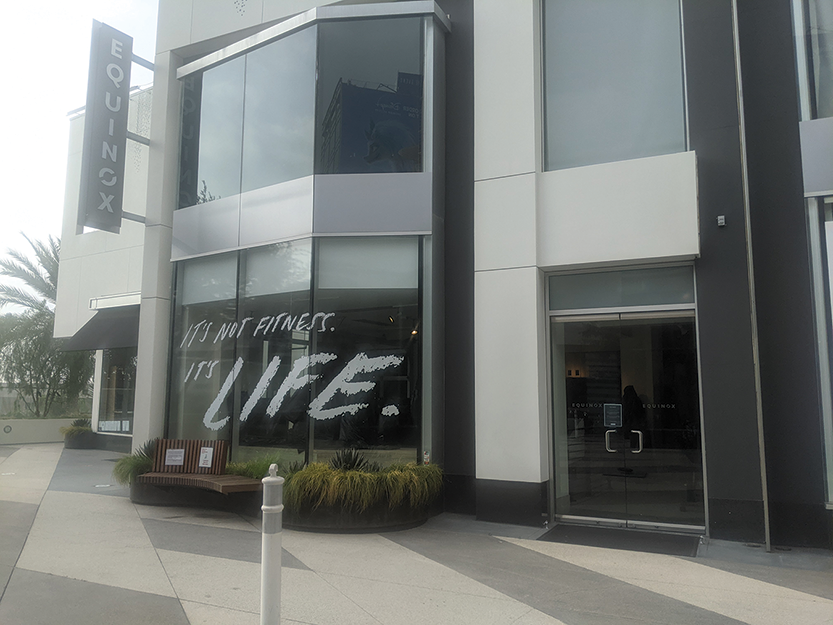 West Hollywood gyms, which have been closed for months, are now able to open outdoors. (photo by Justin Sayers)

The West Hollywood Council unanimously voted Feb. 1 to allow outdoor gyms, fitness facilities and private training facilities to expand their business to non-adjacent property in an effort to help an industry hit hard by the pandemic find ways to operate.

Gyms and other fitness establishments were recently given the go-ahead by the Los Angeles County Department of Public Health to operate outdoors with certain stipulations after the businesses had been forced to close for months to slow the spread of the coronavirus.

While some gyms in West Hollywood have moved onto their property outdoors, not every business has such space available. For those businesses without an outdoor area of their own, the council’s vote created a temporary use permit for gyms and other personal training facilities to expand their businesses to private spaces that are not directly adjacent to their current businesses.

Tara Worden, the city’s business development analyst, said the permits will only be issued to existing licensed businesses and that permits will be evaluated on an individual basis. The permits allow the businesses to expand their operations to vacant property, including parking lots and parking structures, with the written consent of the owner.

“We know from the interest in the business community that it is going to be used on a very limited basis,” Worden said during the council meeting.

As of Wednesday, no gyms had officially applied for the permit, although the city was initially approached by several gyms and staff is working with applicants on their submittals, she said.

Despite the limited use, multiple members expressed some concern about the permits, including the potential for a lack of mask compliance, but also the possibility of loud noise emanating from the outdoor gyms during early morning hours.

“I like Rihanna but I don’t want to be woken up at 6 a.m. by Rihanna playing music, personally, when I’m trying to work from home and do all that stuff,” Councilman John Erickson said. “I am concerned about the noise impact as we move the businesses temporarily onto properties that are closer to multi-family units. We’re all going to get those emails.”

Councilwoman Sepi Shyne said she’s also heard from members of the public regarding concerns about noise.

“People who are working out can listen to music in their ears – that would be more helpful to our residents,” she said.

John Keho, director of the city of West Hollywood’s Planning and Development Services Department, said that outdoor amplification from the gyms can be regulated – similar to what the city did with restaurants issuing permits for outdoor dining.

The gym temporary use permits allow businesses to operate outdoors from 6 a.m. to 10 p.m., although they limit audible noise between the hours of 6 and 9 a.m.

“It wouldn’t stop noises from people working out, but at least it wouldn’t be throbbing music,” Keho said, adding that the permits can be revoked within 24 hours due to noncompliance.