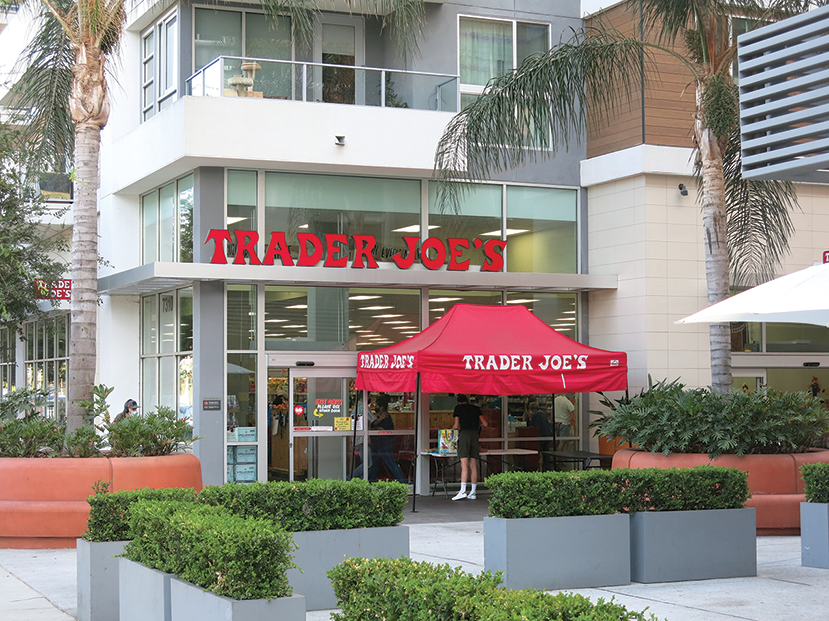 Trader Joe’s was praised by the West Hollywood City Council for offering its employees hazard pay before the city passed its ordinance. (photo by Cameron Kiszla)

In a unanimous vote on Feb. 16, the West Hollywood City Council moved forward with a requirement that the city’s grocery stores pay their employees an additional $5 per hour.

The regulation will remain in place for 120 days and will apply to stores that rely on retailing food products for at least 70% of their business.

The council members said the move was intended to help essential workers that have faced a higher risk than most by continuing to work in-person and deal face-to-face with the public during the pandemic.

“This is about [rewarding] people who have helped us stay the course, stay alive and stay cared for during this very difficult time,” Mayor Lindsey Horvath said.

The move faced opposition from the West Hollywood Chamber of Commerce, whose President and CEO Genevieve Morrill disputed the assertion by many of the supporters of the hazard pay ordinance that the issue is tied to social justice. Morrill added that she believes that employers will have to find ways to save money to afford the pay increases, which in turn might lead to negative outcomes for customers and the workers this ordinance is intended to help.

“This is not social justice. This hurts people. This impacts workers, benefits and hours, increases prices [and leads to] less profitable businesses and unintended consequences … This is government overreach … When costs go up, so do prices, and businesses have to address this with removal of benefits and layoffs,” Morrill said.

Councilmembers John Erickson and Sepi Shyne asserted that the issue is directly related to social justice, as many of the workers are people of color, who have been disproportionately impacted by COVID-19.

“Right now, in the middle of a pandemic, I can’t think of a more hazardous place to be than in a grocery store … This really is a social justice issue. It’s about, how do we compensate workers who really are putting themselves in hazard’s way,” Shyne said.

With the initial hazard pay regulation in place, the council agreed to return to the issue at the next meeting on March 1 so that some changes could be considered. For instance, council members wanted to provide carve outs for some businesses that have already allotted hazard pay to their employees. Shyne said Trader Joe’s already gives its employees an additional $4 per hour, and council members expressed support for requiring those businesses to only increase their pay by the difference between their existing hazard pay and $5 per hour.

“I think if Trader Joe’s is already doing that, they should be rewarded for doing it,” Mayor Pro Tempore Lauren Meister said. “We should be incentivizing businesses to do this, rather than disincentivizing them.”

Council members also asked to add other businesses and large retailers, such as Target, pharmacies and Best Buy, to the list for hazard pay, as they do not fit the definition of a grocery store but still continue to have their employees report to work in person and interact with customers.

Erickson requested those companies to be included as of Feb. 16.

“I think this is a time to be bold, to be brave … Let’s move forward and stand with our workers today,” Erickson said.

Assistant City Attorney Lauren Langer, however, expressed concerns that changing the ordinance during the meeting might lead to mistakes, and she wanted to be sure the ordinance was written correctly. A majority of the council agreed to delay that discussion for two weeks.

“I would have trouble voting for something that our city attorney, in real time, told us poses a problem when there’s a real-time solution that’s two weeks away … We want to do this right. We don’t want to start a lawsuit, we just want to get pay to people as soon as we can,” Councilman John D’Amico said.

The city’s move, however, could face opposition. The California Grocers Association reportedly filed a federal lawsuit against the city in an attempt to block the pay increase. The industry group for grocery store has also reportedly filed suits against Long Beach and Montebello for similar ordinances.

“This extra pay mandate will have severe, unintended consequences on not only grocers, but on their workers and their customers,” said Ron Fong, California Grocers Association president and CEO, in a statement. “A $5 per hour extra pay mandate amounts to a 28% increase in labor costs. That’s huge. Grocers will not be able to absorb those costs and negative repercussions are unavoidable.”

As of Feb. 23, the city had not yet been served with the lawsuit, West Hollywood spokeswoman Sheri Lunn said in a statement.

“The city of West Hollywood recognizes that there are no work-at-home options for these essential workers and, due to the COVID-19 pandemic, workers in our city and in communities around the nation have had to face new job-related hazards,” the statement read. “The city of West Hollywood has a core value of respect and support for people, and establishing hazard pay for essential retail workers who are on the frontline of the COVID-19 pandemic is the right thing to do. This should be a priority not only in West Hollywood, but in communities around the country. While the city has not yet been served with any lawsuit and, accordingly, cannot comment specifically on that, the city is prepared to defend its decision to establish hazard pay for frontline workers in West Hollywood during this devastating pandemic.”

“Our grocery store workers continue to show up every day, serving customers and providing the essentials that residents across the city need to stay safer at home,” O’Farrell said. “Their greater risk of exposure to COVID-19 is by definition hazardous work and the money they earn should be commensurate with those risks associated on the job.”