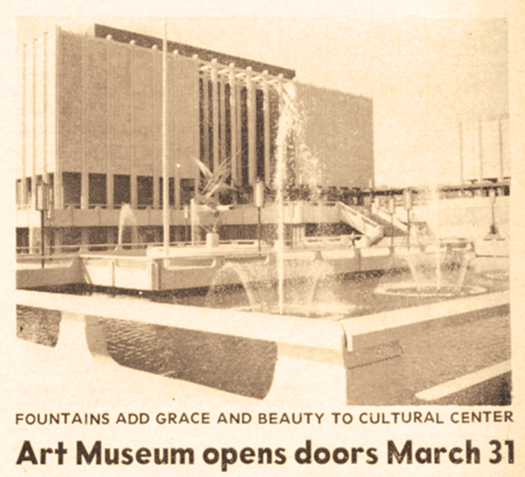 A photograph in the March 11, 1965, issue of the Park Labrea News announced the opening of the Los Angeles County Museum of Art. A plaza with fountains fronting Wilshire Boulevard and three new structures – the Ahmanson Building, Hammer Building and Bing Theater – had recently been completed and were scheduled to open in March that year. The museum cost $11.5 million and marked a new beginning for the world-class art institution, an accompanying article read. The museum had initially been part of the Los Angeles Museum of History, Science and Art in Exposition Park, but was expanded as a singular institution in the Miracle Mile. Many expansions have taken place since on the LACMA campus, including one that is presently ongoing that will replace the original buildings with a singular sweeping structure spanning Wilshire Boulevard. Known as the David Geffen Galleries, construction is anticipated to be complete by the end of 2023 and the building open to the public in 2024.