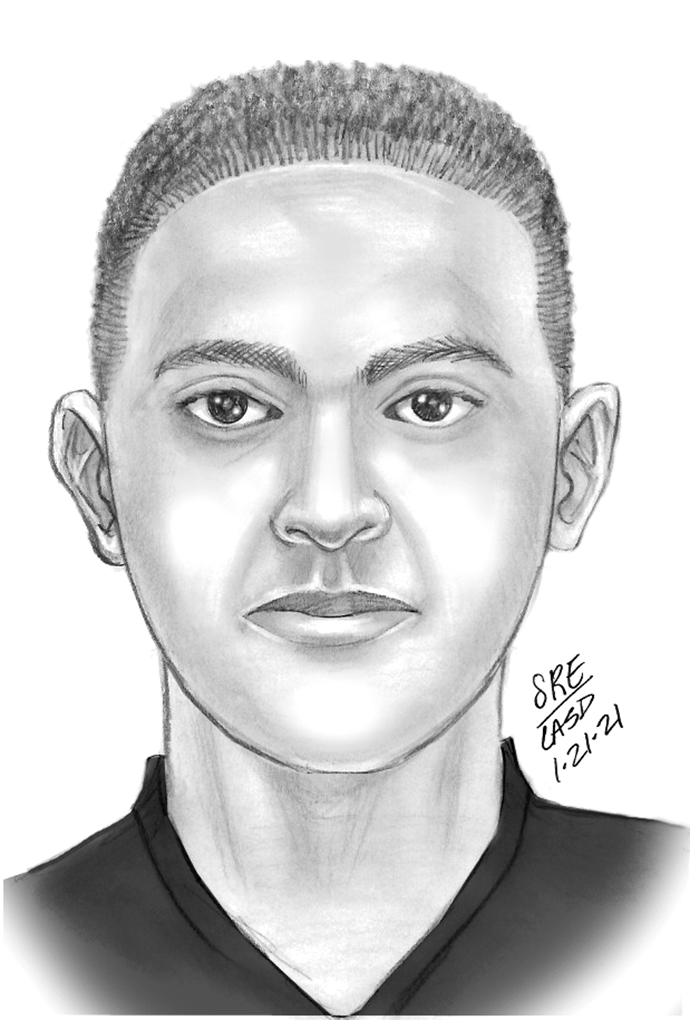 Detectives hope a police sketch will lead to the suspect who allegedly sexually assaulted a woman in West Hollywood. (photo courtesy of the LASD)

Los Angeles County Sheriff’s Department authorities have released a police sketch of the suspect who allegedly sexually assaulted a female victim on Jan. 20 in the 8400 block of Fountain Avenue in West Hollywood.

The man is described as being white or Hispanic, in his early 30s, approximately 5 feet 7 inches to 5 feet 11 inches tall with a light complexion, short black hair and brown eyes. He possibly had a tattoo on his right arm and was last seen wearing a black T-shirt and dark blue jeans, authorities said.

No other sexual assaults or similar violent crimes have occurred in the area, leading investigators to surmise it may have been an isolated incident or crime of opportunity, said Lt. John Adams, with the sheriff’s department’s Special Victims Unit.

“It’s still an active case,” he added. “There’s no indication it wasn’t [an isolated incident]. There haven’t been any other cases like that. So far, we don’t have any evidence the victim knew the suspect. There is no reason not to believe it was an opportunistic crime.”

The incident allegedly occurred between 11 p.m. on Jan. 20 and midnight on Jan. 21. The suspect entered an apartment through a patio sliding door and confronted a female occupant, investigators said. The suspect allegedly grabbed the victim by the neck and shoulders and forced her on to a couch in the living room, where the sexual assault took place. The victim struck the assailant and was able to break free, at which time the suspect fled the apartment.

The assailant was seen riding a black hybrid-style bicycle, which is a cross between a mountain bike and road bike. The bicycle had medium-sized tires, authorities said.

Detectives are asking anyone who may have witnessed suspicious activity in the area around the time of the alleged crime to call them. They are also hoping the sketch will lead to tips.

“Certainly, if somebody says, ‘Hey, that looks like my neighbor’ or recognizes him, we would like to talk to them,” Adams added.