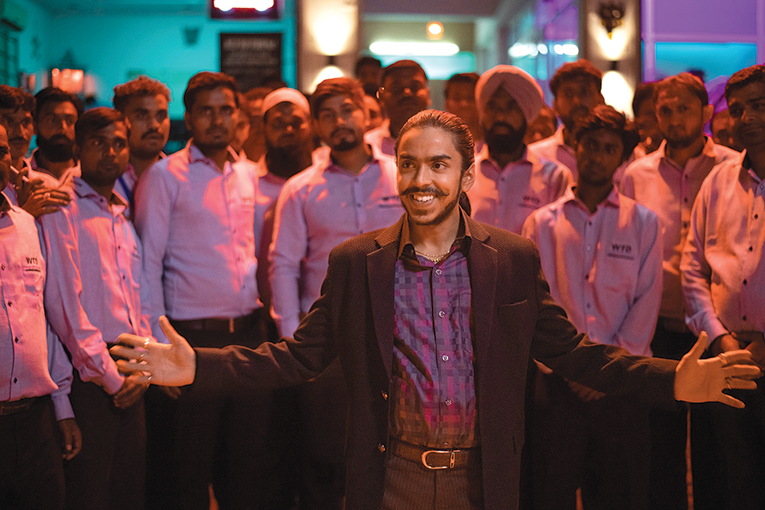 Adarsh Gourav stars as Balram Halwai in “The White Tiger,” a film exploring the complexities of life and economic status in India. (photo courtesy of Netflix)

Classism in India often graces the big screen, but few films do so with the style and tonal diversity of Netflix’s “The White Tiger.” What begins as a gripping exploration of castes and scheming melts into a devastating tale that fractures the big lie of individualism.

Balram Halwai (Adarsh Gourav) no longer answers to any other masters. He once did, but found a way out of an undesirable caste when he resided in Laxmangarh in the Rajasthan state of India. As a child, he showed promise in school, but dreams of ascending on merit were snuffed out when his grandmother forced him to permanently shelve academics and work.

Much older, Balram concocts a new scheme, never content to marry and remain closely tied to his poor family. He aggressively vies for a job chauffeuring around the family of The Stork (Mahesh Manjrekar). He’s a crime lord who pays off the Great Socialist (Swaroop Sampat), a seemingly heroic political figure, to avoid paying taxes, and easily snuffs out not only any servants who wrong him but their entire family as well. 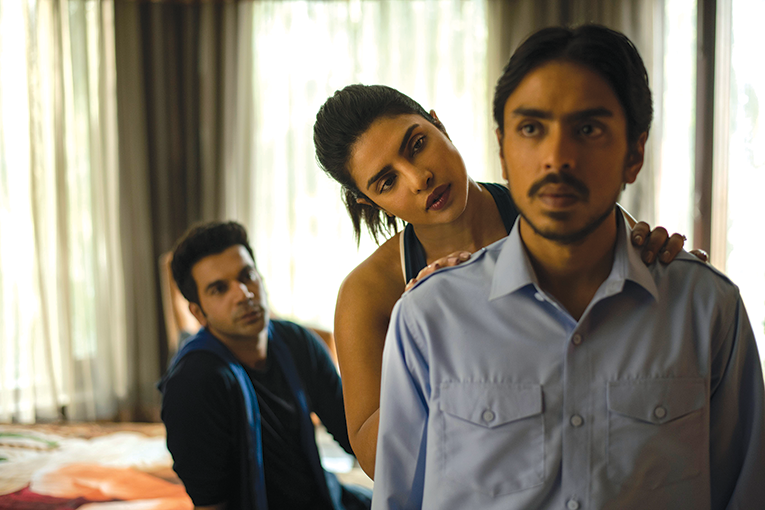 Rajkummar Rao, Priyanka Chopra and Adarsh Gourav give compelling performance in “The White Tiger,” which will likely be considered one of the year’s best films. (photo courtesy of Netflix)

Ashok and Pinky feel all too familiar. Consider American counterparts in “Get Out”: white (alleged) progressives who vote the right way while they fetishistically feed on people of color. But when things go wrong for the young couple, they can always fall back on that wretched caste system to protect them.

The first half of “The White Tiger” presents as a conniving figure, an ungrateful grandson who craves what he doesn’t have, ignoring those he should cherish, replacing them with this new family. Alas, the master-servant relationship is not family, he learns, no matter how much the rich might boast to the contrary for their own ends.

“In the old days there were 1,000 castes and destinies in India,” Balram says in a narration that texturizes the entire film. “These days, there are just two castes: men with big bellies and men with small bellies. And only two destinies: eat or get eaten up.”

These words coax Balram’s actions in the second half of the film. The opening scene hints at something horrific to come. And when it does, the near-heist tone transitions. Any air of dark comedy morphs into utter tragedy.

But that turn doesn’t ruin anything; it’s the natural outcome in a story honest about the myth of the self-made entrepreneur. Balram first appears as such a savvy businessman, but his success (no spoilers here) hails not from a single moment of original thought.

Come the final moments of the film, the free market bares its teeth, exposing what loyalty to it requires. Again, Ashok and Pinky’s liberalism serves an important point here. They land across the world with fresh ideas from a country whose capitalist system has been called “morally superior” to others the world over.

If only they can influence things in India for the better. Bold reforms stemming from corruption – a bitter meal indeed. That’s also a rather universal theme that speaks to the 1% demanding good P.R. for charitable giving while tax cuts and evasive tax loopholes provide them so much more and everyone else that much less.

Balram never enjoys the role of empathic protagonist. Always antagonistic, he cares little for others beyond how they can help him succeed, with one exception. “The White Tiger” effectively presents a character both powerful and powerless once the credits roll. He’s never a cypher, some empty stand-in for broader themes, but he can’t escape systemic woes that permanently affect those close and far from him.

Gourav sports an incredible performance both on-screen and as narrator, though the latter point also owes much to director-screenwriter Ramin Bahrani’s brilliant adaptation of the 2008 novel by Aravind Adiga.

“The White Tiger” will likely go down as one of 2021’s best films. But its violent, grim and honest display of economic disparity remains timeless.