Take a weekend stroll on Robertson 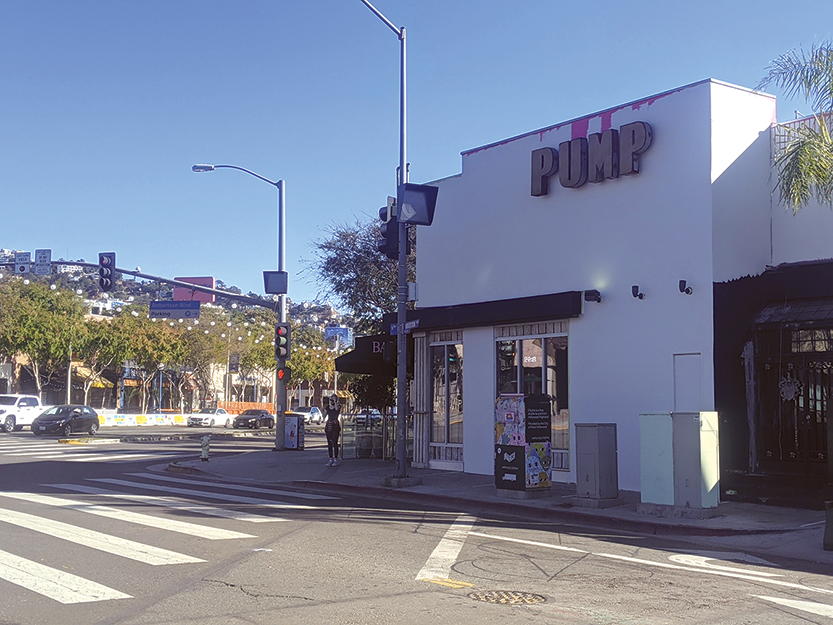 This stretch of North Robertson Boulevard will be pedestrian-only on weekends by the spring. (photo by Justin Sayers)

The West Hollywood Council unanimously voted to move forward with a plan to turn a popular stretch for dining and nightlife into a pedestrian-only area on the weekends.

City staff will reach out to businesses and adjacent neighborhoods to alleviate any remaining concerns, including parking, traffic and patron access, before implementing the pilot project. There is no start date for the closure, although officials said they’re targeting the spring, and more specifically, mid-April. They’ll return to council three months after it starts to reassess the program.

Councilman John D’Amico, who initiated the proposal alongside Councilman John Erickson, had proposed a similar pedestrian-only plan for the road back in 2012, but it failed after pushback from businesses and the previous council.

After the vote, which came just after midnight on Wednesday, D’Amico joked that he could resign.

“It’s all I ever wanted to do – was to close Robertson Boulevard,” he said.

In an interview, D’Amico said his onus for reintroducing the proposal was the pandemic, as closures have ravaged small businesses and led to isolation among the physically distancing public. He’s hoping the pedestrian-only area serves as “a way to turn over public space to the public.”

D’Amico said he envisions the closure eventually activating the area for pedestrians and bicyclists, expanding outdoor dining opportunities and inspiring community events, everything from morning yoga classes to local restaurant and retail pop-ups.

“We’re looking for new ways to provide public space for our local small businesses to expand, or to get back into the business of doing our work,” he said. “We thought this was the perfect public ground to turn over to businesses and to visitors alike to expand our local business opportunities.”

For Erickson, who said that business revitalization and bringing people back to the community safely were part of his successful 2020 campaign, said in an interview he’s confident that the increased pedestrian traffic will have a positive impact on businesses. But it will ultimately promote safety in one of the most popular areas of West Hollywood.

“Speaking as a person in the community, I cannot tell you the amount of times that I’ve almost been struck by a car on Robertson Boulevard on Friday, Saturday or even Sunday during the day,” he said.

City staff estimated that they’ll have to pay between $25,000 and $60,000 for sidewalk repair and paving to ensure pedestrian safety, and about $5,500 in new signage installation. The monthly cost of street closure and street cleaning for the area is estimated at $2,200 per month. 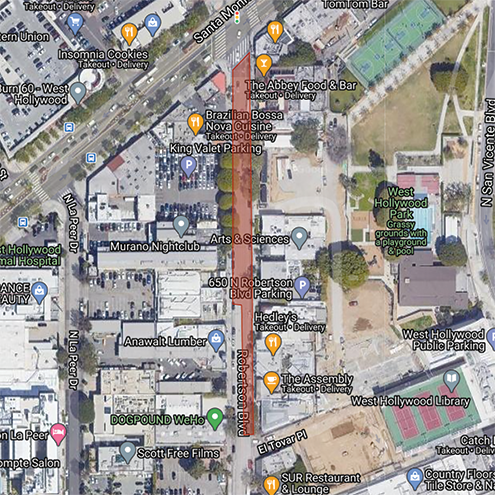 The highlighted area shows the stretch of North Robertson Boulevard that will be closed to cars from 6 p.m. on Saturday to 2 a.m. on Monday. (illustration by Justin Sayers using Google Maps)

The plan was met with some push-back from adjacent neighborhood residents and businesses, including the redirection of traffic into adjacent neighborhoods, potential travel and public safety delays, limited access to some retail stores and the implementation of a pilot program during a time that is not reflective of normal conditions.

As it was approved, the southbound lane will be closed from Santa Monica Boulevard to the driveway at Anawalt Lumber, while the northbound lane closure would extend to El Tovar Place. That would allow access to some businesses and space for cars to turn around safely. The plan also includes a drop-off area for ride-hailing vehicles and taxis. It also would coincide with the opening of more parking options near the area, which are currently under construction.

The other members of the council, Mayor Lindsey Horvath and Councilwomen Sepi Shyne and Lauren Meister, said during the meeting that they hope the city meets with concerned residents before implementation, while also starting the pilot project small, for instance by making the area an Outdoor Use Temporary Zones for existing businesses.

“I think that if it can’t work in these constrained conditions, that it’s definitely not going to work during everyday full-blown life,” Horvath said.

D’Amico said that while the feedback he personally received was overwhelmingly positive, he’s hoping the public benefit outweighs the concerns that some residents have.

“I don’t prefer to be inconvenienced when Halloween happens or Gay Pride happens or the L.A. Marathon happens and streets are closed. But I also know that joining in and being part of the community and celebrating is a much more generous way to think about how to use our public space,” D’Amico said.

Erickson added that he hopes the program is the start of a conversation on how the city should prioritize people over vehicles.

“It’s time to start thinking about larger infrastructure improvements and bring back our community and promote local businesses and feel safe and secure in one of our most popular areas of West Hollywood,” he said.