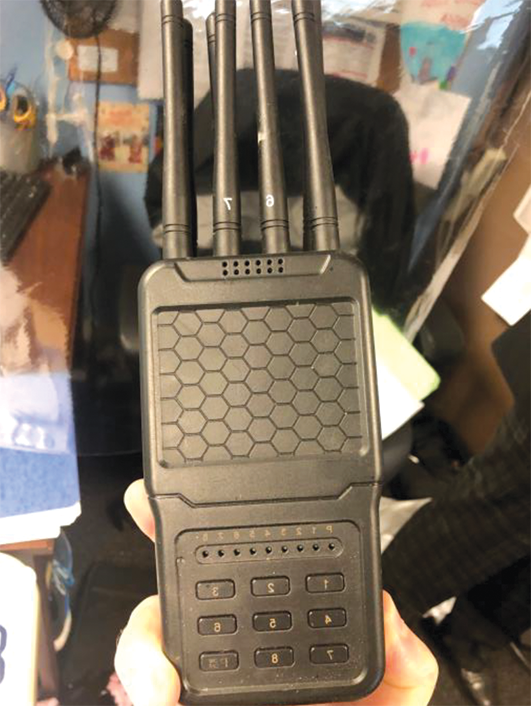 Officers allegedly found an electronic device used by car dealerships to bypass security codes and open car doors when they searched the residence. (photo courtesy of the LAPD)

Authorities arrested two men on Jan. 12 for allegedly operating a high-tech auto theft operation out of a short-term rental property in the 100 block of South Gardner Street, police said.

The arrests came after a Mercedes-Benz equipped with an anti-theft device was stolen earlier that day in West Hollywood, and police located the vehicle parked on Gardner Street. Officers used a ruse to get the suspects to come out of a house and then arrested them when they determined the two men were tied to the stolen vehicle. Officers then conducted a “protective sweep” for safety and found other stolen cars and equipment allegedly used in auto thefts, said Capt. Shannon Paulson, commanding officer of the Los Angeles Police Department’s Wilshire Division.

“They made sure there were no other suspects present, but in doing that, you can’t help but see certain things in plain sight,” Paulson said. “They made observations of things that the officers, through training and experience, knew indicated criminal activity.”

Paulson said the two men, both in their early 30s, were arrested and booked for felony auto theft. They were not identified, but she said both have extensive criminal histories, and one had been released days before for another auto theft arrest and was awaiting a court hearing.

“They were definitely organized,” Paulson said. “We believe they were involved in a larger operation.”

Paulson said officers found evidence including an electronic device used by car dealerships that bypasses codes and can open car doors automatically, as well as high-tech printers to make authentic-looking paper license plates like those issued by dealerships. When serving a search warrant, authorities allegedly found fake dealer plates from multiple states. At least one firearm and narcotics were also found in the residence.

Paulson said authorities believe the suspects were stealing luxury vehicles and sending them to Nevada. She confirmed it was a short-term rental but did not have information about the owner.

“We think they were hitting all over the west side,” Paulson added. “They were pretty technologically savvy. This crew was also active out of state, and were involved with criminal activity crossing state lines.”

Anyone with information about auto thefts in the Wilshire Division is urged to call detectives at (213)922-8205.