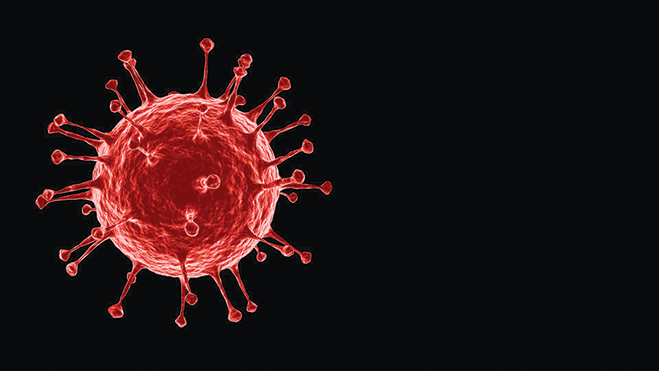 Travelers are carrying a new strain of the coronavirus from Southern California and spreading it to destinations around the globe. (illustration by Getty/courtesy of Cedars-Sinai)

A new strain of the coronavirus in Southern California, first reported in January by Cedars-Sinai, is rapidly spreading across the country and around the world as travelers apparently carry the virus with them to a growing list of global destinations, according to new research published on Feb. 11 in the peer-reviewed Journal of the American Medical Association.

The strain, known as CAL.20C, was first observed in July 2020 in a single Los Angeles County case, as Cedars-Sinai earlier reported. It reemerged in October in Southern California and then quickly began spreading in November and December, corresponding with a regional surge in coronavirus cases during the holidays.

The strain now accounts for nearly half of current COVID-19 cases in Southern California – nearly double the percentage in the region compared to just a month ago, according to the Cedars-Sinai research.

While CAL.20C has expanded quickly through the local population, it also has spread to a total of 19 U.S. states plus Washington, D.C., and six foreign countries, the Cedars-Sinai investigators report. As of Jan. 22, CAL.20C had been detected in Alaska, Arizona, California, Connecticut, Georgia, Hawaii, Maryland, Michigan, New Mexico, Nevada, New York, Oregon, Rhode Island, South Carolina, Texas, Utah, Washington, Wisconsin, Wyoming and in Washington, D.C. Abroad, it was found in Australia, Denmark, Israel, New Zealand, Singapore and the United Kingdom.

Travelers from Southern California appear to be carrying CAL.20C to other states and parts of the world, according to the JAMA study’s co-senior author, Jasmine Plummer, a research scientist at the Cedars-Sinai Center for Bioinformatics and Functional Genomics and associate director of the Applied Genomics, Computation & Translational Core at Cedars-Sinai.

“CAL.20C is moving, and we think it is Californians who are moving it,” Plummer said.

Los Angeles International Airport has long been among the busiest travel hubs in the U.S., ranking No. 2 in total passengers boarded in 2019, according to the U.S. Department of Transportation. While air traffic across the U.S. has plummeted in the last year during the pandemic, about 2 million domestic and international passengers still traveled through LAX each month in November and December.

Although the pace of new coronavirus cases has slowed recently, Los Angeles County remains one of the nation’s pandemic hotspots. Through Feb. 9, the county had reported more than 1 million COVID-19 cases and more than 18,000 deaths since the start of the pandemic.

Jones, Carrasco to be honored during inaugural NHMLAC event