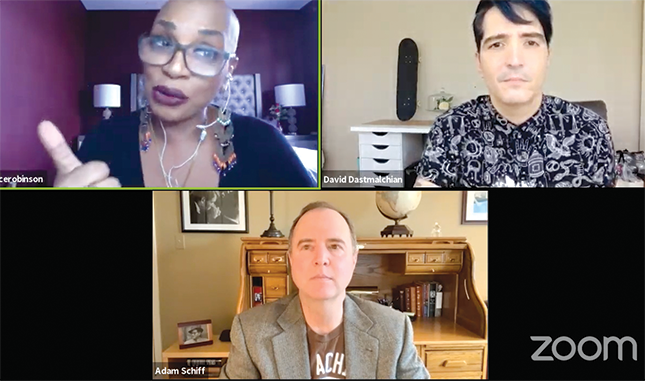 U.S. Rep. Adam Schiff (D-Burbank) joined a virtual forum held by the Future of Music Coalition on Feb. 22 to discuss relief for mixed earners – those with multiple sources of income – who he said have struggled disproportionately during the COVID-19 pandemic.

Many mixed earners are creative professionals including actors, musicians, artists, authors, screenwriters and cinematographers, as well as entertainment industry employees such as camera operators, sound engineers, video editors and others who are part of production. The group also includes freelancers as well as entrepreneurs, event planners, real estate agents, taxi and ride-hailing service drivers and people in numerous other industries. Many have multiple jobs and side gigs that bring in money, but that was before the pandemic, Schiff said.

Now, many have been out of work for months and did not qualify for unemployment or may have missed out on previous stimulus payments. In California, only those who once had steady jobs and paid taxes were eligible for unemployment, and those who had not paid taxes or were not on file were not issued federal stimulus checks during the initial Coronavirus Aid, Relief, and Economic Security Act. Schiff said he has been fighting for mixed earners and others left behind and is supporting a federal relief bill now making its way through Congress that will provide relief for millions of Americans.

Kyle Kaplan, a musician from Los Angeles who participated in the forum, said he only received $41 per week in unemployment insurance when he filed after the pandemic began, and that was only because he had once worked in a traditional job in a small part on the TV show “Hannah Montana.” He said it has been a struggle to get by, as he once earned a six-figure income as an independent musician.

“I still have bills and living expenses. It’s been a bit of a learning curve,” Kaplan said. “We are not asking for special treatment, we are asking for equal treatment.”

David Dastmalchian, an actor who moderated the forum, said up to 12 million mixed earners nationwide are facing struggles in obtaining relief. Workers in the film and television industries have been particularly hard hit, with approximately 400 productions being cancelled in 2020, he said.

Karen Castoldi, who once owned a company in Redlands specializing in acrobatic performances, said she lost her business and home due to a lack of income during the pandemic. Now homeless and staying with a friend, Castoldi said she hopes relief comes soon.

“I qualified for regular UI benefits because I used to be a stuntwoman. I qualified for $45 a week,” Castoldi said. “It’s a real struggle. I lost my house and everything.”

Schiff sympathized with Castoldi and the others and said he is optimistic more relief will come soon from the federal government. He anticipates that Congress will pass a new stimulus package in mid-March.

“It underscores why many of us feel there is such urgency to pass this relief package to, in addition to getting mixed earners covered, extend unemployment compensation, get direct checks issued to individuals, make sure we can get our schools reopened and our small business reopened,” Schiff said. “There are lots and lots of families hanging by a thread right now and lots of people who invested their money into their small business themselves, and all that hard work is at risk of being lost if they can’t get through the next few months.”