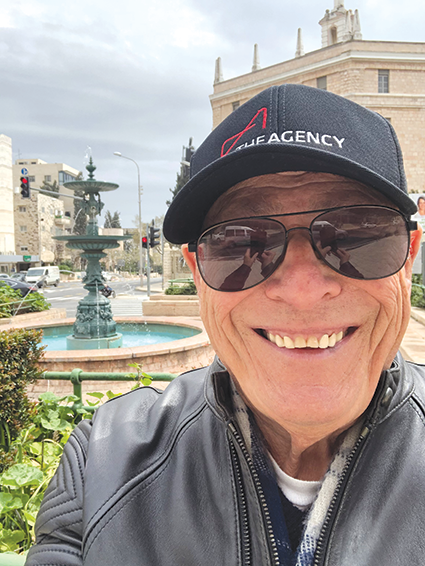 Morrie Flaster had an adventurous side, and he and his wife traveled extensively. (photo courtesy of Rosalie Klein)

Longtime local resident and well-known real estate agent Morrie Flaster died on Feb. 3 at the age of 76 after a battle with cancer.

Known as a consummate professional with a special affinity for building relationships with clients, Flaster worked in the real estate business for more than two decades with his wife, Rosalie Klein, to whom he was married for 25 years. Flaster is credited with coining the term Beverly Grove for the neighborhoods between the Beverly Center and The Grove – a common reference nowadays. Klein said Flaster never trademarked the name because he wanted everyone to use it.

“It’s the type of person he was. Morrie was very good at coming up with things like that and he wanted to share them with everyone,” Klein added. “Today, Beverly Grove is an area. He was never selfish and always cared about everybody.”

Flaster spent his early years in Pasadena but moved with his family as a teen to the Fairfax District and lived on Gardner Street. Klein said one of Flaster’s first jobs was selling commercial real estate, but a downturn in the market in the early 1990s prompted him to look for a different occupation. Flaster operated his own advertising agency until he met Klein on a blind date. After marrying in 1996, Flaster joined Klein in the real estate business and the pair began working together. She had previously worked for Fred Sands and was established in the local community.

“He was excited to get his license back, and we worked together for 23 years,” Klein said. “He was very good at what he did and worked very hard.”

Outside of his professional life, Flaster was an avid reader and history buff. He was also a dedicated skier and the pair took frequent trips to Mammoth and other alpine locations, Klein said. Flaster also went on a yearly deep sea fishing expedition and was known for filling the freezers of family and friends with freshly caught tuna. Klein said they loved to travel – something they did a lot of near the end of Flaster’s life.

“That last year (in 2019, before the pandemic), he was able to slow down and we shared some wonderful, wonderful trips,” Klein said. “We went to China and he climbed the Great Wall. We traveled all through Europe and he loved the art museums. We also took a cruise through the Panama Canal. He had always wanted to do that and it was an amazing trip.”

Klein said she is grateful for the time they spent together and the experiences they shared, and she remains deeply saddened by the loss. Klein and Flaster had no children. She encouraged anyone wishing to pay tribute to Flaster’s memory to donate to organizations fighting cancer such as the USC Norris Comprehensive Cancer Center and the American Cancer Society.