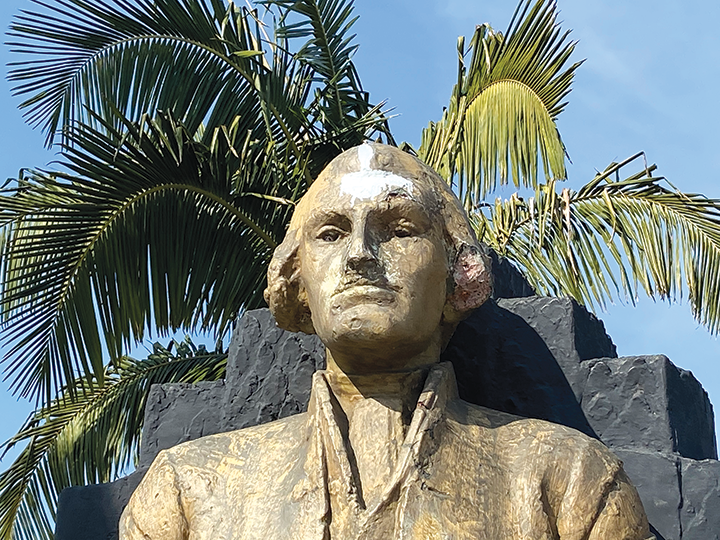 White paint can be seen on the forehead of a statue of Haym Salomon in Pan Pacific Park. (photo by Edwin Folven)A statue in the Fairfax District of Haym Salomon, a Jewish-American patriot of the Revolutionary War, has been defaced with white paint. The statue sits atop its perch at the corner of Third and Gardner streets on the edge of Pan Pacific Park.

How and when the paint was splashed on the statue’s forehead remains a mystery, and it apparently went unnoticed for a considerable amount of time.

The Los Angeles Police Department’s Wilshire Division did not receive any reports of vandalism and was unaware of the situation. After an inquiry earlier this week, officers conducted an investigation, spoke with security guards in the area and were unable to pin down what happened or when. Security guards told officers the statue had “been like that for some time,” said Capt. Shannon Paulson, commanding officer of the Wilshire Division.

The statue, installed in 2008, is located in a park overseen by the city of Los Angeles Department of Recreation and Parks. Inquiries to RAP, including whether there are plans to clean the statue, were not returned.

Salomon (1740-85) was an important figure in the American Revolution, helping to finance the war. A plaque at the site reads, ‘… this statue stands as a reminder of a Jewish American patriot’s invaluable service to his country in a time of great struggle.”

Although the statue has been at Pan Pacific Park since 2008, it was first dedicated in a park in Boyle Heights in 1944 and later moved to MacArthur Park and West Wilshire Park before being installed in its present location. Salomon, who was born in Poland and immigrated to the United States, is known for loaning money to many famous figures of the Revolutionary War era, including James Madison and Thomas Jefferson.

“It’s terrible. It should be cleaned up,” said Earl Roth, commander of the Jewish War Veterans of the United States’ Post 60. “It doesn’t come as a surprise though, because so many statues are being vandalized lately. The sad thing is he was so instrumental in financing the war and played such an important role for our country.”

Mat Millen, commander of the Jewish War Veterans of the United States’ Post 118, said he attended the 2008 dedication for the statue and was blunt about what he thinks should happen.

“I would hope that the Department of Recreation and Parks will work quickly to rectify the situation,” Millen said.

Los Angeles City Councilman Paul Koretz, 5th District, also expressed concern and added that he planned to have his public safety director consult with the LAPD about the situation.

Scott Epstein, chairman of the Mid City West Community Council, added that he was unaware of the paint on the statue but said he would share the information with fellow council members and planned to ask them to consider whether a community effort could be utilized to clean the statue.

“Maybe it’s something the council could get involved with as far as a cleanup,” Epstein said. “We have done many beautification efforts before. It’s something I will definitely look into.”

‘A Glitch in the Matrix’ wastes a promising premise