‘Orange’ you glad they are helping? 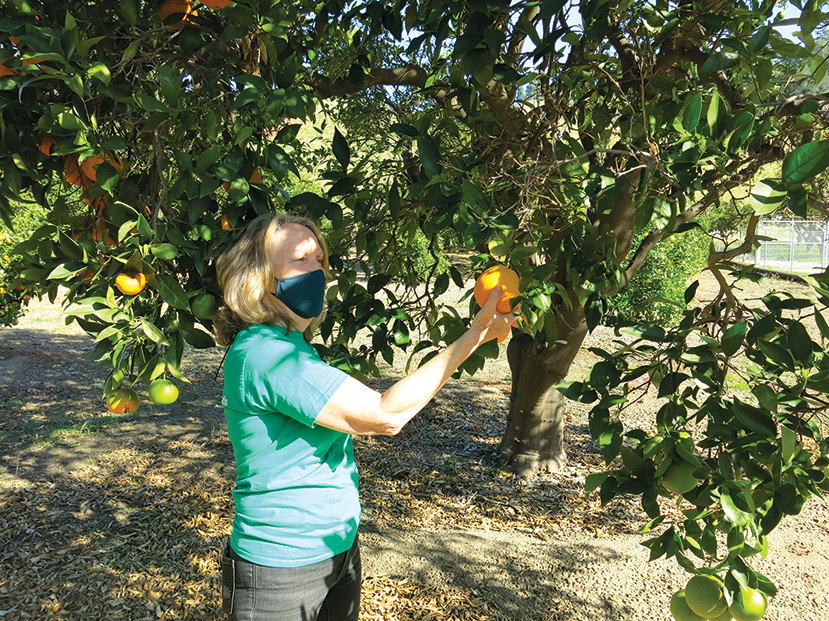 Southern Californians are likely aware to some degree that the second-largest metropolitan area in the United States was once a hub of agriculture. The area was long known for farming and ranching, but that is now often relegated to books and street names.

One 4.3-acre orange grove, however, still operates not far from the tourist attractions of West Hollywood and Beverly Hills.

The Franklin Canyon Orange Grove, located in the 90210 zip code just south of the similarly named reservoir and park and just a couple minutes’ drive from the bustling Sunset Strip, is a reminder of what Los Angeles County used to be, said Carolyn Ramsay, executive director of the Los Angeles Parks Foundation, which operates the Los Angeles Department of Water and Power-owned grove.

“The amazing thing about this parcel is that it ties us to Los Angeles’ past as the sort of breadbasket of the country, and it’s serving the current needs of our city,” Ramsay said.

The grove, which dates back to at least the 1950s, last year produced 70,000 servings of oranges – mostly navels, with some Valencias included as well – that are harvested and given to people in need.

Much of the harvesting is done by Food Forward, a nonprofit that specializes in urban gleaning.

“The missions complement each other really nicely,” Ramsay said. “We’re looking for a way to use the food, and Food Forward was there to step in and do it for us. The parks foundation felt from the outset that this produce had to go to feed hungry Angelenos.”

Samantha Teslik, Food Forward’s senior manager of backyard harvest, said the organization works “throughout L.A. and Ventura County [at] home residences, private orchards [and] parks like this one.”

“We’re 100% volunteer-powered and harvest fresh produce that would otherwise be wasted and redirect it to local hunger-relief agencies,” Teslik said.

The partnership between Food Forward and the Los Angeles Parks Foundation, which began in 2014, thrills the foundation, Ramsay said. She added that Food Forward makes “the experience really fun and mission-driven” for the volunteers. 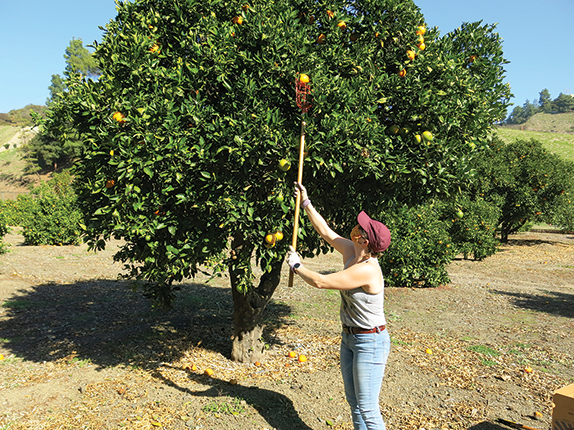 Volunteers like Kristen Egermeier used specialized tools to harvest oranges that would normally be out of reach. (photo by Cameron Kiszla)

“People have such [an] essential sense of joy to come out here and pick the fruit … It’s such a beautiful setting, you can hear the birds singing while you’re standing here,” Ramsay said. “And they have such a feeling of genuine impact on the world since the food is going directly to feed people who need it most. This is just a win-win-win-win-win-win-win.”

On the morning of Feb. 6, the Franklin Canyon volunteers were learning the ropes of fruit-picking, getting acquainted with the process of gathering oranges and practicing with their equipment.

Food Forward is looking for volunteers to pick fruit and those who own fruit trees. Teslik said that anyone with a fruit tree can register with Food Forward, which will either “send a volunteer out or give you the tips and tools to [pick] it yourself” so it can be donated.

“If you have 100 trees, if you have one tree, it all makes a difference,” Teslik said. “With the current pandemic, we’ve totally updated all of our protocols so that safety is No. 1. The demand from the pantries is higher than ever, so there really is the need to connect the surplus.”

Silver Lake resident and volunteer Kristen Egermeier grew up in Ventura County around agriculture and said she was happy to be helping others.

“Anything to help food justice in our city I think is really important. There are so many wonderful programs like this [that gather produce from] city-run orchards and private citizens. It’s really important that we take advantage of it, especially in Southern California, where you can grow pretty much anything,” Egermeier said.

Beverly Hills resident Allison Soled said volunteering with Food Forward is “a great opportunity to help people,” and the chance to get outdoors in such an idyllic setting didn’t hurt either.

“It’s a beautiful day with lots of fruit to pick,” Soled said.