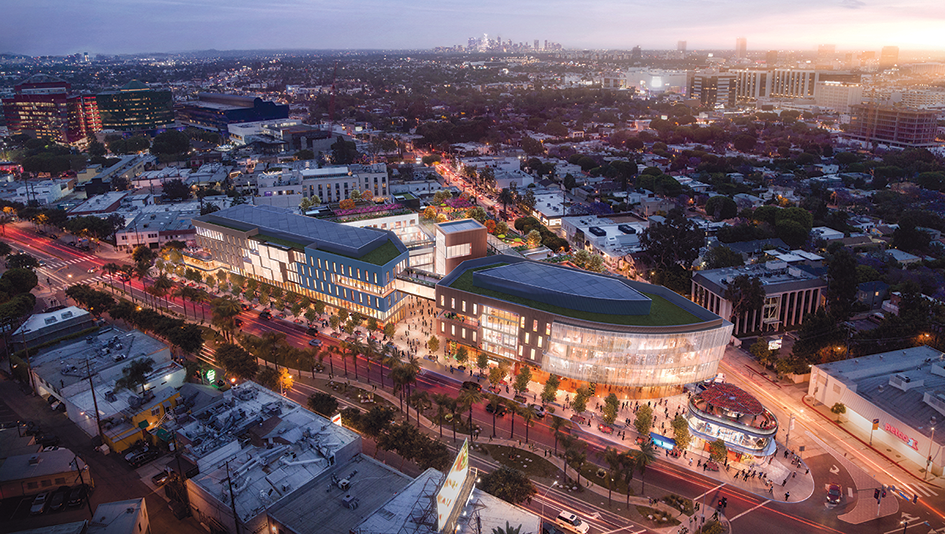 Developers expect the Melrose Triangle Project, which is centered around a courtyard, to become a destination. (photo courtesy of Gensler)

Developers behind the Melrose Triangle project met on Sunday, Feb. 21, with the West Hollywood West Neighborhood Association, seeking input on the long-awaited development, while also offering a sneak peak of the mixed-use project they hope will be a “destination” for the community.

The presentation detailed the updated plans for the 2.7-acre project that is bounded by Santa Monica Boulevard, Melrose Avenue and Almont Drive, after the Charles Company submitted its latest iteration of the five-story-maximum development late last year. They include increasing the amount of outdoor dining space and low-rise office space, increasing the number of on-site affordable housing units, and eliminating gallery and showroom space.

The biggest change is replacing a planned driveway off Santa Monica Boulevard with a courtyard that has pedestrian access from all three sides, a move developers said they’re hoping creates a respite for the public from the city streets, and offers opportunities for event space, outdoor seating and an enclosed public garden.

“What we’re really focused on is creating a really vibrant pedestrian-oriented project,” said Andy Cohen with Gensler, the project architect, who added that there will be a bike lane and ride-share pick-up and drop-off lanes immediately surrounding the project.

Those from the neighborhood association expressed some skepticism about the courtyard – with some labeling it as a “white elephant” – with concerns including accessibility to the public and whether it would truly eliminate noise from the surrounding business city streets.

Cohen said the goal is to create a “destination for people to come to,” similar to other projects like The Grove, with water features, bougainvillea trellises and sliding glass doors so restaurants and retail offer accessibility into their business.

“All three sides of the project are retail and restaurant food and beverage. We tried to invigorate all three entrances with that,” he said.

Neighborhood residents also had mixed support for the housing in the project, with some questioning whether the units were truly affordable. The 41 units are split between eight units for low-income residents, eight for moderate-income housing and the remaining 25 units for workforce units. Those restrictions still call for residents with incomes between $53,000 and $100,000 for one-person units.

But residents’ main concerns were focused on whether retail and office space would go unfilled, with the expectation that people will transition away from in-person work and shopping in a post-pandemic world.

Cohen said that market research has actually expressed the opposite, with demand for de-densification of office space increasing.

“You’re going to see this as a huge trend,” he said.

The West Hollywood West Neighborhood Association board did not take a formal position on the project following the presentation, but vice president Manny Rodriguez called the meeting “informative.”

“We’ve been following this for 20 years, and it took a lot to get the last approved plan,” he said in an interview. “What we really want to do is offer constructive comments that we might find would be useful to the developers. In the end, I think everyone wants something built there finally. We don’t want it to stay this stagnant hole in the ground any longer.”

He emphasized the biggest concern is that the project be something that can coexist with surrounding residents.

“We’d love to see something that the community can use, the community can access, [where] businesses can flourish and stay – these are all important things not just for our neighborhood but also West Hollywood,” he said.

Jim Arnone, the land use counsel for the project with firm Latham and Watkins, said the developers are still in the community outreach portion of the project, and are hoping to get approval on the updated project from the West Hollywood Planning Commission in April. Their current permits require construction to start by April 2022.