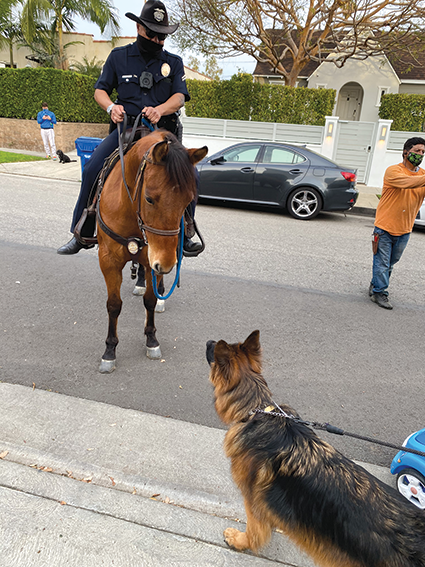 Members of the LAPD’s Mounted Unit recently provided a high-profile presence in the Melrose community, and will be deployed again as resources permit. (photo courtesy of the Melrose Action Neighborhood Watch)

To address crime in the Melrose Avenue shopping district, the Los Angeles Police Department has deployed its Mounted Unit, providing a high-profile police presence in the area.

The officers on horseback were in the area on Feb. 3 and plans call for them to return weekly if available, said Capt. Shannon Paulson, from the LAPD’s Wilshire Division. The area has experienced a pair of shootings recently and police are using all available resources to combat crime, Paulson said. In addition to occasional appearances by the Mounted Unit, extra patrols and undercover officers are among the tactics being used.

Some residents said the horses are a welcome addition and make people feel safer, but it is uncertain what long-term effect they will have on crime. Peter Nichols, cofounder of the Melrose Action Neighborhood Watch, collects information from numerous residents, block captains, businesses and law enforcement sources, and said people are concerned about an increase in violent crime.

Nichols added that he is concerned about an armed robbery that occurred on Feb. 8 in an alley off the southwest corner of Melrose and Sierra Bonita avenues. The victims were robbed at gunpoint of expensive jewelry, according to police. Nichols said he has heard reports of four other street robberies occurring since mid-January, including another robbery near Melrose and Sierra Bonita avenues.

Also, a man was arrested on Jan. 12 for a car-to-car shooting that left one man dead, police said. Investigators believe that was precipitated by a dispute. Another homicide that occurred on Dec. 15 remains unsolved, said Det. Sean Kinchla, with the LAPD’s West Bureau Homicide Unit.

Kinchla added that there is no evidence the two homicides are related, or that there is any connection to robberies in the Melrose area. Nichols said he hopes police take further action to address the crime in the area.

“There are far too many of these occurring,” he said. “I know the police are doing what they can, but more needs to be done. This is an area still reeling from an unsolved murder. The mounted police are a welcome thing, but the residents I know wish it could be an everyday occurrence.”