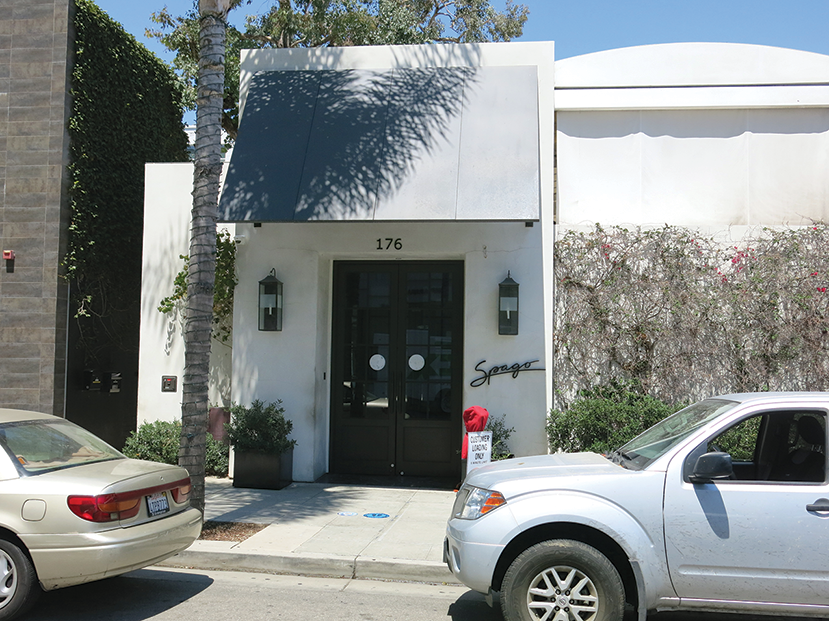 Spago in Beverly Hills will soon resume operations in an outdoor tent. (photo by Cameron Kiszla)

A pair of Beverly Hills restaurants will be able to host their diners in tents on Canon Drive after a unanimous vote by the Beverly Hills City Council on Feb. 1.

The famed restaurant Spago and an as-yet unopened steakhouse, Nusr-Et, plan to erect a pair of tents in the 100 block of Canon Drive, which is already closed to through traffic due to the temporary sound wall that separates Canon Drive from Wilshire Boulevard. The wall was built to mitigate the construction noise from the Wilshire/Rodeo station on Metro’s Purple Line subway project.

To accommodate the tents, which will encompass the entire block when the shared valet station is included, the city plans to turn the intersection of Clifton Way and Canon Drive into a roundabout.

Councilwoman Lili Bosse said the changes to Canon Drive coalesce with the city’s OpenBH program, which allows the city’s businesses to operate outdoors to keep employees and customers safer during the pandemic.

“We’ve felt that we need to partner with our restaurants and help them … This is a new way of continuing along the lines of what we’ve done,” Bosse said.

Approximately 150 diners will be able to be accommodated in the two tents, which will include two parallel walls for support and vinyl coverings to protect the diners inside from the elements while allowing the space to remain ventilated in accordance with the regulations of the Los Angeles County Department of Public Health, said Laura Biery, the city’s marketing and economic sustainability manager.

“One of the biggest concerns from county health was the number of walls … ventilation is of the utmost importance to county health,” Biery said.

Councilman Julian Gold was also concerned about diners congregating before or after their meals, putting themselves and others at risk of COVID-19 infection, though the restaurants’ representatives assured him and the rest of the council that they would be vigilant in dispersing customers once their meal was finished and in preventing customers from gathering before they are seated.

“We certainly have seen, in the city, areas where people wait for their reservations. They congregate, and it’s not good for them and we hear about it a lot. We want to be sure that we don’t create that somewhere else,” Gold said.

Nusr-Et plans to begin as a tent-based dining room before opening its brick-and-mortar location. (rendering courtesy of the city of Beverly Hills)

While Spago will be able to resume operations in its tent relatively easily, Nusr-Et faces a more difficult challenge. The steakhouse, one of several owned by internet celebrity Nusret Gökçe, also known as Salt Bae, had expected to open last month, though the pandemic prevented that from happening. The Los Angeles County Department of Public Health has not awarded Nusr-Et the necessary permits to operate because the brick-and-mortar location is not yet ready. The city normally would not grant permission for a restaurant without proper health department permits to begin construction to accommodate outdoor dining, but in this case, Nusr-Et needs a physical location – the tent – as part of the health department permitting process.

Despite the hurdles faced by Nusr-Et and the impact the street closure and tents will have on the surrounding area, several neighbors of the restaurants spoke during public comment in support of the tents, as did the restaurants’ representatives.

Barbara Lazaroff, the business partner of Wolfgang Puck, Spago’s chef, said despite the competition of a new restaurant operating next door, she was thrilled that Nusr-Et would help bring “vitality to Beverly Hills.”

“I’m happy to have [Nusr-Et] next to us. It’s very important to not have empty space sitting on the street,” Lazaroff said.

Lazaroff and Steven Magnus, who represented Nusr-Et, added that despite the high cost of the tents – Magnus estimated Nusr-Et’s tent at $240,000 and Lazaroff said Spago’s cost $300,000 – they were necessary for their businesses.

“It’s a huge investment, it’s monumental, but it’s a tradeoff. We don’t see any other way to survive,” Lazaroff said.

The street closure will return to the council for review in six months.

“We all want to take a look at what we want to do with Canon at that time,” Mayor Lester Friedman said.

More city streets could be similarly changed in the coming months if Vice Mayor Robert Wunderlich is successful in his efforts to discuss the matter further. Continuing his efforts that began last year, Wunderlich again pushed for more public use of city streets during the pandemic, which he noted is not ending in the near future.

“It’s still not too late for us to have some sort of pilot program, to let people experience it, and then with the benefit of that experience, to see if it’s something we’d want to keep in place,” Wunderlich said.