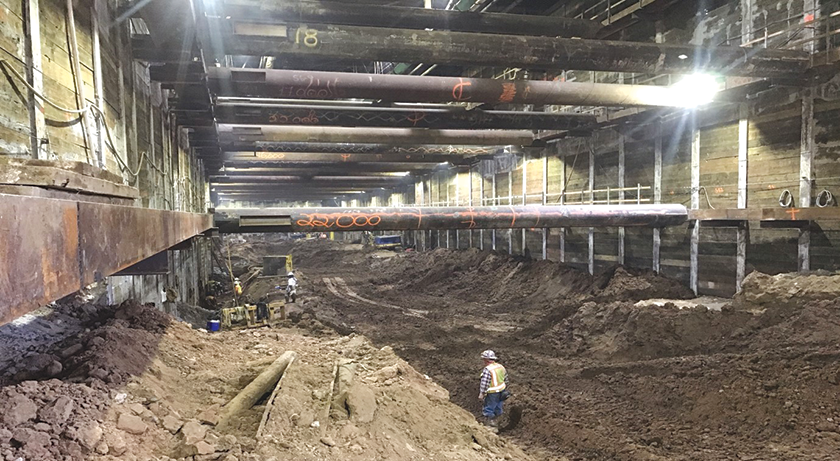 Crews have reached an average depth of 85 feet at the future Wilshire/Rodeo subway station, with a goal of reaching 100 feet by the end of the first quarter of 2021. (photo courtesy of Metro)

Work will continue in February on the first two stages of the Purple Line Extension subway project along Wilshire Boulevard from Century City to Wilshire/Western.

In Beverly Hills, excavation continues at the future Wilshire/Rodeo subway station. No work will occur on Monday, Feb. 15, in observance of Presidents’ Day.

Crews have reached approximately 85 feet in depth toward the goal of reaching a final depth of 100 feet by the end of the first quarter of 2021. New hauling hours for removing soil will necessitate intermittent lane closures on Wilshire Boulevard between El Camino and Crescent drives.

As excavation nears completion, construction of the underground station will enter a new phase. More materials and equipment will be brought to the site as station construction continues through 2024.

Station construction, material deliveries, instrumentation and concrete pouring continue at the Wilshire/La Cienega station box. Ongoing concrete and material deliveries to the Wilshire/La Cienega station box are anticipated to continue this week. Work will be conducted from Wilshire Boulevard and within the Gale staging yard from 3 a.m. to 6 p.m.

Eastbound Wilshire Boulevard may be intermittently reduced to one lane from 7 a.m. to 4 p.m., and 8 p.m. to 7 a.m., as needed. The closure may also be implemented on Saturdays from 7 a.m. to 4 p.m. Additional intermittent lane reductions, turn restrictions and sidewalk closures may be in place. Gale Drive will be intermittently closed at Wilshire Boulevard to support construction in the Gale staging yard. Work hours are 4 a.m. to 6 p.m., Monday through Saturday. Access to Gale Drive will be maintained from San Vicente Boulevard.

Station construction, hauling and concrete pouring also continue near Wilshire/Fairfax. Work hours in the Ogden staging yard have increased to 24 hours, six to seven days a week for approximately the next two months. To protect workers in the tunnels, the temporary ventilation system will run full speed 24 hours. The period of increased work supports tunneling under the Wilshire/San Vicente intersection.

At Wilshire and Rimpau boulevards, a work zone on the west side of the intersection of is anticipated to be in place through March 2022. Wilshire Boulevard has been reduced to two lanes in each direction between June Street and Muirfield Road. Concrete and material deliveries are anticipated to continue at the site. Wilshire Boulevard may be intermittently reduced to a single lane in each direction to support ongoing concrete pours in the enclosure.