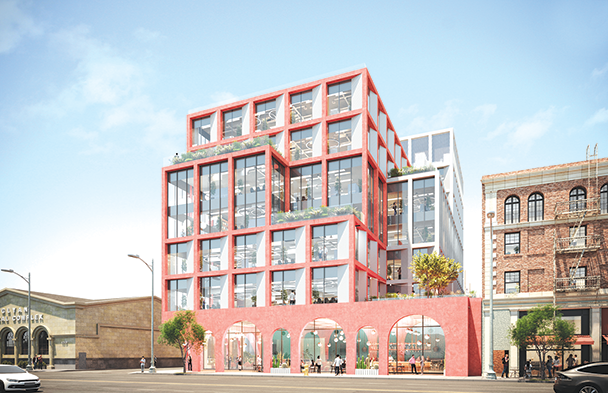 1000 Seward and 1235 Vine are expected to open in Hollywood in 2024. (photos courtesy of Plus Development Group)

A Hollywood filmmaker has teamed up with a multinational real estate development firm on a pair of large-scale, high-end office projects in Hollywood aimed at serving as a “creative hub” for tenants primarily in the entertainment industry.

The projects – dubbed 1000 Seward and 1235 Vine – will bring a combined 258,000 square feet of commercial office space, above and below ground parking, public open space, landscape terraces, and retail and hospitality uses.

They’re hoping to present the plans to Los Angeles City Council by the end of the year, with both projects then on track to be completed by 2024. Developers declined to release the project costs.

The developments are part of a partnership between Plus Development, led by co-founder Chris Carlin and partner Mick Unwin, and Matt Cooper, a veteran filmmaker, writer and producer. The trio said the goal of the architectural design was to take advantage of the California sunshine, while also adhering to post-COVID trends like touchless sensors.

“We really made an effort to capture as much outdoor space as possible,” Carlin said, adding that the building incorporates the rooftops and windows offering panoramic views of the city.

Carlin and Unwin said that they’ve been attracted to the area for a while, as Plus Development recently constructed its headquarters down the street at 743 Seward St. They were inspired to develop in the area based on other projects going up around them, whether it was residential or commercial.

“We previously were quite invested in this neighborhood. We thought it was going to change. We’ve kind of nicknamed it SoHo. You have NoHo, you have WeHo. If you get enough critical mass in this location, it’ll be rebranded as SoHo,” Carlin said.

Unwin added that they were inspired by the fact that the area had a strong-bounce back after the 2008 Economic Recession – and that “we expect it to do the same” after the pandemic is over.

Its place in Hollywood has led the trio to expect a show business-oriented clientele, which has allowed Cooper, a veteran of the industry, to give input on what those tenants may expect.

“I know exactly what my clients want, whether it’s a certain type of air, certain types of electrical requirements, down to the height of their rooms, dimensions of their rooms – all kinds of things that we’re intimately acquainted with,” he said.

Cooper said that his involvement was due to the desire to move away from the “cookie-cutter”-type office spaces and create a “creative hub.” He also said that while the expectation is that the realities of COVID-19 have made much office work obsolete, he feels that the entertainment industry will continue to look for communal spaces.

“We feel really strongly that the entertainment sector is unlike any other sectors … in that the remote workplace is still possible,” he said.

While the project is in the early stages, the trio said that they have heard initial interest from some tenants, but didn’t provide names – and stressed that the clientele served will be open to everyone, not just those in the entertainment industry.

1000 Seward and 1235 Vine are the first of roughly a dozen projects in the United States that are part of the partnership, with other projects planned in Hollywood and Santa Barbara. They also have a project called Grange Castle Media Park in Dublin, Ireland, which is a joint venture with Lens Media Limited and includes soundstages.