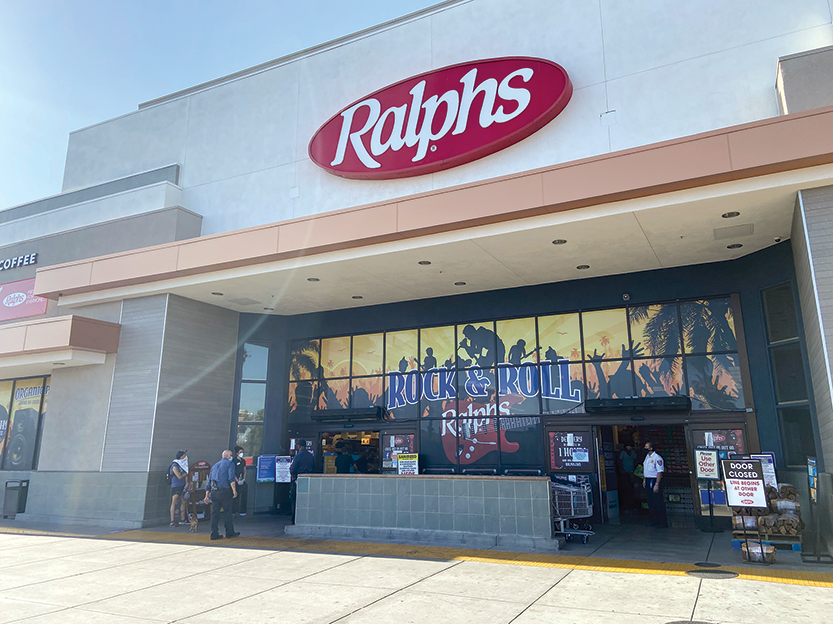 Ralphs grocery stores, including the supermarket on Sunset Boulevard in Hollywood, would fall under the city’s hazard pay law. (photo by Edwin Folven)

The Los Angeles City Council approved a plan on Feb. 2 that will initiate the first steps to require grocery stores with more than 300 employees to pay workers an additional $5 per hour above their regular hourly wage while public health orders are in effect.

The approval included an amendment by Councilman Joe Buscaino, 15th District, and seconded by O’Farrell, to have the city’s chief legislative analyst examine the impact of the proposed hazard pay motion on disadvantaged communities, and have that included in a report back to the City Council.

“Since the pandemic began, grocery store workers have put themselves on the frontlines every day so that we can stay safer at home. They and their families have also suffered from higher rates of COVID-19 infection, illness and death as a result,” O’Farrell said. “I cosponsored an initiative requiring mostly large retail grocery and drug retail chains to pay an additional $5 of hourly hazard pay for on-site workers. [The] unanimous approval by my council colleagues moves us one step closer to this imperative. As grocery store and drug retail chains earn record profits, our essential workforce deserves to be justly compensated.”

Koretz, who said one of his first jobs was working in a supermarket, also supported requiring hazard pay for employees.

“I know the folks that work in supermarkets, none of them signed up with the expectation that they would be heroes and that they would be risking their lives to do their jobs, but they have, and some have lost them,” Koretz said. “Some supermarkets have not had the proper protocols throughout this pandemic. Many people have gotten COVID as a result. Certainly, the modest pay that they were receiving before should be supplemented by this step.”

Koretz added that the city should consider other workers, possibly in other branches of the retail industry, for possible hazard pay and stressed that it is important not to create more burden for small grocers and business owners who are likely already struggling to stay afloat during the pandemic. Raman highlighted that the City Council motion only pertains to large chains with 300 or more employees, and echoed the need to protect small businesses at the heart of communities. She said there has been much support among community groups and workers in the 4th district.

“We received a number of letters in support of the ordinance to our office from groups across the spectrum fighting for the rights of workers and for a just Los Angeles,” Raman said. “It’s beautiful so many groups have spoken up and reached out to us in favor of this ordinance and I just wanted their words to be reflected in [these] discussions.”

Other cities have taken similar steps, including the city of West Hollywood, which has also asked its city attorney to draft a hazard pay ordinance, and the city of Long Beach, which plans to implement an ordinance requiring an additional $4 per hour. Some large grocery store chains have pushed back on the potential requirements, including Kroger – owner of Ralphs and Food 4 Less stores – which announced it will close two supermarkets in Long Beach after the City Council in that city approved a hazard pay ordinance. According to Kroger’s quarterly dividend projection published on its website on Jan. 29, the company’s “quarterly dividend has grown at a double-digit compound annual growth rate since it was reinstated in 2006. The company continues to expect, subject to board approval, an increasing dividend over time,” the report read.

“Certainly, the Kroger’s of the world … absolutely can afford this increase, they absolutely should be paying this increase, and if they shut down stores, it’s just out of spite,” Koretz said. “This is a really positive and important step and I thank my colleagues for their support on this.”