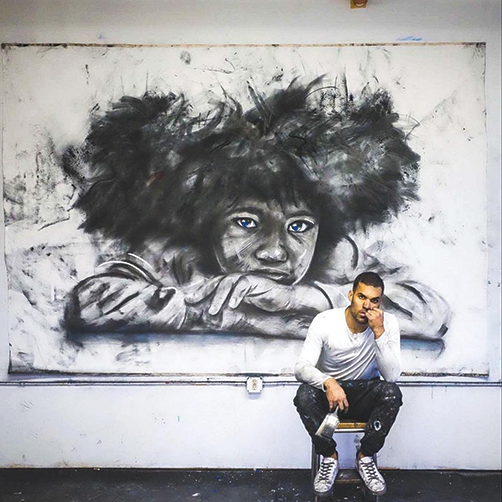 In his newest series of paintings, Johnson, a former player for the Los Angeles Dodgers, uses charcoal extensively and is particularly focused on capturing the gaze of his subjects. He has further expanded the style, exploring the effects of scale and perspective. Also looking at the double meaning of “perspective,” he incorporates stylized angles with the intent of prompting a revamping of viewers’ perceptions of the artworks, themselves and the world.

A central figure – the female astronaut – will also be unveiled symbolizing a reflection of the historic firsts for women of color, from venturing into space to coaching professional baseball and most recently making American history as the first female vice president of the United States. Johnson views the figure as an emblem of hope and progress for female youth and their limitless dreams.

“The debut of the female astronaut is an extremely important symbol of times highlighting the once inconceivable accomplishments and dreams which have become our new reality and a reminder of the many more that will be achieved,” said Jacquelin Napal, co-founder of Art Angels.

Johnson’s debut exhibit, titled “Mom, Can Astronauts Be Black,” was one of the most successful debuts in Art Angels history. “Black Sheep” continues to build on the external and internal realities and present day struggles of society.

The exhibition is open for viewing by appointment, Monday through Saturday, through the end of February. Art Angels Gallery Los Angeles is located at 9020 Beverly Blvd. For information, call (310)693-5500, or visit artangels.net.