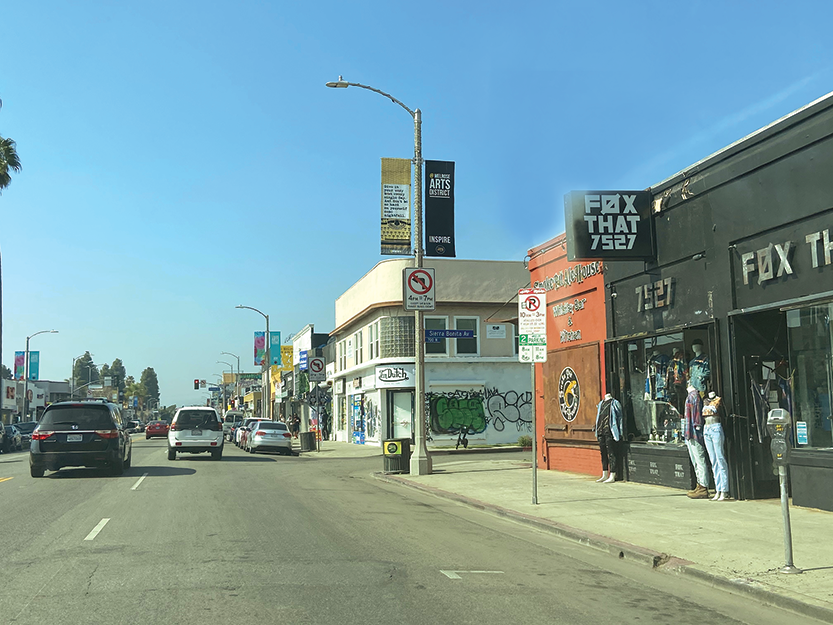 Police are trying to address a recent robbery spree that has been occurring in the Melrose Avenue shopping district. (photo by Edwin Folven)

Police plan to continue maintaining a strong presence in the Melrose Avenue shopping district in an effort to reduce violent crime that has been occurring over the past two months.

From Jan. 1 to Feb. 11, robberies increased 60% in the Los Angeles Police Department’s Wilshire Division over the same time last year, with 20 more hold-ups than in 2020. Overall violent crimes are also up, with 18 more occurring than during the same period in early 2020.

The increase is tied to robberies in the Melrose area in which people wearing expensive jewelry are targeted, Wilshire Division Capt. Shannon Paulson said. At least seven street robberies have occurred since Jan. 30 in which Rolex watches were stolen from victims, she said.

One armed robbery occurred at approximately 4 p.m. on Jan. 30 in the 700 block of North Vista Street and security camera footage was found showing the hold-up. It can be viewed by visiting lapdonline.org. On Tuesday, police asked for the public’s help in identifying two male suspects in the video who can be seen knocking the victim to the ground, robbing him at gunpoint and stealing a Rolex watch. The suspects drove up in a white compact car as the victim was either getting into or out of a parked vehicle on Vista Street near Melrose Avenue, and quickly fled after the robbery.

Paulson said the robberies are likely tied to a crew and suspects may be following victims wearing expensive jewelry as they leave restaurants or stores. At least two similar hold-ups in which expensive jewelry was stolen have also occurred recently on Third Street near La Cienega Boulevard. Authorities said the suspects may be using different vehicles and appear to wait until victims reach isolated areas before robbing them at gunpoint.

The LAPD has been using a multi-pronged approach to addressing the crimes, such as deploying additional patrols, undercover operations and the Mounted Unit. Officers on horseback were in the area last weekend and Paulson said plans call for them to return three days per week, this week and next, if they aren’t needed elsewhere in the city. Specific dates are not released for tactical reasons. She said the Mounted Unit is a specialized unit that operates out of the LAPD’s Metropolitan Division and LAPD command staff determined it would be useful in addressing crime in the Melrose area.

The horses are high-profile, so they provide a deterrent, and the officers can move more quickly in confined areas than vehicles, Paulson said. They are also popular among many people in the community, she added.

“The officers are not behind the doors of a black and white. They are easy to engage with and it’s good for the community,” Paulson said. “They have a high visibility, maneuverability and speed that can be useful.”

Some residents also said they are appreciative of the extra patrols and the recent focus on crime, including the Mounted Patrol.

“A lot of neighbors are saying they appreciate it. I know families enjoy seeing the horses,” said Peter Nichols, founder of the Melrose Action Neighborhood Watch. “While we are very appreciative, there is still deep concern about the state of the street, and more concerning is the recent rash of robberies.”

Nichols said he has also heard some complaints from neighbors that more citations are being issued to cars parked on the streets around Melrose Avenue but added that he understands the reason.

“I got a ticket. I had a placard that wasn’t displayed. What are these people expecting, selective enforcement?” he added. “I’m glad they are checking these cars. The people who commit these crimes don’t park on Melrose. They park north and south on the streets.”

Paulson also said officers are patrolling the neighborhoods because that is often where the robberies occur. Suspects frequently use stolen cars or fake license plates and checking vehicles is part of enforcement, she said. All laws must be enforced equally, Paulson added.

Los Angeles City Councilman Paul Koretz, 5th District, said he is pleased that the LAPD is taking a more proactive approach and added that he has advocated for increased funding for the department to combat crime throughout the city.

“We are getting complaints from people across the city because violent crime is going up. At the same time, there is a push by some to eliminate law enforcement and funding for it. Obviously, I am not on that side,” Koretz said. “I feel bad if some people get tickets but the way to avoid that type of thing is to obey the law. I don’t think the city needs to apologize for enforcing the law. We are trying to bring as many resources as we can to the table. I’m certainly pushing for being as aggressive as possible on it.”

Authorities added that people should always be aware of their surroundings, take steps to minimize becoming a target such as not wearing expensive jewelry or walking alone, and should report any suspicious activity. Anyone with information about the robberies is urged to contact Wilshire Division detectives (213)922-8217.