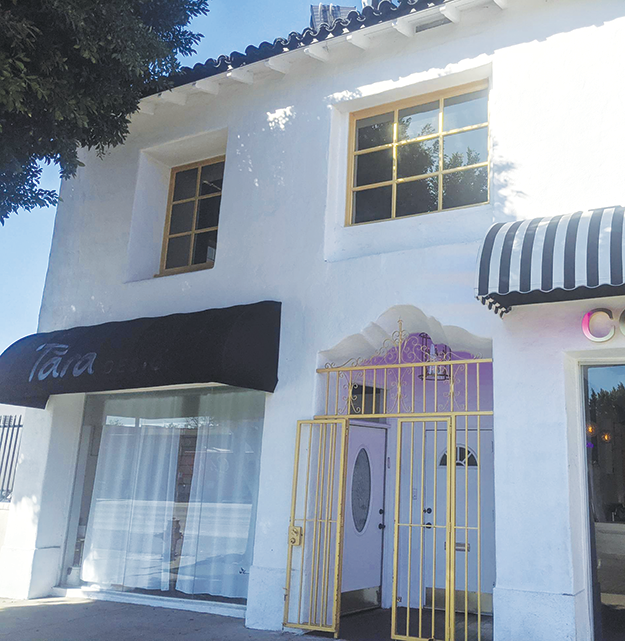 A commercial space in the 300 block of North La Brea Avenue has allegedly been used for illegal gatherings during the pandemic. (photo by Justin Sayers)

The Los Angeles City Attorney’s Office has filed charges against multiple people for their alleged involvement in hosting illegal parties during the Los Angeles Safer at Home order issued in response to the COVID-19 pandemic.

The misdemeanor charges allege violations of city municipal and administrative codes. Seven people are charged in connection with unrelated incidents at three different locations in the Hollywood Hills and Melrose District. The locations have been described by authorities as short-term rentals.

Two of the defendants, Bryce Hall and Blake Gray, are social media celebrities on TikTok, and a third, Nyjah Huston, is a professional skateboarder and social media star with 4.5 million followers on Instagram. Hall and Gray are charged in a separate incident not connected with the one allegedly involving Huston.

Hall and Gray each pleaded not guilty on Feb. 18 to a single charge of violating the city ordinance regarding party houses. Los Angeles City Attorney Mike Feuer announced charges against them last summer after they allegedly hosted parties on Aug. 8 and Aug. 14 at a home they rented on Appian Way in the Hollywood Hills. Los Angeles Police Department officers responded to the home after receiving a complaint on Aug. 8 and issued a citation to the party host, authorities said. A second citation was issued after police received another complaint about a party on Aug. 14. When the charges were first announced, Feuer said Gray acknowledged at the time of the alleged second offense that he was aware of the previous citation. On Aug. 19, utilities were shut off at the house per directives from Mayor Eric Garcetti’s office.

Huston was charged for allegedly hosting a party on Jan. 9 at a residence in the 800 block of North Curson Avenue. LAPD Wilshire Division Capt. Shannon Paulson said officers responded to complaints and found approximately 40 people at the residence. A citation for violating the city’s party house ordinance was issued and because there had also been a previous citation at the location, the utilities were shut off at the residence on Jan. 12. Also charged in that case is the property owner, Edward Essa.

It was unclear whether the utilities remain shut off at both locations, but Paulson said to her knowledge, they remain off until there is a resolution of the criminal charges.

The Los Angeles City Attorney’s Office also announced misdemeanor charges against the owners and operators of a commercial space in the 300 block of North La Brea Avenue for allegedly hosting large gatherings or renting the space for parties during the pandemic. The space, known as Hidden River, was allegedly used for gatherings on Jan. 14 and 22. The defendants in that case – Brandon Miller, Oshri Elmorich and the company Royva Inc., each face misdemeanor counts of violating city administrative code.

Penalties for the violations include up to one year in jail and $2,000 in fines. Feuer vowed to continue the crackdown on party houses because of the potential they could become super-spreader events.

“It has been nearly a year since the coronavirus pandemic began dramatically changing our daily lives and threatening public health and safety,” Feuer said. “During this crisis, my office has held those individuals and businesses who have had large indoor gatherings, violating important public health and safety orders, accountable. That vital work continues.”