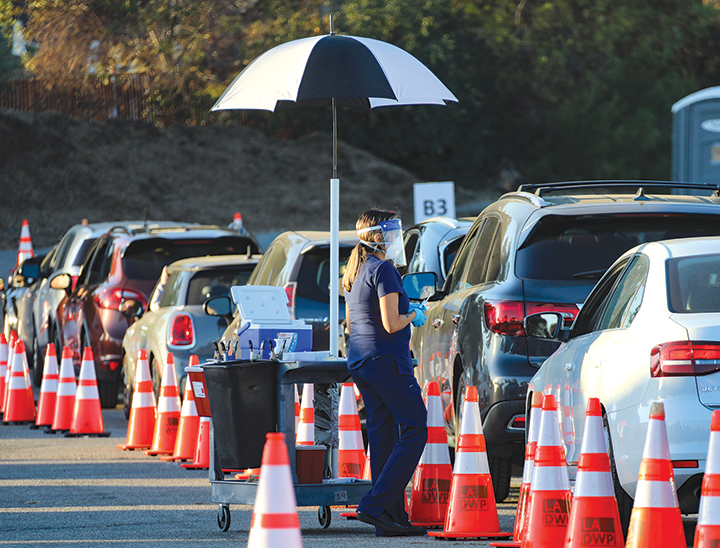 COVID-19 vaccination efforts are ramping up throughout Los Angeles, including at Dodger Stadium, after delays in supplies. (photo courtesy of Los Angeles Mayor Eric Garcetti’s office)

Los Angeles Mayor Eric Garcetti has announced the launch of the Mobile Outreach for Vaccine Equity program – also known as MOVE – an effort to scale up mobile vaccinations in some of the most vulnerable neighborhoods of Los Angeles. The program builds on a pilot initiative that has already administered more than 4,200 COVID-19 vaccine doses in neighborhoods in south and east L.A.

“Vaccines can be a powerful instrument of equity, and we must act now to tear down any barriers that stand between these life-saving doses and Black, Latino and low-income Angelenos,” Garcetti said. “By delivering doses directly into our communities, our city is sending a clear message: as we work to protect people’s health and defeat this pandemic, no one will be left behind.”

During the first week of the pilot project from Feb. 2-5, the city’s mobile vaccination clinics served over 1,300 people in South L.A., where two-thirds of the doses were administered to members of the Black community and over 90% to people of color.

As part of the first steps of the MOVE initiative, services have expanded to South Park, Green Meadows and Boyle Heights this week. In the days ahead, teams will be deployed to Chinatown, and the Vermont Square and Pico-Union districts. By the end of March, the city will have deployed 10 mobile vaccination teams in the field, with additional sites throughout Los Angeles.

All locations are areas with a high risk profile, as measured by the L.A. County COVID-19 Medical Vulnerability Indicators. Each mobile clinic has the capacity to vaccinate 200 people per day, with the ability to scale up that number as more supplies arrive.

To ensure vaccines are reaching individuals who need them most, MOVE teams will begin enhanced outreach, working alongside local community leaders to help people book appointments, secure transportation and build trust and confidence in the vaccine.

Los Angeles’ communities of color represent the highest number of cases and deaths by COVID-19 in the region. In Los Angeles County, Latinos represent 63% of cases and 52% of deaths – the largest share in the county despite representing 48% of the population.

Beyond the MOVE program, the city is working to increase vaccination accessibility to people of all abilities, which is why the mayor announced the opening of a new express lane at the Dodger Stadium site for customers of Access Services, the agency that provides transportation for Angelenos with disabilities. The new lane opened on Feb. 22 after new supplies of vaccines were received by the city of Los Angeles following delays. Eligible Access riders can book an appointment and a round-trip ride by calling (626)532-1616. For information, visit corona-virus.la and publichealth.lacounty.gov.