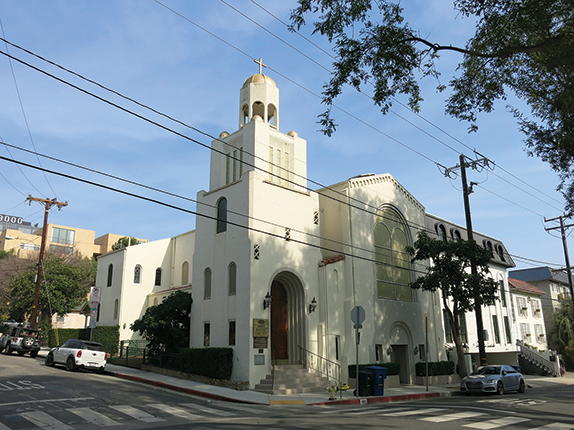 The First Baptist Church of Beverly Hills was established in 1952 and moved to what became the city of West Hollywood the next year. (photo by Cameron Kiszla)

A West Hollywood church is suing a Beverly Hills developer and the West Hollywood Community Housing Corporation over claims it will not receive what it was promised in a new housing development.

The First Baptist Church of Beverly Hills, which is located at 9025 Cynthia St. in West Hollywood, sold three parcels of land at 910-916 N. Wetherly Drive to Beverly Hills developer David Aghaei of Oak Road Capital in 2017 so Aghaei could build luxury condominiums, said Mark Kawa, an attorney representing the church. In addition to the $1.5 million sale price, Aghaei agreed to give the church two luxury condominiums and 18 to 20 parking spaces to replace the parking lot and two houses that currently exist on the Wetherly Drive parcels. An amendment to the agreement made in 2018 allowed the church to lease the condos for $1 per year for 99 years rather than purchase them outright, according to the lawsuit, and in exchange, the church was paid an additional $605,000.

The residences are intended to house the church’s pastor and associate pastor, Kawa said, and the parking spaces are necessary for the church’s attendees.

“Critically important to this entire agreement that we reached with David Aghaei was not only that he would deliver two luxury condos, which is obviously very important, but that he would also deliver the parking spaces that he promised, because even after the houses are razed and the property is developed, there needs to be parking spaces for the church and its congregation, and that is critically important,” Kawa said.

However, before escrow closed with the church, Aghaei was in talks with the West Hollywood Community Housing Corporation to sell the parcels for the Wetherly Palms affordable housing complex, which plans to build 100 affordable units in a seven-story building, Kawa said. When the WHCHC acquired the property in 2019 for $2.65 million, they also acquired David Aghaei’s contract with the church” and that the WHCHC “has to perform what he promised the church,” Kawa added.

“It’s the church’s belief and contention that the West Hollywood Community Housing Corporation cannot satisfy that obligation because they are not in the business of building luxury condos,” Kawa said. “They are in the business of building affordable housing. We do not believe that West Hollywood Community Housing Corporation, whether their intentions are honorable or otherwise, is going to be able to perform the obligations that they’re required to perform.”

Kawa said the church wants to “rescind the entire agreement based on Aghaei’s fraudulent representations.”

“If that is not an available remedy, then we will seek damages and punitive damages against David Aghaei and his alter ego entities, Oak Road Capital and … a limited liability company [he formed] to acquire the property, 916 Wetherly LLC,” Kawa said.

The suit, which was filed last year, is ongoing, Kawa said.

“The church, being a Christian organization, is certainly not in the business of litigation,” Kawa added. “However, the circumstances of this case are so egregious and the conduct of Mr. Aghaei is so egregious. The circumstances that the church finds itself in, if the West Hollywood Community Housing Corporation goes forward with their project, mandate that we proceed with this litigation to get a just result.”

Aghaei declined to comment, and Sam Borelli, director of external affairs for WHCHC, said in an email that the organization had no comment.

“We remain focused on our mission of building homes and providing services that move community members from insecurity to stability,” Borelli said.

Get a vaccine, get a ticket at Chinese Theatre

Wait, let me get this straight…a church sells land to David Aghaei, who according to his LinkedIn, used to be the Planning Commissioner for the *CITY* of West Hollywood…who promises to buy the property for $1.5 million and to also give the church TWO luxury condos…and all the same time is lying out of his mouth to this church because he’s simultaneously talking to the WeHo Housing Corporation to sell the property for $2.7 million…and this is a guy who’s a PUBLIC SERVANT?? And he was *THE* planning commissioner for the city??? Hmmm…you know what they say…if it smells like a duck and quacks like a duck…Or, I guess in this case: If it smells like a rat and squeaks like a rat…haha…