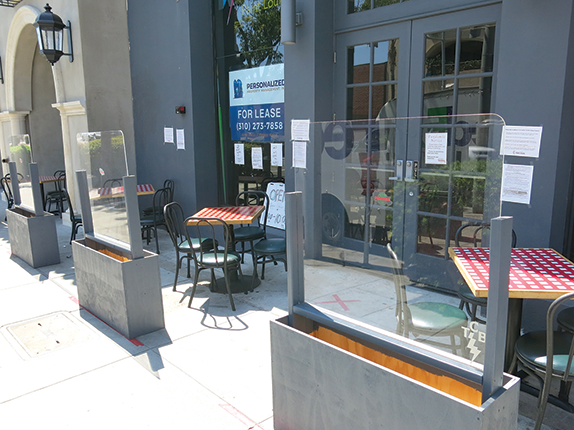 Outdoor dining on sidewalks is offered through two programs in Beverly Hills, the Open Air Dining Program and OpenBH. (photo by Cameron Kiszla)

The City Council on Feb. 16 directed city staff to return with an ordinance that would align the city’s existing outdoor dining program, which awards Open Air Dining Permits, with the OpenBH program, which was created in response to the pandemic and allows businesses in the city to operate outdoors using special event permits.

“The purpose is to create equity between those two programs and not have a benefit for having one type of permit versus the other type of permit,” said Ryan Gohlich, the city’s assistant director of community development.

The changes will not take effect until an ordinance is formally approved – Mayor Lester Friedman said such an ordinance would be reviewed by the council “as soon as we can” – but council members expressed support for making the changes retroactive to the beginning of the pandemic and having all Open Air Dining Permits be automatically extended for a year.

“I think the restaurants should be on 100% equal treatment. In terms of timing, I think it should be retroactive, and … it should go through the end of the time period when we have no lease payments for OpenBH. Why would we have a different date for this?” Vice Mayor Robert Wunderlich said.

The Feb. 16 decision comes two weeks after council allowed Spago and the steakhouse Nusr-Et to erect tents in the 100 block of Canon Drive. The tents will be able to accommodate approximately 150 diners in an outdoor setting that complies with regulations of the Los Angeles County Department of Public Health.

The idea was strongly supported by the council members, who stressed their support for the city’s restaurant industry.

“I’m 110% in favor of suspending this, at least until the end of the restrictions,” Councilman Julian Gold said.

Councilwoman Lili Bosse one-upped her colleague, saying she was “1,010% supporting this.”

“We absolutely have to help our restaurant industry. They’re among the hardest-hit that we’ve seen,” Bosse said.

The fees associated with the Open Air Dining Permits contribute approximately $140,000 per year each year to the city, but Gohlich said the loss of the income is already included in the city’s budget calculations.

“Because we’d already suspended the collection of fees once indoor dining ceased, those revenue reductions are already reflected in the current budget forecasts,” Gohlich said.

The council members also spoke to the potential for outdoor dining, as well as other outdoor business uses, remaining in place once the pandemic has ended. Councilman John Mirisch noted that the popularity of outdoor dining is one of the silver linings of a pandemic that had so many negative effects.

“Obviously, it was terrible when restaurants are closed, but we live in Southern California, which for much of the year is amenable to outdoor dining,” Mirisch said.

Bosse said that she has heard from “so much of our community” that wants to see OpenBH extended beyond the pandemic.

“I think we need to do everything we can to help our community, and I wholeheartedly support this,” Bosse said.

Wunderlich, who has expressed support for allowing different uses of public space during the pandemic, was similarly in favor of exploring post-pandemic changes.

“When people experience change, they often find that they like it,” Wunderlich said. “This is an opportunity for people to enjoy the benefits that come about from greater use of open space.”