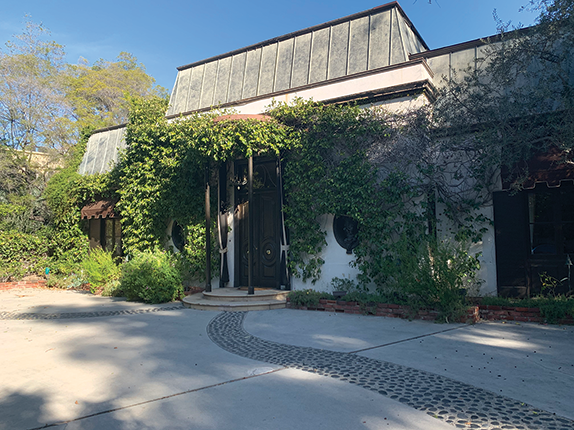 The Pendleton-Evans Residence was designed by prominent architect John Elgin Woolf. (photo courtesy of the city of Beverly Hills)

Last month, the Beverly Hills City Council finalized decisions on a pair of residential properties in the city.

The council voted unanimously on Jan. 26 to designate the Pendleton-Evans residence at 1033 Woodland Drive as a historic property and to allow some renovations to the site. Two additional unanimous votes taken by the council banned property line adjustments for lots that span city limits and rejected an appeal for a Trousdale Estates property that tried to combine three lots into two, one of which would have included portions in Beverly Hills and Los Angeles.

The Pendleton-Evans house was built in 1942 for art dealer and interior designer James Pendleton and his wife, Mary Frances, though it gained prominence for its longest-tenured occupant, film producer Robert Evans.

Evans, known for movies like “The Godfather,” “Rosemary’s Baby” and “Chinatown,” lived in the home from the 1960s until his death in 2019.

Aside from its notable occupant, the home also features a distinguished architectural pedigree. Built in the Hollywood Regency architectural style, it was designed by architect John Elgin Woolf, who was noted for the homes he created for movie stars like Judy Garland, Bob Hope and Cary Grant. The landscaping was done by designer Tommy Tomson, who also designed the landscaping at Park La Brea Apartments and the Beverly Hills Hotel.

“This is what is known to be the first Hollywood Regency done by John Woolf in Beverly Hills,” said Ryan Gohlich, the city’s assistant director of community development.

Councilwoman Lili Bosse said the decision to designate the property as historic was “quite easy” to make.

“This is probably the most iconic property, and the most awe-inspiring property, that I’ve seen in our community,” Bosse said.

Owner David Zaslav said he “fell in love with the property” and plans to restore the home to its former glory with the planned renovations, which include the addition of a guest wing to the home, the construction of a new tennis cabana and shed, a slight relocation of the tennis court and the reconstruction of a pool house that burned down in 2000. The scale and nature of the changes are in keeping with the property’s historic nature, the council members said.

Zaslav added that he shared many friends with Evans, and he hopes to host Josh Evans, Robert Evans’ son, in the guest wing.

“We think this is an extraordinary property, the ability to restore it and rebuild it … Our hope is to restore it for years and generations to come,” Zaslav said.

The council members were effusive in their praise for Zaslav and his plans.

“To me, a lesser Picasso – if you want to call it that – is still a Picasso, and a lesser John Elgin Woolf is still a John Elgin Woolf. Well, this is his ‘Mona Lisa,’ and the fact that you want to not only preserve it and, as we’ve heard now, take the original designs of the house that burned down and bring that back to life, that’s exactly why the Cultural Heritage Commission exists … I look at this as a gift to our [city’s historic] registry,” Councilman John Mirisch said.

“It is an iconic property. I thank you, Mr. Zaslav, for undertaking what’s going to be a major project, but what is really going to be a crown jewel in our city,” Mayor Lester Friedman added.

The council members confirmed their belief that the intercity lot would create issues, including that the property would not comply with the city’s general plan, and unanimously passed an urgency ordinance to prohibit the changing of lot lines that cross city limits.

“As much as we like Charles Dickens, we don’t necessarily want to have any more tales of two cities,” Mirisch said.