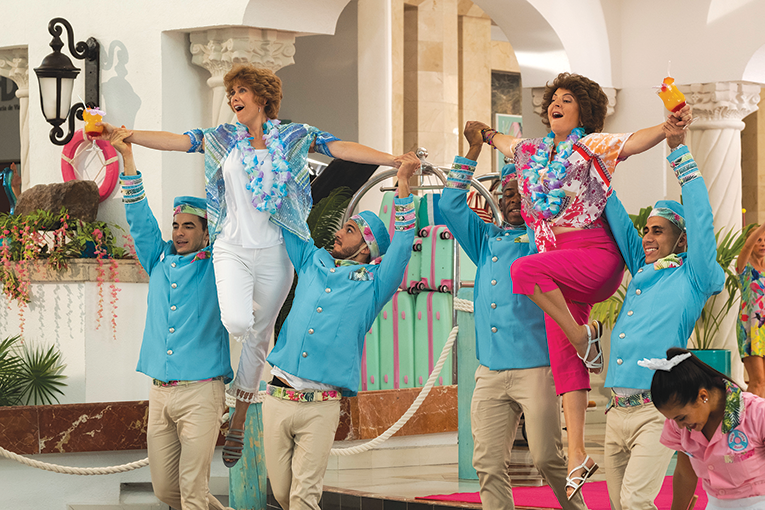 Kristen Wiig as Star, left, and Annie Mumolo as Barb are fun and refreshing in the new comedy “Barb and Star Go to Vista Del Mar.” (photo by Kate Cameron/courtesy of Lionsgate)

Finally a comedy brightens the dreary abyss of features that fit the bill in name only. “Barb and Star Go to Vista Del Mar,” available to rent, is easy viewing that goes down like a sea breeze. That hardly discounts the simple task this gem accomplishes where others fail with unfortunate frequency: producing barrels of laughs.

The premise reads like an “SNL” sketch. Midwesterners Barb (Annie Mumolo) and Star (Kristen Wiig) delight in their longtime friendship, chatting every day at work on their favorite couch (that they refuse to actually sell), even when only one of the pair clocks in. They even moved in together – same bedroom too, à la Lucy and Ricky – after a divorce and a husband’s passing.

In their small town, they live large – the bride of their weekly “Talking Club,” led by Debbie (Vanessa Bayer) – scoring fancy jobs as furniture saleswomen. Too bad brick-and-mortar shopping has changed, even if these BFFs’ hair hasn’t since Betty White ruled the small screen.

Jobless, now is the time to finally leave familiar surroundings for a much-deserved getaway. The locale: the exotic Vista Del Mar in Florida. Together, they’ll soak up some sun, schedule a few adventures and figure out what’s next in life.

One problem: nefarious villainess Sharon Gordon Fisherman (also Wiig) plans to annihilate the populace of the vacation paradise. How and why are pretty great. To accomplish this, she enlists her occasional squeeze Edgar (Jamie Dornan), willing to do anything so he and the Big Bad can finally become an official couple.

To truly sell “Barb and Star” would spoil far too much. It must be experienced in all its eccentricities. But some highlights are safe enough to expose, like a couple musical numbers, including a hilarious bit of beach frolicking thanks to “Fifty Shades” alum Dornan. Prepare for a few other splendid cameos – human, non-human and a hybrid of the two – as well. 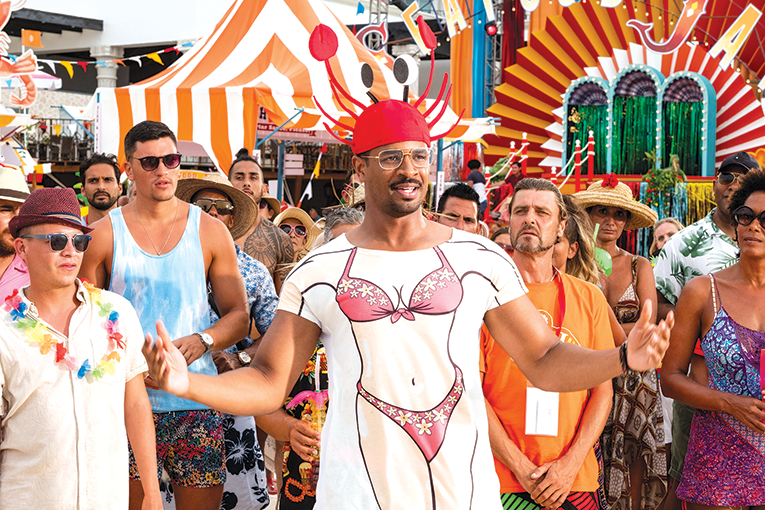 Add to that the titular heroines’ masterful gift of gab. The besties might lack the hip wardrobe or social literacy to garner a large pool of friends, but they elate in each other’s company, talking about nothing for hours. This makes for splendid dialogue, but it also reveals an enviable friendship so pure in its many oddities.

Since Wiig and Mumolo, both Oscar noms for their “Bridesmaids” screenplay, are actually quite close, their characters’ on-screen chemistry feels all the more authentic, even with some rather thick Midwestern accents (that occasionally sound like bad Irish ones).

It’s tempting to rank them, declare Wiig the stronger co-lead since she plays two characters, both equally looney in different ways. But that’s not so. Wiig’s Star might find herself romantically entangled with a morally compromised fling, but Mumolo’s Barb encounters a sea of equally zany bits.

Wiig and Mumolo won’t win any awards, but their latest project, directed by Josh Greenbaum (“Too Funny to Fail,” “Becoming Bond”), deserves more praise than what just made the shortlist for the Golden Globes in comedy or musical. Deeply quirky comedies often get overlooked, but this one shouldn’t.

“Barb and Star” belongs to a long history of spoofs, from “Airplane!” to “Hot Shots,” channeling the absurd shenanigans of “SNL” sketches and the short list of features.

But unlike its forebears, innuendo and more mature gags don’t drive this PG-13 ride. A few hilarious sex jokes prance by, but kooky sequences and that majestic Wiig/Mumolo dynamic morph this breakout comedy into something refreshing, slightly original and, yes, quite funny.

A solid comedy hasn’t graced the big or small screen in some time. Hulu’s “Palm Springs” came close shortly after quarantine began last year (fun and plotted well, but hardly laugh out loud), but “Barb and Star Go to Vista Del Mar” keeps the laughs coming for 107 minutes as the outlandish story builds and builds to a bombastic climax.

dineL.A. is back for two weeks

Vintage: Actress was a local legend