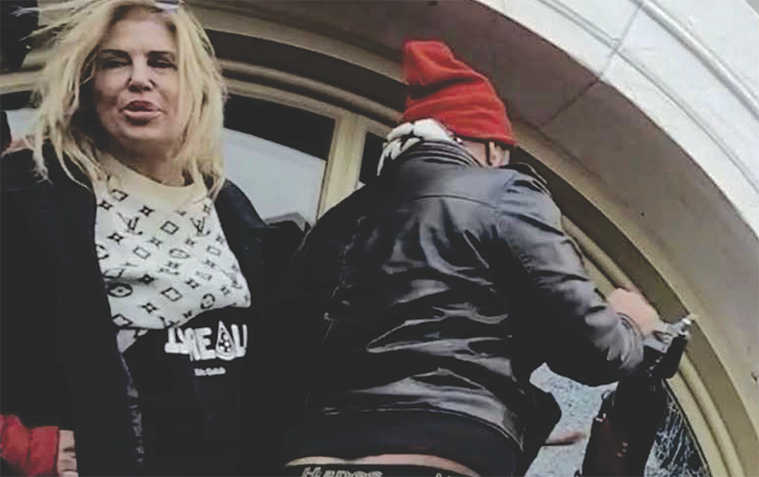 This photograph allegedly showing defendant Gina Bisignano during rioting at the U.S. Capitol on Jan. 6 was included with others in a statement of facts filed by the FBI in the case. (photo courtesy of the FBI/U.S. Department of Justice)

A Beverly Hills aesthetician who has been charged with multiple felony counts for allegedly participating in the insurrection at the U.S. Capitol on Jan. 6 was remanded into custody last week and sent to Washington, D.C., to answer charges.

Gina Bisignano, 52, had initially been released on bond and placed on home detention after her first court appearance on Jan. 19, but was taken into custody again on Jan. 20 after she was determined to be at risk for not reappearing in court. The U.S. Marshals Service was ordered to take Bisignano to Washington, D.C., said Thom Mrozek, spokesman for the U.S. Attorney’s Office in Los Angeles. Further hearings depend on scheduling by the courts in the nation’s capital, he said. The U.S. Attorney’s Office in Washington, D.C., which is overseeing the prosecution of alleged participants in the insurrection.

Bisignano was among three Beverly Hills residents arrested and charged last week for allegedly being involved. Frequently seen in videos at pro-Trump rallies in Beverly Hills, she was taken into custody on Jan. 19 and charged with six counts including civil disorder, destruction of government property, aiding and abetting, obstruction of an official proceeding, entering a restricted building or grounds, and violent entry and disorderly conduct.

FBI agents tied Bisignano to the alleged crimes through tips and videos posted on social media allegedly showing her at the scene, authorities said. A statement of facts filed with the federal criminal complaint outlined some of the evidence, including videos of her allegedly stating her name and personal information while at a Trump rally prior to the rioting, and footage allegedly showing her with a bullhorn inciting the crowd from a ledge at the U.S. Capitol. Authorities said they identified her at multiple locations during the rioting by a designer sweater and sunglasses she allegedly wore.

Two other defendants, Simone Gold, 55, and John Strand, 37, are believed to have traveled together to Washington, D.C. They were taken into custody in Beverly Hills on Jan. 18 and also face multiple charges separate from the case against Bisignano. Gold and Strand were named in a singular criminal complaint and each charged with entering a restricted building or grounds, and violent entry and disorderly conduct. Gold was released on $15,000 bail last week and placed on home detention while court hearings proceed. She is expected to appear in court today, Jan. 28, via videoconference. Strand was also released last week, but there were no further details about further court hearings.

The FBI and U.S. Department of Justice are still seeking tips about the insurrection at the U.S. Capitol. Anyone with tips can provide information by calling (800)CALLFBI, or the Los Angeles FBI Field Office at (310)477-6565.