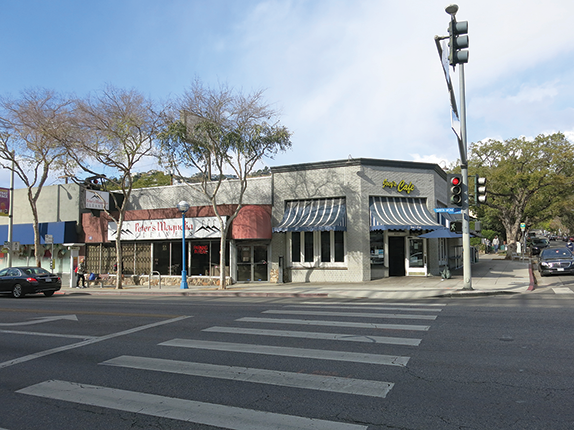 In moving forward with a plan to redevelop city-owned properties, Councilman John D’Amico suggested relocating Joey’s Café on Santa Monica Boulevard across the street to the ground floor of City Hall. (photo by Cameron Kiszla)

The future of city-owned properties was at the forefront of the most recent West Hollywood City Council meeting on Jan. 19 at which council members voiced support for developing the city’s underutilized properties.

“We have some very unique opportunities,” Mayor Lindsey Horvath said. “We have an urgent, pressing need for housing, to address homelessness services and needs in our community. These issues are contributing to inequity issues that are constantly part of our conversation now and the best way that we can address them is to take action swiftly.”

In addition to these properties, staff is evaluating the acquisition of other properties which align with the city’s goals and needs.

“Essentially, it’s housing, more housing, type of housing, any type of economic return to the city for the parcels, and how better to provide city services on some of those parcels,” League said.

The council members underscored that the properties could be developed to provide long-term revenue streams for the city.

In moving forward with the item, the council directed staff to engage the Urban Land Institute Los Angeles for guidance, but advocated that city staff take the lead in ultimately determining the best development strategies.

Mayor Pro Tempore Lauren Meister clarified that while it was “great” to look to the ULI for brainstorming and inspiration, the institute’s suggestions would not be “the final word” as to what happens in the city. She also asked that staff bring in an environmental consultant with a specialization in energy and climate to help create potential solutions for the properties.

Councilwoman Sepi Shyne further advocated that the city bring in an environmental expert.

“We have nine years until all [new] commercial buildings [constructed] have to be zero-net [energy] in California,” she said. “I would like us to get ahead of that curve and be a pioneer leader in the fight against climate change. I think we have an opportunity to do that with at least one or more of our city-owned properties that we’re going to be developing”

Shyne underscored the community’s need for affordable housing and advocated ensuring that the city pursues that avenue while realizing a good rate of return.

“I think the intent is there, but I want to make sure it is there,” she said.

Council members said it was critical that community engagement occur throughout the development process in order to ensure that resident voices are heard and become a part of the evaluation process.

During public comment, Jonah Breslau, a research analyst at the Los Angeles Alliance for a New Economy, advocated that the city maintain ownership of the land in order to retain control over the site.

League clarified that the city’s “goal is to not sell any of the properties.” Rather, he said the city planned to either lease the parcels or enter into public-private development partnerships.

Councilman John Erickson further underscored that the city’s intent was not to “give away” any public land.

“I think it’s going to be very important that our community has a robust input for how we can look at these parcels as we continue to push them out,” he said. “Obviously when we look at a number of them, we see the hopes for the future.”

League noted that the Santa Monica Boulevard property across the street from City Hall was challenged by the fact that its occupants all held leases, including Joey’s Café, which currently has a lease with the city that runs through 2032. He said it was “problematic” to immediately move forward with that property’s redevelopment as it would require the city to renegotiate the lease terms.

Councilman John D’Amico voiced his opposition to the city allowing such a large property to remain underutilized for the next decade. He urged staff to explore the possibility of leasing the ground floor of City Hall for other purposes in light of the fact that many people have transitioned to working from home as a result of the pandemic. He said if the suggestion was favorable, Joey’s Café could potentially move to the ground floor of City Hall.

“I can’t think of another city … that has a major piece of property across from its City Hall,” he said. “We have … these incredible opportunities … and we can rewrite the future history of our city by doing something.”

City Manager Paul Arevalo assured the council that the current leases, albeit “complicated,” would not be the driving factor on any of the projects.

“What we’re going to design is going to be something really special and something that we’ll all be proud of for the city,” he said.

Arevalo supported D’Amico’s suggestion to utilize portions of City Hall not purely for city operations, calling it a “great” one.

“The hybrid work environment is here to stay,” he said. “I do think we need to be creative and flexible.”

With its unanimous vote, the council also authorized staff to proceed with a feasibility analysis for a housing and services center for people experiencing homelessness.

Meister advocated that staff reach out to the county and Metro to see if it was possible to use portions of the Metro site on San Vicente Boulevard, namely its outdoor parking lot, to be developed to help with the city’s housing crisis.

“We are currently … spending so much money on outreach, social services, rehab and trying to find housing .. and also helping people who are at the brink of losing housing, we are trying to help them stay in their housing,” Meister said.

Staff is expected to issue a request for proposals within the next 90 days. The RFP will center around the feasibility of locating a combined housing and services facility in West Hollywood to serve people experiencing homelessness with $300,000 in Measure H funds. 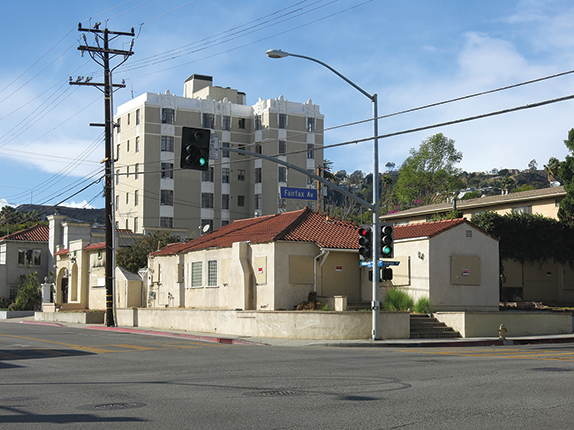 Some vcant buildings in West Hollywood have created issues for the city, officials said. (photo by Cameron Kiszla)

Following discussion on how the city might best utilize the properties that it owns, the council turned its attention to privately held vacant properties.

D’Amico advocated that the city expeditiously move ahead with dealing with the “worst” properties, particularly those that have homeless people living in them with no running water and no electricity. He characterized such conditions as “unreasonable and unsafe.”

“Boarded-up buildings in our neighborhoods that have people living in them, that’s just not safe,” he said. “And the property owners, I think, have to come up with better responses than having the city take care of it.”

“I and the residents of our city are bearing the burden of a person who doesn’t live here, bought the property ages ago [and] refuses to keep it up, when we could be doing things that this city actually needs, developing the property to meet the needs of our city, developing it for housing,” Erickson added.

West Hollywood Chamber of Commerce President and CEO Genevieve Morrill spoke out against levying the fees at this time, noting that several owners had reached out to her to share their concerns.

“It is a very different world today than when the ordinance went into effect in 2020,” she said. “It just seems unreasonable at this time that we’re putting resources into getting money from landlords who desperately want to rent.”

The implementation of the program was delayed due to the coronavirus pandemic, which charged the city’s code enforcement officers with enforcing the county’s public health orders. However, the council made clear that they were supportive in moving forward to deal with the most problematic properties. Initial inspections are anticipated to begin in February.

“We need to do whatever we have to do to get these landlords to take care of these properties,” Meister said.