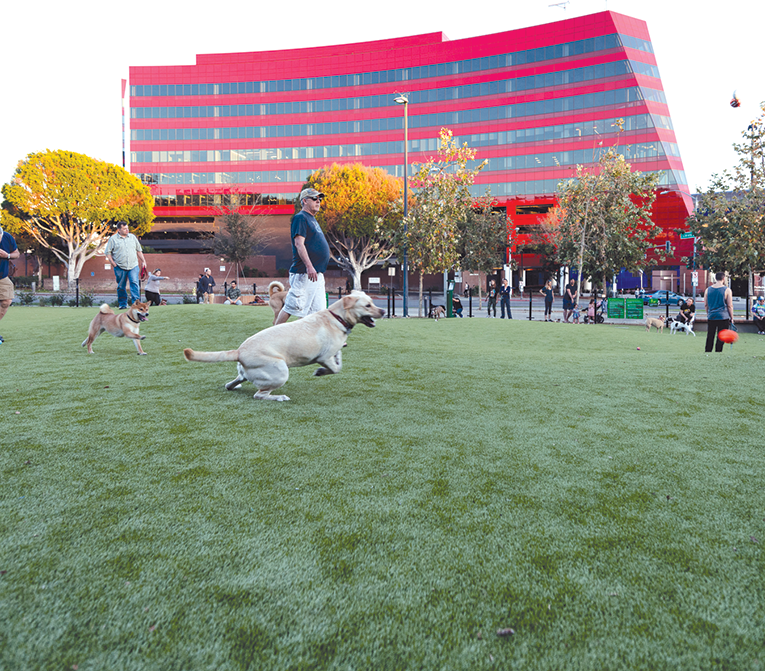 West Hollywood pups will soon have an opportunity to frolic freely in a new off-leash dog play area in Plummer Park following a unanimous vote by the City Council.

The council approved the preliminary plan for a pilot program on Jan. 19 as part of the city’s long-term plans to redevelop Plummer Park. Staff will need to return to council with a proposal that includes a site plan and budget for final consideration.

“So many people during the pandemic and the stay-at-home order have been adopting dogs and they have become more important in our lives than they ever were,”  Mayor Pro Tempore Lauren Meister said. “The idea is to try to do something for people during the pandemic that they’ll enjoy and it’s outside and people can be out there with their masks socializing with their dogs.”

Meister characterized the park as a backyard for nearby residents, most of whom live in apartments. She said that many people already allowed their dogs to use the park off-leash, despite it being illegal.

“I just really thought it was important to give [residents] a place to go socialize with their dogs and for their dogs to socialize in a safe environment where it would be legal to take your dog off leash,” she added.

Once established, the new off-leash play area in Plummer Park would become the city’s third dog park – and the only one on the east side. Both the West Hollywood Park Dog Park on San Vicente Boulevard and the William S. Hart Dog Park on De Longpre Avenue offer off-leash spaces for canines to play.

Meister estimated that the city would move forward in creating the pilot in the next several months.

“Given the density of West Hollywood and the limited amount of open space, dog parks are an important public benefit for community members and their companion animals,” the staff report reads. “Companion animals provide not only companionship, but emotional support which leads to reduced stress levels and positive emotional development. There is evidence that suggests that attachment to animals is good for human health and even helps build community.” 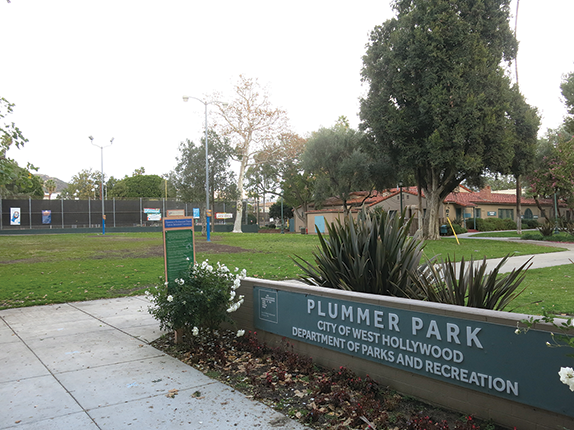 West Hollywood will pilot an off-leash dog area within Plummer Park in the coming months. (photo by Cameron Kiszla)

Since 2017, the city has been working to re-envision the park through a series of community workshops and facilitated discussions.

“Throughout these outreach efforts, community members showed a strong interest in the inclusion of a dog park,” the staff report reads. “The existing dog parks are extremely popular among residents and visitors, and provide an important benefit for community members to exercise and socialize with their companion animals in green, open space.”

Possible locations for the Plummer Park pilot include an area near the tennis courts along Vista Street or directly south of the community center adjacent to Santa Monica Boulevard. Construction costs are estimated to range from $100,000 to $250,000 depending on the site selected, plus an estimated $50,000 to $200,000 if an environmental analysis is necessary. Ongoing maintenance and service for the dog park is estimated at $4,000 per month.

Meister emphasized that the pilot would be an opportunity to see what worked as the city moves forward in establishing a permanent off-leash dog play area at Plummer Park.

According to the staff report, discussions regarding the redevelopment of Plummer Park have been less of a priority for the city while construction continues at the West Hollywood Aquatic and Recreation Center. However, the community engagement process is expected to resume later this year. Once it does, the report estimated that it could take up to a year before construction to redevelop the park begins.

Councilman John Erickson, the only member of the City Council who lives on the east side of the city, said he was particularly gratified about moving forward on plans to create an off-leash area in Plummer Park.

“Our continued improvements and access to Plummer Park, which is both historic and such a community park, will be a great benefit for the community over here where we have many dog owners and people not wanting to go across town to go to [a] dog park,” he said. “It’s perfect and it’s a great opportunity to provide this resource to our residents over here who live east of Fairfax.”

Erickson added that he knew his dog Winnie would be “very happy” to play in the forthcoming dog park.