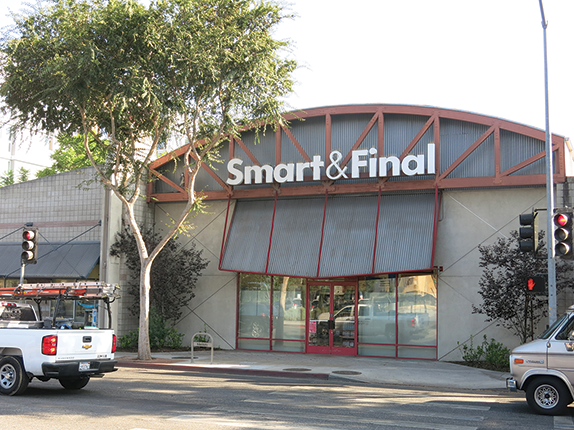 West Hollywood grocery stores may soon have to pay their employees an additional $5 per hour in hazard pay. (photo by Cameron Kiszla)

The West Hollywood City Council may require an additional $5 per hour for grocery store workers in hazard pay on top of their standard wages.

On Jan. 19, the council began the process, directing the city attorney to draft an ordinance that would require all grocery stores in the city pay their employees an additional $5 per hour until the pandemic-related emergency ends or 120 days, whichever is longer.

The council’s unanimous decision was made as part of the consent calendar, though Councilman John D’Amico made clear his support for the measure, which would apply to grocery store chains with more than 300 employees nationally and 10 employees per store, during the meeting.

“I support this item, I support what we’re trying to do … Grocery store employees, I believe, they are some of the unsung heroes of this epidemic. They should be, they must be, compensated,” D’Amico said.

In an interview, Mayor Lindsey Horvath added that some grocery stores have been sites of COVID-19 infections.

“The frontline workers there are putting themselves in harm’s way to ensure that we’re able to access those essential goods and food that we need. I’m grateful for their work, and they deserve to be rewarded for the risk that they’re taking to keep us fed,” she said.

During the meeting, however, the West Hollywood Chamber of Commerce made clear its opposition to the hazard pay ordinance. Among the concerns raised by the chamber’s President and CEO Genevieve Morrill and Chair Nick Rimedio were that local governments could be overstepping their role by directing private businesses to pay their employees more.

West Hollywood is not alone in considering or granting additional pay for grocery store workers. As the city staff report noted, several of the chains offered an additional $2 or $4 per hour in “hero pay” during the beginning of the pandemic. Though those raises have lapsed, nearby local governments are working to put in place their own hazard pay rules, including $5 per hour in Los Angeles, $4 per hour in Long Beach and $5 per hour in unincorporated Los Angeles County.

If the county’s ordinance is adopted, West Hollywood will seek to be included, according to the city staff report, and if that is not possible, the West Hollywood City Attorney will return with a city-specific draft ordinance for consideration in February.

Rimedio and Morrill also expressed concern about the financial burden on grocery stores.

“It could drive business away from West Hollywood, and that’s not what we need. The thought here is well-intended, and I know our council members are concerned for the safety and welfare of our workers, as well as the people who are patronizing their stores, but the great concern remains,” Rimedio said.

In an interview, Morrill said grocery stores could likely not afford the hazard pay for all of their employees and instead suggested the city could work with businesses to create a “fund for people who are unemployed and have families to feed,” as well as continue working to help businesses reopen safely.

“Just think about the math; $5 per hour per worker is about $10,000 more per employee,” Morrill said. “What does that do to a business that has a very slim profit margin, which grocery stores do? They have to lay off their staff, pull back on the services they provide, raise prices, all of these things impact us in the bottom line as the consumer and the livelihood of their workforce.”

Horvath said the grocery store industry has avoided much of the downturn that hit so many other sectors of the economy, adding that “we have not seen any evidence that suggests that grocery stores will have to lay off workers.”

“In fact, they’ve had to bring back more workers to take care of the duties and responsibilities that exist,” Horvath said. “We’ve required in West Hollywood that grocery stores place an employee at the entrance to ensure safety proctors are followed. I don’t think grocery stores are at risk of losing any of their workers. We need to be sure that we’re protecting our workers, as well as the people who are coming to buy groceries.”