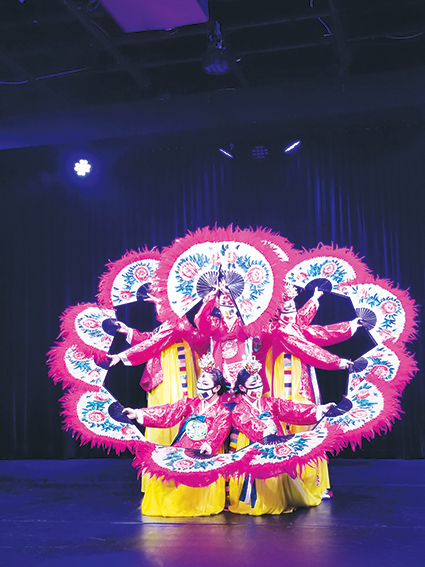 The Korean fan dance is one of the most popular traditional dances of the country. (photo courtesy of the Korean Cultural Center Los Angeles)

The performance will feature various Korean traditional dances like the fan dance (Buchaechum), the dance of untying evil spirits (Salpuri), the monk dance (Seungmu) and the three drum dance (Samgomu).

The fan dance is a more modernized style of Korean traditional dance. Similar to many of Korean cultures’ origins, the dance is also influenced from Shamanistic dance movements and music rhythms. The costumes, fans, choreography and music all come together to create the image of flowers and butterflies in spring.

The Salpuri is considered one of the oldest preserved Korean traditional dances. There are many different interpretations of the meaning behind this dance, but the most widely known description of this dance is that it is the queen’s dance and is believed that the queen, dressed in all white, uses one white cloth to dance away her sorrows. Salpuri means the act of washing away sorrows and ridding oneself of left behind grievances and regrets. Salpuri is considered one of the most advanced Korean traditional dances.

The monk dance is another considered to be one of the more advanced in Korean traditional dance. The dance is usually performed as a solo with one big drum. The influence of Seungmu is controversial. Some say the dance was derived from shamanism with the use of shamanistic costumes. Others believe this dance originated from a Buddhist ritual dance. It is said to have been prohibited during the Joseon Dynasty era due to the spiritual origin of the dance.

JinSae Choom, which started from celebratory court banquets during the Korean dynasties, was performed in ritual ceremonies to pray for national fortunes, longevity and prosperity, as well as for bountiful harvest for the people. It is the only dance that contains a combination of royal court dance styles with conventional shamanistic dance movements.

The three drum dance is usually performed by a group of three to as many as 20 dancers and requires much more teamwork and synchronicity.

“We hope that you will have a wonderful time and enjoy our concert. Through this ‘Virtual Ari Project’ concert, the audience will be able to witness sophisticated Korean dance performances such as ‘Seungmu, 27th Important Intangible Cultural Property’ and ‘Salpuri Dance, 97th Important Intangible Cultural Property’. I’m sure that the audience will be deeply touched by [the] diverse array of traditional Korean music and dances,” KCCLA Director Wijin Park said.

A few days before the dance performance, on Friday, Jan. 22, at 4 p.m., KCCLA will present an online lecture, “Korean Sensibility and the Double Reed in Korean Film Music.”