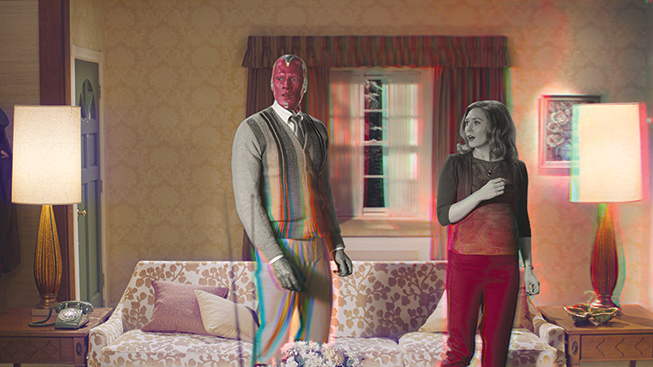 Since the early 2000s, a Marvel film has always kicked off the summer movie season, even pre-Marvel Studios. Not in 2020. “Black Widow” got delayed a year and two other planned features for the Marvel Cinematic Universe joined the spy thriller in limbo. So too vanished the Disney+ series “The Falcon and the Winter Soldier.”

With the exception of “Agents of S.H.I.E.L.D.,” completing the saga of Agent Coulson (Clark Gregg) revived following the events of 2012’s “The Avengers,” the year went without a blockbusting tentpole from the most popular superhero franchise.

This all makes the new series “WandaVision” all the more interesting. It doesn’t feel like business as usual. To start, trailers present something more like FX’s “Legion,” a psychological head spinner. The MCU doesn’t roll that way, often favoring more universal appeal with very little aesthetic flair.

This clearly bodes well at the box office, but longtime fans and plenty of critics – and combos of both – crave something more. Must superheroes always encounter single-minded villains trying to destroy the Earth, reality, galaxy or universe?

Cue “WandaVision” as a peculiar homage to TV history in the first two episodes on Disney+ now. Prepare for a couple forays into the golden age of sitcoms. The pilot channels some “I Love Lucy” vibes with Wanda Maximoff (Elizabeth Olsen), aka the Scarlet Witch, and Vision (Paul Bettany), aka Tony Stark’s former operating system merged with an Infinity Stone, residing in a suburb.

Their powers remain intact, though their neighbors remain in the dark (the protagonists too, much of the time). Vision can fly and dematerialize, while Wanda’s powers remain a bit in flux, unfolding more with each episode. The product of Hydra experiments (there’s a wink to that in the first episode, too), she always remained one of the most powerful Avengers, though the films never truly explored her full capabilities or even established any parameters.

For that matter, the relationship between Wanda and Vision transpired between films, rarely during them. They met in “Avengers: Age of Ultron,” shared some affection for each other in “Captain America: Civil War” and appeared as a fully established couple in “Avengers: Infinity War,” the last film they appeared in together.

So “WandaVision” fills in several gaps: exploring the pair’s relationship, defining Wanda’s powers and establishing where in the MCU timeline all of this occurs, especially considering the outcome of “Avengers: Endgame.”

Just discussing Marvel chronology or trying to locate easter eggs is splendid, but “WandaVision” better move things along. After two episodes, each around 20 to 30 minutes, the laugh-track schtick wears out its welcome (it comes to a definitive end, though), and no amount of “Bewitched” or “Full House” references make it completely enjoyable.

Why watch? There’s a central mystery. Wanda and Vision (or maybe just one of them) seem to be stuck in a simulation (perhaps VR or created through someone’s superpowers). This alone might be pulled directly from Marvel Comics when the Scarlet Witch loses control of her powers and bends reality, but film and now TV counterparts oft go their own way.

Even if the sitcom throwback doesn’t entirely work, a desire for answers and a couple new faces help fill the time. First, there’s next-door neighbor Agnes (Kathryn Hahn), who serves as Wanda’s guide through suburban purgatory. Maybe she’s a familiar face from the Marvel canon. Not sure.

Then comes Geraldine (Teyonah Parris), the only other resident of Pleasantville who doesn’t find everything five-by-five. Her character has another name, but that’s a spoiler.

As for the leading super-couple, their chemistry works quite well. Olsen’s Wanda in black-and-white land drops her character’s Eastern European accent in favor of something more gumshoe. Bettany, on the other hand, remains the same. That’s OK. This show is more interested in exploring Wanda anyways, especially setting her character up for an eventual appearance in the next “Doctor Strange” flick.

If for no other reason, “WandaVision” proves the MCU can do something new, draw upon comic books’ diverse aesthetic offerings. Things might start slow, presenting only a few clues in each episode, but the coming­­ seven (the next dropping tomorrow) can go anywhere, if the series takes seriously Wanda’s awesome powers.