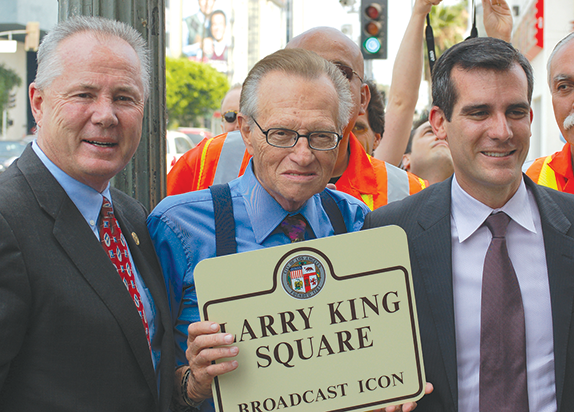 Longtime CNN broadcaster Larry King was joined by then-Los Angeles City Councilmen Tom LaBonge, left, and Eric Garcetti for the dedication of Larry King Square in Hollywood in this photograph from the July 17, 2008, issue of the Park Labrea News and Beverly Press. King died on Jan. 23 at the age of 87. The city of Los Angeles dedicated the intersection of Sunset and Cahuenga boulevards as Larry King Square on July 10, 2008, in recognition of King’s decades of work as a broadcaster and talk show host. His “Larry King Live” show ended in 2010 after 25 years on CNN. The square is located outside the CNN building at 6430 Sunset Blvd., with a special sign noting the designation at the southwest corner of the intersection.