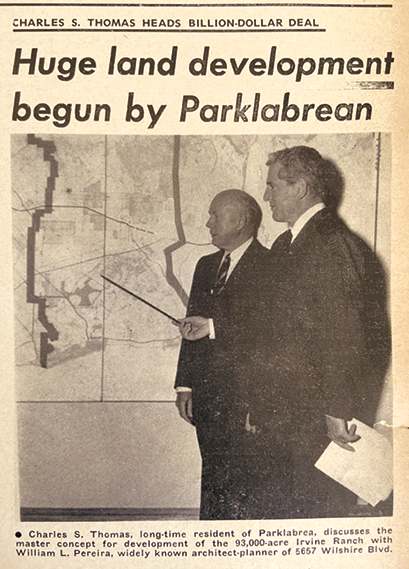 Park La Brea resident Charles S. Thomas and architect William Pereira discussed plans for a massive housing project on what was then known as the Irvine Ranch in Orange County in this photograph from the Dec. 15, 1960, issue of the Park Labrea News. Thomas had recently completed a reorganization of Trans World Airlines for Howard Hughes at the time and had taken a position as head of the Irvine Company, which was planning the Orange County development. Pereira had recently designed the 5667 Wilshire Blvd. building in the Miracle Mile and was helping Thompson with the new housing project. Pereira later went on to design local landmarks such as CBS Television City and the Los Angeles County Museum of Art. Thompson was planning to build housing on 93,000 acres of open land, which later became the city of Irvine upon its incorporation in 1971. The “billion-dollar deal,” as the accompanying article read, was the largest urban housing development to date in the United States.