The Music Center and Dublab launch ‘A Quiet Scene’ 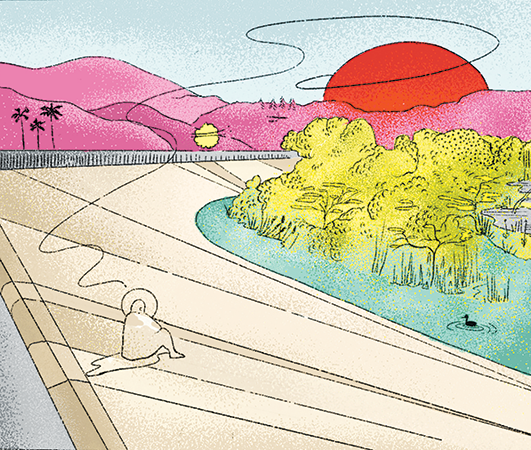 “A Quiet Scene: L.A.” is a film competition and screening project inspired by the album “Luminous” by Roger and Brian Eno. (artwork by Radha Vishnubhotla)

The Music Center and nonprofit radio station Dublab have partnered to offer “A Quiet Scene: L.A.,” a free film competition and screening initiative. Through Feb. 21, the public is invited to submit a short original film that is an authentic reflection of Los Angeles during current times. The program is open to all ages, although minors will need parental consent to submit an entry. Each short film must be paired with – and filmed in duration to – one of the seven tracks featured on the EP, “Luminous,” composed by pioneering ambient music artists and brothers, Roger and Brian Eno, and released by Deutsche Grammophon. The recent album is a follow-up to the duo’s lauded debut album, “Mixing Colours.”

Tracks on “Luminous” are “Moss,” “Violet,” “Manganese,” “Vermillion,” “Marble,” “Pewter­­­” and “Malachite.” Interested filmmakers may submit their work on filmfreeway.com/aquietscenela through Sunday, Feb. 21, before midnight.

Film submissions should be scored to a single “Luminous” track and will be evaluated based on “a quiet scene” interpretation of Los Angeles, reflection of current times and creativity and originality of the work. Production quality and value will also be taken into consideration.

Awardees of “official selections” and “best films” will be notified on Tuesday, March 16, and their films will be screened publicly on the large LED screens on Jerry Moss Plaza at the Music Center from March 20 to April 18. In addition to the outdoor exhibition, the best films will also be featured for viewing on the Music Center Offstage, the performing arts center’s virtual platform. The Music Center will further extend the project by partnering with ArtworxL.A. to engage students as they learn about various approaches to combining sound and imagery, culminating in their own short film projects inspired by the creative process of “Mixing Colours.”

“‘A Quiet Scene: L.A.’ brings people together through the experience of listening, creating and enjoying films that complement the contemplative tracks of ‘Luminous,’ and uplifts audiences through the arts,” Music Center president and CEO Rachel Moore said. “As the world comes to terms with our common experience of isolation and self-reflection over the last year, arts experiences are a healing and unifying remedy.

“‘A Quiet Scene’ will provide the opportunity for Los Angeles artists [and] filmmakers to collaborate and be part of a body of work originated by the Eno brothers in its original form as ‘Mixing Colours.’ With the idea of blurring the lines between audience and artists, ‘A Quiet Scene: L.A.’ aims to be inclusive and interactive, providing a sense of comfort and enrichment,” added Alejandro Cohen, director at Dublab.

For more information, plus complete terms and conditions for the contest, vist musiccenter.org/aquietscenela.

Join FIDM and Mona May in online talk