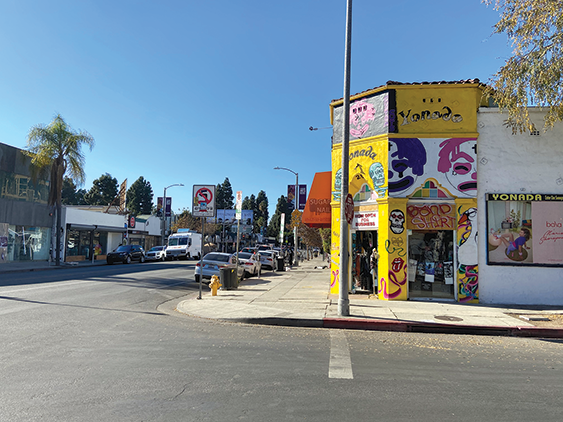 A car-to-car shooting on Melrose Avenue left a man dead on Jan. 12. Another man was killed at Melrose and Stanley avenues on Dec. 15. (photo by Edwin Folven)

A West Hollywood man was arrested on Jan. 12 for a car-to-car shooting on Melrose Avenue earlier that day that left a 19-year-old man dead, police said.

The suspect, Robert Antrel Love, 27, was taken into custody at approximately 10:40 p.m. in the 900 block of Westmount Drive in West Hollywood and booked for murder. The shooting occurred shortly after 2 p.m. near Melrose and Sierra Bonita avenues.

Police reported that a white SUV with tinted windows drove up to a vehicle occupied by the victim, a verbal altercation occurred and the victim was shot. The two vehicles drove away in different directions, with the suspect’s vehicle traveling westbound on Melrose, and the victims’ vehicle heading eastbound, said Capt. Shannon Paulson, of the LAPD’s Wilshire Division.

Witnesses called 911. Officers arrived at Melrose and Sierra Bonita avenues a short time later and learned about a gunshot victim at a nearby hospital. The victim, who authorities have not identified, was pronounced dead at the hospital.

Detectives from the LAPD’s West Bureau Homicide Unit were assigned to the investigation and after canvassing the surrounding area, located a vehicle matching the description of the SUV involved in the shooting on Westmount Drive in West Hollywood. Undercover officers conducted surveillance and detained two men when they exited a residence. Officers served a search warrant and later arrested Love for the alleged crime, police said. The case will be presented to the Los Angeles County District Attorney’s Office for consideration of a murder charge.

Police did not offer a motive for the shooting. It occurred two blocks away from another unsolved homicide on Dec. 15 near Melrose and Stanley avenues. In that case, a 28-year-old man from Akron, Ohio, was shot and killed. Authorities identified him as Devonte Clepper. The investigation remains open and no motive has been established. Police are searching for a Black man who witnesses said fled on foot after that shooting.

Melrose District resident Peter Nichols, who co-founded the Melrose Action Neighborhood Watch more than two decades ago, said he heard a shot shortly after 2 p.m. on Tuesday and feared the worst. He learned about the murder later that evening when Paulson issued a community bulletin. Police announced the arrest on Wednesday morning.

“I thought, what the heck is going on?,” Nichols said. “I’m grateful this came to a speedy end. It’s the latest in a long string of violent crimes that have occurred in this neighborhood.”

Nichols said he participated in a conference call on Tuesday night with other members of the neighborhood watch’s board, and they all agreed that more needs to be done to fight crime in the Melrose District. He said the district has experienced more crime over the past several years and many people are fearful. Nichols credited the police department with attempting to prevent crime, but more needs to be done by the city and local organizations to improve the area. He criticized the Melrose Avenue Business Improvement District for not doing enough to make the district better.

“We came together to talk about this violence that is occurring, particularly in the Melrose-Fairfax District, what’s behind it and what we can do about it,” Nichols said. “We came to the same conclusion that this is not a police problem, per se, but the real problem is the management of the street. It’s very disappointing there is an overall sense that the street continues to spiral downward. We believe this is something that started several years ago, not just during the pandemic. People are moving out because they just don’t feel safe.”

Paulson said police have deployed more resources to the area in response to the homicide in December, including foot and bicycle patrols, undercover operations and additional vehicle patrols, when those resources are available. She said violent crime is taken very seriously and officers are attempting to prevent it from occurring throughout the division.

Los Angeles City Councilman Paul Koretz, 5th District, also said he is concerned about violent crime in the Melrose District and he is working with police to address the situation.

“Throughout the day [on Jan. 12], my Director of Public Safety Gregory Martayan remained in contact with LAPD Wilshire Division Captain Shannon Paulson and relayed my full support for her team as they investigated this horrendous crime,” Koretz said. “In addition, I have made a request for extra patrol in the region, including foot beats, which the captain has assured us will be implemented regularly as resources are available. Public safety remains our highest priority.”

The murder on Jan. 12 occurred on the same day that Koretz introduced a motion calling on the LAPD to report to the City Council on plans to address a rise in violent crime citywide.

“For the first time since 2009, there were over 300 homicides in the city (in 2020), and gun crimes are at levels not seen in years. While crime rates are nowhere near where they were in the 1980s and 1990s, these increases are troubling and have erased years of progress by the police department and its partners in crime reduction,” the motion read. “2020 was an anomaly in many ways, and it may be that this crime increase was driven by the pandemic and its impacts on the economy and society. Whatever the cause of this crime increase, the LAPD must do whatever it can to address it and ensure that 2021 is a much safer year for residents and visitors in the city.”

“This area has gone through too much in the last six months,” He said. “It’s too much for many people to handle.”

Anyone with further information about the homicides is urged to call detectives at (213)382-9470.