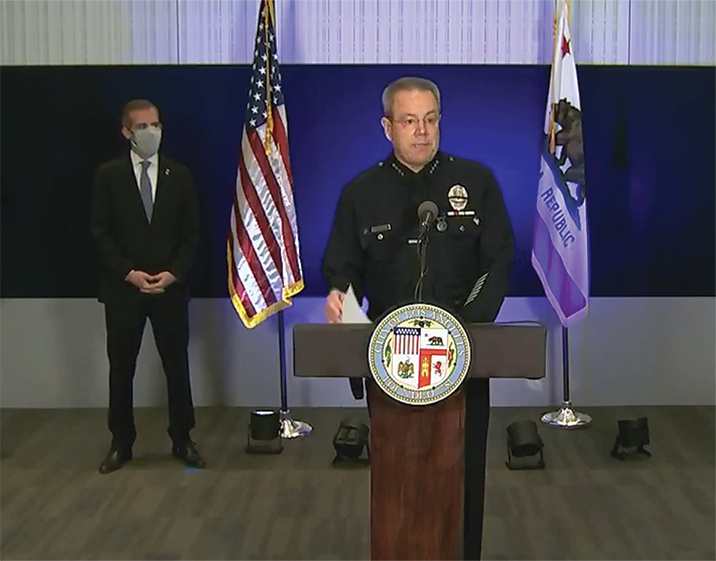 LAPD Chief Michel Moore outlined steps the department is taking to reduce crime during a virtual press conference on Jan. 25. He was joined by Los Angeles Mayor Eric Garcetti. (photo courtesy of the LAPD)

The numbers painted a sobering picture as Los Angeles Mayor Eric Garcetti and Los Angeles Police Department Chief Michel Moore outlined 2020 crime statistics on Jan. 25 and discussed plans for addressing the increases in the coming year. Aggravated assaults and auto thefts were also up; however, every other category was down, which was reason for some optimism, city officials said. But the increase in homicides and shootings is troubling and will be a focus for the department, they said.

“This has been a year unlike any other, and we know that this year, in so many ways, has been an anomaly, and so there’s a big star on everything that we talk about here in that we don’t know if this year will just be a single year and it’s good news and bad news that’s an outlier because of the extraordinary circumstances we are all living through,” Garcetti said. “But there’s another part of the story, the numbers that are trending in the wrong direction. We saw an increase last year in two critical categories, with homicides up by 36.2% and victims shot by 41.4%, and while it doesn’t change how serious and sobering these numbers are, L.A. isn’t some sort of outlier. We’re part of a clear national trend. We can’t take steps back. We have to make sure that [last] year was an anomaly and not a trend.”

Moore said the LAPD will continue to operate with a focus on community service and crime reduction, as well as transparency and equity. The pandemic has impacted policing in many ways, but the department remains committed to the job of maintaining public safety and reducing crime, he said.

“Our city, like others across the nation, experienced a troubling surge in homicides and shooting violence, with the highest concentration of that violence occurring in vulnerable communities. We saw increased street gang violence, with 55% of our homicides being gang-related and a year-over-year increase of 42% in gang homicides, and increased violence within our homeless community, with a year-over-year increase of 11% in violent crime and 65 victims who were experiencing homelessness lost to homicide, compared to 41 the year before,” Moore said. “Impacting these increases has been made harder by the pandemic and its impact on every social institution. The isolation, sense of hopelessness and inability to quell disputes and ready access to firearms, along with a justice system that has been severely impacted, has removed many levers that over the last decade have been effective in the reduction of homicides and shooting violence.”

Garcetti expressed sympathy for the families and reaffirmed the city’s responsibility to protect citizens and maintain public safety. He said there are many efforts underway such as community partnerships, youth development initiatives and gang reduction programs that show promise in reducing the rising numbers. He also stressed equity and fair treatment of all people as an important component of policing moving forward.

“It’s been a year that’s been filled with courage, generosity, when the spirit of this city shone bright, but it’s also been a year in which Angelenos challenged us, challenged us to look at public safety and to build on the leadership that we’ve had, [and] to demand more to make sure that we are truly protecting and serving,” Garcetti added.

Citywide, overall violent crime decreased by 4.7%, robberies were down 17% and property crimes decreased by 11.7%.

Garcetti cited programs aimed at helping reduce crime while providing a more equitable approach to the way people are treated. He said a new project that will dispatch mental health case workers to some 911 calls in which a police response may not be the best approach will be ready for implementation in the coming weeks. The mayor also stressed partnerships with the Los Angeles City Council and more community partnerships as being crucial to reducing crime.

In some locations in South Los Angeles and the San Fernando Valley impacted by gang-related crime, the city has implemented community partnerships in which officers and other public safety officials are ingrained in communities and spend time getting to know young people. Other efforts include creating more opportunities for community activity. The pandemic and stay-at-home orders have been particularly difficult for youth seeking an outlet for pent-up energy, authorities said.

Moore added the department will continue to reimagine policing efforts and community service in an effort to build public trust.

“As we move into 2021, we are committed to focusing our resources on reducing gun violence and continued community engagement in those neighborhoods most impacted by this senseless violence and loss of life,” Moore said. “We have realigned this organization to continue staffing in our [most affected] geographic areas as well as investigative units focused on gun violence. We are working with the U.S. attorney and district attorney and federal law enforcement partners to expand our resources and commitment to hold those accountable who commit violence, and also those responsible for putting the guns in people’s hands.”