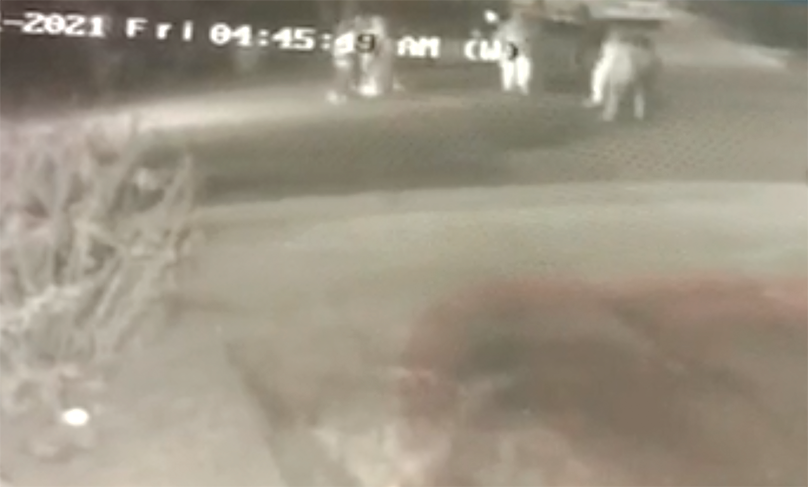 Grainy security camera video shows a crowd gathered in the street right before the shooting occurred. (photo courtesy of LAPD)

A shooting occurred on Jan. 1 outside an alleged short-term rental house in Beverly Grove. Activity at the home, reportedly used for illegal parties during the COVID-19 pandemic, renewed concerns among residents and law enforcement authorities.

Detectives are actively investigating the shooting at approximately 1:45 a.m. in the 6300 block of Maryland Drive. Officers received calls about shots being fired and when they arrived a short time later, found most of the people had fled the scene, said Capt. Shannon Paulson, commanding officer of the Los Angeles Police Department’s Wilshire Division. After a subsequent investigation, two male gunshot victims were located at separate hospitals. Both either drove themselves or were driven to the hospitals, Paulson said. They are expected to survive.

Due to the investigation, Paulson declined to provide any further details about a motive or who owns or was at the property when the shooting occurred. However, she said the residence is well-known to police. The house at 6347 Maryland Drive was at the center of numerous complaints earlier in 2020, Paulson said.

“This is [a short-term rental] where we have had numerous calls throughout the COVID-19 pandemic. It came onto our radar in April. It was mostly disruptive parties, people coming and going, loud noise that was disruptive to neighbors, music playing late into the night,” Paulson said. “We had worked with the City Attorney’s Office and worked with the property owner in an effort to gain voluntary compliance. It seemed to go quiet in August for a couple of months, but then we had the call about the shooting on Jan. 1.”

It was unclear whether specific action other than issuing warnings was taken previously against the property owner, but Paulson said “everything is on the table” now in terms of the department’s response to the problem. She plans to continue working with the City Attorney’s Office to address the issue. Los Angeles City Attorney’s Office spokesman Rob Wilcox confirmed prosecutors are involved.

“Our office is well aware of the incident and we are in close contact with the LAPD as it continues its investigation,” Wilcox said.

Residents of the neighborhood remain concerned that the problems will persist. Videos with audio from security cameras in the neighborhood captured the recent shooting, showing a chaotic scene with approximately 25 shots being fired and people screaming and running.

“This is a quiet neighborhood and this has to be addressed,” resident Sally Le Corvec said. “With shots being fired like that at 1:30 in the morning … it’s scary. This is absolutely outrageous and needs to stop.”

Anyone with information about the crime is urged to call the LAPD’s Wilshire Division at (213)922-8205.