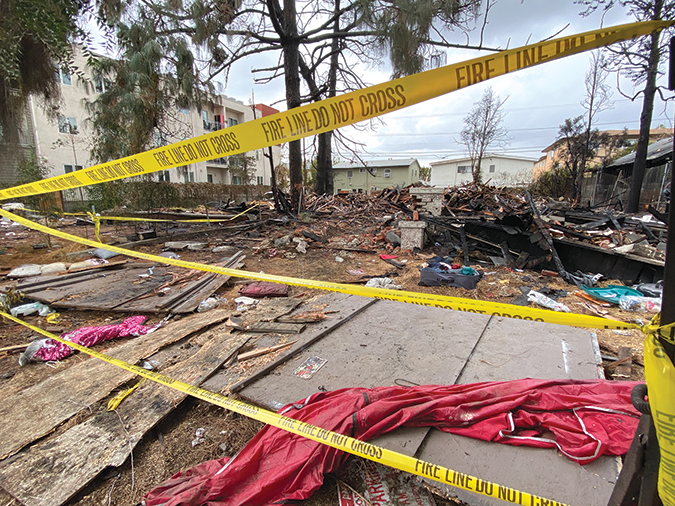 A firefighter and civilian were injured on Jan. 22 during a blaze at two neighboring vacant homes on Bronson Avenue in Hollywood. The Los Angeles Fire Department received a 911 call about the fire at 1245 N. Bronson Ave. at 9:08 a.m. Firefighters arrived to find a one-story vacant house on the property fully engulfed in flames, with the fire extending to a second vacant house to the north and a small guest house toward the rear of the property, LAFD spokesman Brian Humphrey said.

Flames had also spread to a balcony at an adjacent apartment building that was occupied. Firefighters located a male civilian in the apartment building suffering from burns to his arm and hand, and paramedics took him to a hospital in fair condition. The fire was extinguished at 9:47 a.m. A firefighter also sustained a minor injury but was assessed at the scene and did not require hospitalization, Humphrey said.

LAFD spokesman Nicholas Prange said the LAFD Arson Unit is investigating the cause and the case remains open. The buildings had been vacant, boarded up and fenced for nearly two years after being damaged by a previous fire on June 12, 2019. The cause of that fire is also unknown.

That was not a second fire. This fire was at least number 14, counting from December 2016. The civilian injured was my daughter. The guest house destroyed was where my 93-year-old mother lived. She is unable to walk and was pulled out of the burning house by some heroic neighbors.

The vacant property has been a threat, a hazard and an eyesore for years.
It has been bulldozed and good riddance, although the piles of wood still lying there two months later are still a danger.