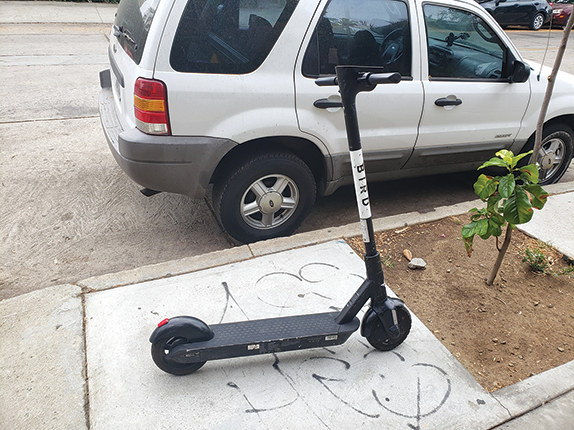 Bird is one of two e-scooter providers for West Hollywood’s pilot program. (photo by Cameron Kiszla)

The push to bring e-scooters to West Hollywood moved forward on Jan. 19, though one city commission pushed back on the pilot proposal.

The City Council unanimously approved an ordinance prohibiting e-scooters and e-bikes from riding on sidewalks at all times – they must operate in the street and in bike lanes, where available – and received an update on the city’s pilot program, which will include e-scooters from Lime and Bird and throttle-assisted e-bikes from Wheels. Representatives from another e-scooter company, Spin, spoke about their desire to join the pilot program during public comment.

When it launches, there will be 300 total devices in the pilot program – 100 from each provider – though West Hollywood is likely to approve 400 total devices, said Rachel Dimond, the city’s acting long range planning manager.

“We anticipate opening this up to additional providers,” Dimond said.

The program could see changes if there are problems with other providers or if other companies wish to join, Dimond said.

“The plan is to run [the pilot program] for 18 months and review at six-month intervals, but we can make that determination at any time throughout to remove any provider that’s not meeting our requirements,” Dimond said.

Not all feedback during public comment was positive, however. Tai Sunnanon, chair of the West Hollywood Public Facilities Commission, stated the commission’s opposition to allowing e-scooters in the city. Earlier this month, the commission voted unanimously to recommend against allowing the devices in West Hollywood, “particularly along Fountain Avenue, which is called ‘Fountain Freeway’ for a reason,” Sunnanon said.

Mayor Pro Tempore Lauren Meister addressed Sunnanon’s concerns specifically and how they relate to the city’s plan to create drop-off points for the devices. Unlike in Los Angeles, where the devices can be left on sidewalks and other public rights of way, West Hollywood’s pilot program includes corrals where the devices must be returned once a rider is done with their trip.

“A lot of this seemed to be focused on Fountain, and I just wanted to be sure that we were not going to have any corrals on Fountain,” Meister said.

Dimond confirmed that the majority of the city’s 16 corrals are planned for Santa Monica Boulevard, with the others on Sunset Boulevard, Melrose Avenue and Beverly Boulevard. Those locations were chosen based on “the top locations from the previous WeHo Pedals program,” Dimond said.

If the pilot program is successful and more corrals are needed, they could be placed on Fountain Avenue if it’s a popular route for e-scooter users – “We’re going to look at data of where people are riding,” Dimond said – but as things currently stand, “none are planned for Fountain.”

“It’s not necessarily a location that’s conducive for a station,” Dimond said.