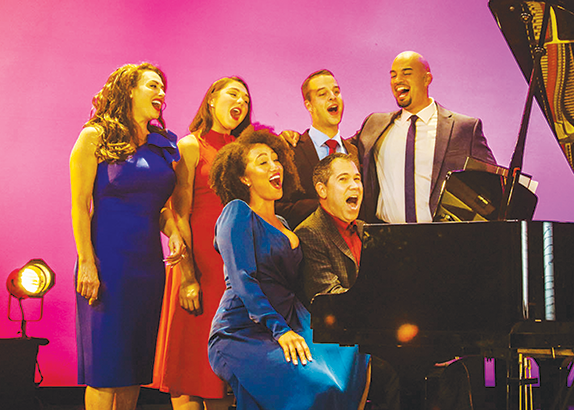 “You I Like: A Musical Celebration of Jerry Herman” opens at the Pasadena Playhouse on Jan. 10. (photo by Jeff Lorch)

Pasadena Playhouse announced that “You I Like: A Musical Celebration of Jerry Herman” will open on Jan. 10 at PlayhouseLive online. The upcoming virtual musical revue will honor the genius responsible for Broadway classics including “Mame,” “La Cage aux Folles” and “Hello, Dolly!” The online opening night will be a livestreamed event with special guests Bernadette Peters and David Hyde Pierce.

The production, conceived and music directed by Andy Einhorn, will mark the first theatrical tribute to Jerry Herman by a professional theater company since the passing of the Tony Award-winning Broadway legend one year ago.

“Jerry Herman’s songs have an optimism and joy that can’t be rivaled. After the challenges we’ve all faced over the past few months, I can’t think of a better way to kick off the new year,” Pasadena Playhouse Producing Artistic Director Danny Feldman said. “This love letter to Jerry is an entertaining celebration of his life and exploration of his legacy.”

The upcoming PlayhouseLive production features Einhorn on the piano with performances by Ashley Blanchet (“Frozen”), Nick Christopher (“Hamilton”), Lesli Margherita (“Matilda the Musical”), Andrea Ross (“The Sound of Music”) and Ryan Vona (“Once”). Einhorn’s many Broadway credits include his recent conducting of Bette Midler in the Tony Award-winning Broadway revival of Jerry Herman’s “Hello, Dolly!” for which he served as music director.

In the show, Einhorn explores themes that are commonly found in Herman’s work: love, family, home and optimism.

“These themes are who Jerry Herman was as both an artist and as a man,” Einhorn said. “Jerry Herman was joy personified. He wrote shows that sparked joy, brought out positivity in the face of adversity, granted his characters second chances, and reinforced the love of family and life. He left a piece of himself in everything he wrote, and may these treasures bring some joy and comfort to everyone during these uncertain and challenging times.”

Video-on-demand streaming of “You I Like: A Musical Celebration of Jerry Herman” will be available to rent on PlayhouseLive for $24.99 from Jan. 11 through Feb. 7.