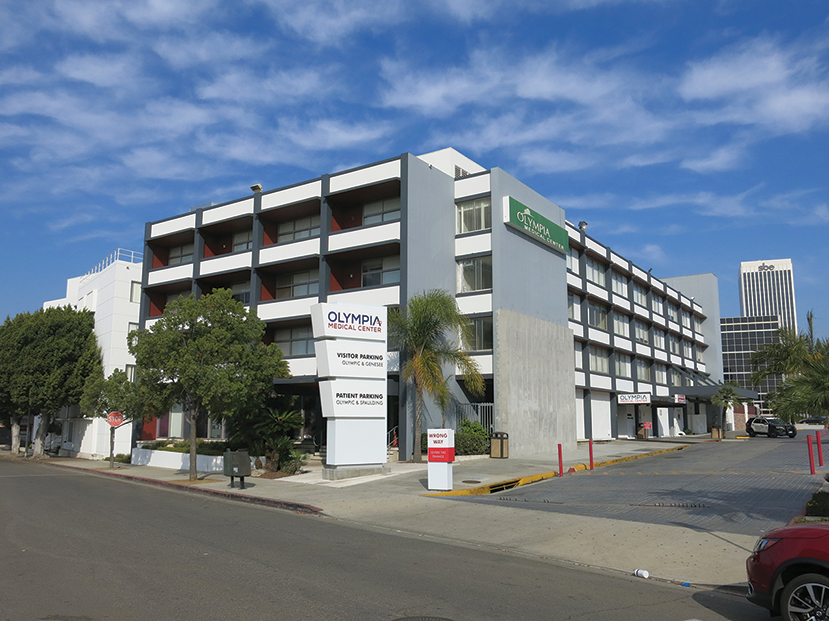 Olympia Medical Center could transition into mental health care facility after it was purchased by UCLA Health. (photo by Cameron Kiszla)

Olympia Medical Center, which has been serving the community since 1947, announced that it has been purchased by UCLA Health and will cease all operations by March 31.

The 204-bed hospital at 5900 Olympic Blvd. has been owned since 2014 by Alecto Healthcare Services, based in Irvine. The announcement about the closure was made in a Dec. 31 online posting on the medical center’s website. The posting did not mention a sale to UCLA Health. Instead, it stated that the closure was necessary to “allow for substantial renovations which will allow the Olympia Medical Center facility to better serve the health care needs of the community,” and “all patient care services” would be suspended “effective as of 11:59 p.m. on March 31.” Some unspecified medical services would end on Jan. 31, the posting read.

Requests for information about the closure to CEO Matt Williams were not answered by Olympia Medical Center. However, attorney Michael J. Sarrao, who represents the hospital’s ownership, provided a brief statement.

“Olympia Medical Center remains open and operating. Olympia has sold the real estate to UCLA Health. Questions about UCLA Health’s plans for the future should be directed to UCLA Health’s media relations team,” the statement from Sarrao read.

UCLA Health confirmed it has acquired the medical center and plans to renovate the campus near Olympic and San Vicente Boulevards.

“UCLA Health regularly considers property purchases and growth opportunities in the region that allow us to expand access to care for patients who need our services. One such opportunity arose recently with Olympia Medical Center of Los Angeles in Mid-Wilshire. The operators decided to sell the property and will be winding down their services over the next few months before closing the hospital,” read a statement provided by Elaine Schmidt, senior officer of media relations for UCLA Health. “This asset provides a much-needed future growth opportunity for UCLA Health and will allow us to expand services. To this end, in 2021, we will be launching the initial planning process for a major facility renovation on the former Olympia campus. This process will include leadership, faculty and staff. This purchase will provide UCLA Health with an additional campus and the potential to contribute significantly to community benefit needs. We look forward to sharing more information soon on this exciting opportunity to improve access to care in our community.”

UCLA Health provided no further information about what functions, specialized medical care or treatment will be offered at the new hospital, but some familiar with the plan have indicated that it may serve as a center for behavioral and mental health treatment.

The announcement caught many off-guard, including new Los Angeles City Councilwoman Nithya Raman, 4th District, who represents the neighborhood where the hospital is located.

“This is the first we’ve heard about the planned voluntary suspension of all patient care services at Olympia Medical Center on March 31, 2021. We’ve reached out to both Olympia Medical Center and UCLA Health, which has purchased the property, to discuss the matter, as well as the envisioned long-term use of the facility,” read a statement from Raman. “At a moment in which COVID-19 is surging and ICU capacity in hospitals is at zero, we agree that any reduction in overall emergency services capacity in Los Angeles is cause for concern, and we’ll be following up as we learn more.”

Others echoed worries about the impact of closing a hospital during the pandemic, including one of the region’s emergency departments. The Los Angeles County Department of Public Health reported Wednesday that medical centers are becoming overwhelmed countywide, with approximately 8,000 COVID-19 patients hospitalized. Olympia Medical Center is currently treating approximately 50 people with COVID-19. Plans have not been announced about what will happen to patients being treated at the hospital as operations wind down.

“Any hospital closing right now, I think that’s appalling. At the height of a pandemic that has us down to no emergency room beds and ICU beds, it doesn’t make any sense,” said Greg Goldin, president of the Miracle Mile Residential Association, which represents the neighborhood adjacent to the medical center. “Also, it seems like everyone is in the dark about what precisely is happening. Why the secrecy?”

Olympia Medical Center’s Dec. 31 online post said there would be a “separation” from 450 full- and part-time employees, raising further questions about the future of those health care professionals. Also uncertain are plans for the building on the north side of Olympic Boulevard that houses medical offices, including an office of APLA Health and Dr. Michael S. Gottlieb, a pioneer in the first treatments of HIV and AIDS.

Assemblyman Richard Bloom (D-Santa Monica), said he understands the need for more behavioral and mental health treatment, but he is also concerned about a hospital closing in the midst of a pandemic. Bloom said he only became aware of the sale over the holidays.

“My understanding is that Olympia had been on the market for the past year or so, and was looking for a buyer, so something was going to be in the offing. It’s also my understanding that UCLA intends to, for all intents and purposes, convert the use from a current acute care facility to a mental health care facility, and assuming that is ultimately what plays out long-term, I think that is extremely important. L.A. County has an extreme shortage of mental health care facilities. There is a lot of nuance to that that should be discussed in the future,” Bloom said. “I think the short-term implications are, where are we going to take up the loss of approximately 200 beds … what does that do to our ability to deliver health care, particularly in a local community, and given the fact that we are in the middle of a surge? The immediate answer to that question is that we need as many beds as possible and need all of the staffing that goes along with those beds. I am very concerned given the unpredictability of the surge and the progression of the pandemic itself. I am concerned we don’t get caught any more short-handed than we already are, and March may be the wrong time to be closing down this facility.”

Bloom said he plans to work with the California Department of Public Health to determine what options exist if pandemic-related necessity dictates that the hospital remain open.

“We are in the middle of a public health crisis where hospital beds are needed. I was contacted by the current property owners of Olympia last week and informed of the UCLA purchase,” Mitchell said. “I expressed my concern then that a hospital closing in 90 days during a pandemic was not wise.”

Many others in the community are also upset about what they said is a lack of transparency.

“This is bad news,” added Melrose area resident Peter Nichols. “Hasn’t this COVID-19 crisis taught us that we don’t have enough hospitals? It’s crazy. I don’t know what they are thinking.”

What I don’t understand is how any moral, ethical medical organization could even contemplate closing a hospital during an ongoing and expanding pandemic. Is it just a money grab? Is that more important to the board of directors than the health and lives of their patients? The regulators had better step in and stop this transaction it its tracks!