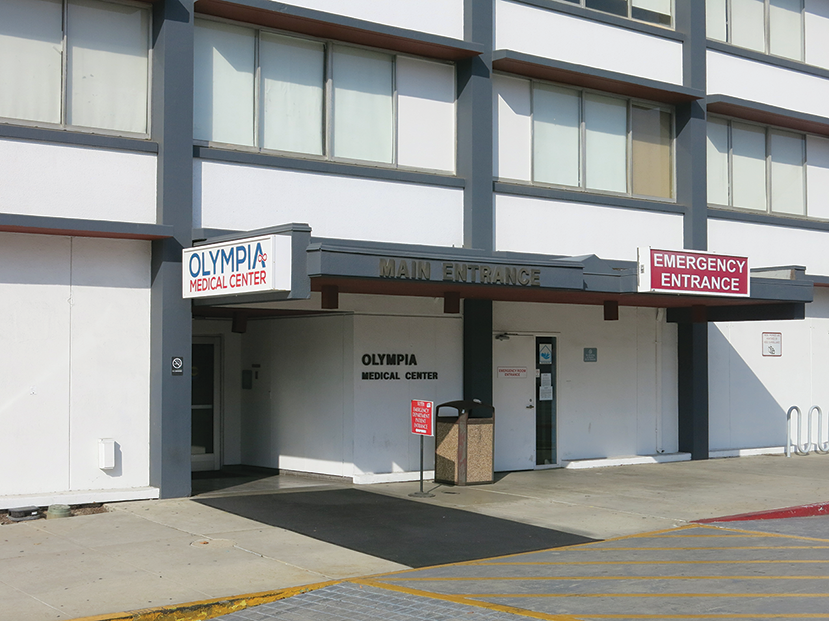 The future of Olympia Medical Center remains uncertain after it was announced on New Year’s Eve that the hospital would cease all operations after March 31. The hospital’s owner, Alecto Healthcare Services, has sold the property to UCLA Heath for an undisclosed amount and has not disclosed any further plans about its role in the medical center’s immediate future.

Nurses from Olympia Medical Center held a virtual protest on Jan. 18, denouncing Alecto’s decision to close the hospital, particularly during a surge in the COVID-19 pandemic. The Dec. 31 announcement surprised the approximately 450 staff members, who are now scrambling to find other positions, some said. 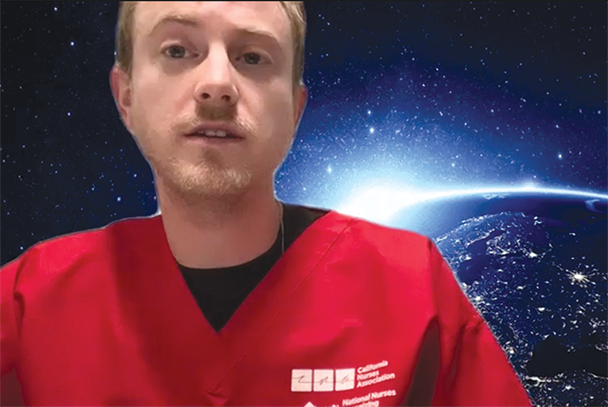 Olympia Medical Center nurse Luke Bowerman joined the calls for the hospital to remain open during the COVID-19 pandemic. (photo courtesy of the California Nurses Association)

“Olympia has been a vital member of this community for 70-plus years in one form or another and it would be a tragedy for it to go away,” said Luke Bowerman, a registered nurse in the Gastroenterology Laboratory who has worked at Olympia Medical Center since 2012. “Were Olympia to go away, patients would have to seek help elsewhere, and right now, in Los Angeles County, you may not be able to find that help because health care institutions are already overrun.”

Shenita Anderson, an Emergency Department nurse at Olympia Medical Center, added that the situation is already dire at the hospital because of the influx of COVID-19 patients, and the uncertainty about the hospital’s future has made the situation worse. Closing the hospital would have a detrimental effect on seniors, people of color and those in underserved populations, she added.

“We serve a diverse population of patients who have care needs often exacerbated by social determinants of health. We routinely take care of seniors, underserved and transient patients who come to our doors seeking assistance,” Anderson said. “Unfortunately, the proposed closure of Olympia will only exacerbate these inequities and it would be a great disservice to our most vulnerable. For some of our patients, the hospital, nurses and health care workers are the only people who see them, and the only place they may feel safe and cared for. I was shocked and deeply angered when I saw the notice on New Year’s Eve that stated in the midst of this pandemic ravaging our community, our state, our country, that our hospital planned to close. Closing Olympia Medical Center increases disparities disproportionately and impacts poor people and people of color.”

The California Nurses Association, which held the protest, provided statistics about patients at the 204-bed Olympia Medical Center. According to the association, 40% of people admitted at Olympia Medical Center are Black, 63% are over the age of 60, 60% are people covered by Medicare and 30% are patients covered by Medi-Cal. Nurses in the virtual protest said more than three dozen people with COVID-19 are currently being cared for at the hospital.

The announcement concerned elected officials, including Assemblyman Richard Bloom (D-Santa Monica), who has asked Alecto to postpone the closure. UCLA Health has offered to allow Alecto to maintain operations through the end of the year, Bloom said. Alecto, based in Irvine, has not announced what it plans to do. Olympia Medical Center directed inquiries to attorney Michael J. Sarrao, who represents the hospital’s ownership. A request to Sarrao for comment on potential new plans was not answered.

Due to the uncertainty, Bloom wrote a letter on Jan. 11 to Dr. Mark Ghaly, secretary of the California Health and Human Services Agency, asking the state to step in if an agreement is not reached by the end of March when the hospital is scheduled to close.

“Addressing the pandemic is and must be our overriding priority. Recent rough estimates predict that the current surge in hospitalizations will not peak until February. Assuming with optimism that this is accurate, we can project that hospital beds and personnel will still be a dire need and the health care system in a fragile or early recovering state,” the letter read. “Therefore, I call on the institutions involved to delay, or that the state require a delay, of the closure of Olympia until a thorough assessment takes place indicating an optimal transition plan that fully protects public safety, and that that plan guides the transition.”

UCLA Health confirmed in a statement it will allow Alecto to continue operations at the site but offered no further information about if or when that will occur.

“As health care workers who see firsthand the need for medical support services in a city that is surging with COVID-19, we have provided Alecto with the ability to keep Olympia Medical Center’s doors open to help manage the current surge in COVID-19 patients,” the statement from UCLA Health read.

UCLA Health said it plans to ultimately renovate the Olympia Medical Center campus into a facility offering inpatient and outpatient mental health services, according to the statement. An initial planning phase will begin this year.

“UCLA Health is committed to providing access to care for patients who need our services. With the addition of this campus, located in the Mid-Wilshire area, we have the ability to expand that access and add hundreds of health care jobs in L.A. County,” the statement from UCLA Health read. “This planning process, which will commence soon, will inform key activities including timing. We will provide regular updates to the community along the way.”

The UCLA Health statement further described possible plans that may be under discussion by the county to help keep the hospital staffed, but no details were provided and no announcement has been made about what role the county may have in ensuring the medical center stays open during the pandemic. Los Angeles County Supervisor Holly Mitchell, 2nd District, said shortly after the announcement that closing the hospital during a surge in cases “is not wise.”

Los Angeles City Councilwoman Nithya Raman, 4th District, said she is encouraged by news that UCLA Health is open to leasing the hospital to Alecto so it can remain open, and will continue to monitor the situation..

“Our office has regularly followed up on the sale of Olympia Medical Center since it rose to our attention after the new year,” Raman said. “We have reached out to Alecto to reiterate our strong support for no reduction in overall emergency services capacity in Los Angeles while COVID-19 is surging and ICU capacity in hospitals is at zero, and will continue to keep residents informed as we hear more.”

“At this point, we want the hospital to stay open by whatever means necessary, whether that means Alecto continues to lease the hospital from the current owner, which is now UCLA, or that means they allow UCLA to take the reins and accept capacity to keep the lights on, the doors open and us serving patients,” Bowerman said. “I’m a nurse. I’m not a businessperson, I don’t know the ins and outs of the sale of real estate. But I do know about caring for people, and that’s what I want to continue doing.”